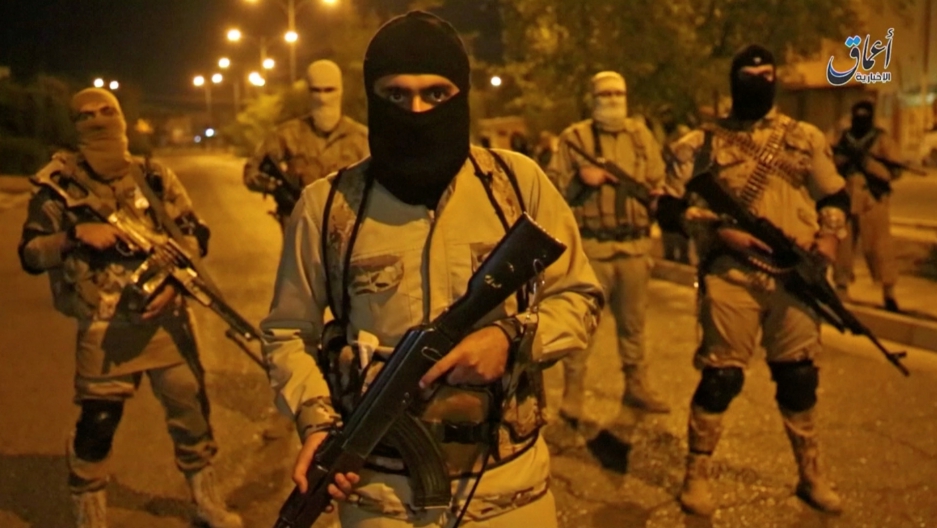 A still image taken from an ISIS video released through the group's Amaq news agency shows an unidentified militant addressing the camera. Video said to be shot in Mosul, Iraq, on October 18, 2016.

Citizen journalists inside Mosul say the government there, imposed by ISIS, is starting to break down. An offensive to drive the terror group out of the Iraqi city has been ongoing for 10 days.

But — who are these citizen journalists?

Patrick Osgood, editor for Iraq Oil Report, runs a team of Mosul reporters from his base in nearby Erbil. "We have a small network of Muslawis [residents of Mosul] across most of the neighborhoods of the city," Osgood says. "They have communicated with us in a very simple way: SMS and short phone calls and things."

The team, part of a regional network of local reporters and contacts organized by Iraq Oil Report, has been reporting news from Mosul that's been out of reach to the leagues of foreign correspondents embedded with the Iraqi military. The Mosul informants, isolated and unprotected, have filed reports while under the scrutiny of ISIS police.

Their cell phone dispatches have led to these sorts of recent headlines:

Now that ISIS is stretched, Osgood says, citizen journalists in Mosul are "more at liberty to speak from their homes now, firstly because the cell phone coverage throughout Mosul is vastly improved recently. And the Iraqi security services worked with cellphone providers there to get free credit and provide numbers."

But reporters inside the city still need to be circumspect. Journalism in Mosul right now is punishable by death.

"ISIS has consistently severely punished people who are thought to be providing information to the outside world," says Osgood, "and typically they make an example of them through executions. Or people are taken to detention sites and never heard of again."

Osgood praises his crew. "Muslawis are generally, I think, very keen for the outside world to understand what's really happening, and they are incredibly brave."

But the editor is under no illusion that these citizen journalists are necessarily objective. Osgood takes steps to verify their reports before he publishes. "We compare what we are doing with other networks of activists and journalists who are publishing through different outlets — mostly in Arabic," he says. "We try to verify some of the accounts that come in, of airstrikes, for example, where the US-led coalition publishes daily strike reports. We take a look at those and see if they ... line up."

Over time, Osgood says, the team has proven its reliability. "We've ... worked with the same people for about 18 months, and we've developed a trust relationship with them. But make no mistake about it," Osgood adds. "We have to caveat what we do in Mosul, because it does remain closed off to the outside world."

Even with caveats, Osgood says, the citizen journalists of Mosul are performing a critical service. "The importance of understanding what's happening inside that city outweighs the kind of doubt that we might have about a specific set of particulars of a specific report about something."