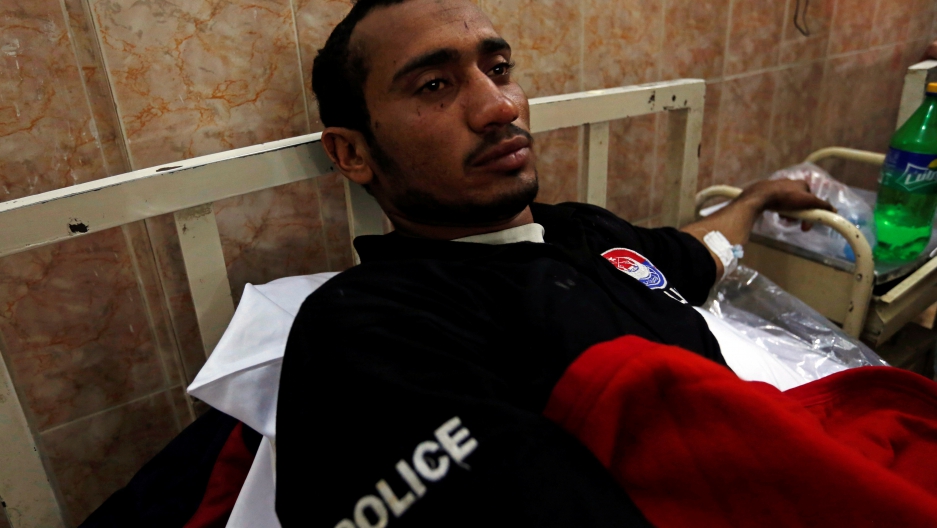 A police cadet injured during the attack on the Police Training Center lies in bed in a hospital in Quetta, Pakistan.

Suspected Islamic militants attacked a police academy overnight in the Pakistani city of Quetta, killing at least 61 and wounding more than 100. Most of the victims were cadets.

“Three suicide bombers went in, all wearing suicide vests, and they opened fire,” says Kathy Gannon, an Associated Press special regional correspondent for Afghanistan and Pakistan. “There was a gun battle lasting four hours. One of them detonated his vest when the army arrived. A second one went to detonate his vest but before he could, he was shot. The third one was also shot.”

Quetta is located in Pakistan's Balochistan province, which is a stronghold for several militant groups. It's not clear which of those groups, if any, is responsible for the attack.

“Now we have two different claims of responsibility,” Gannon explains. “One is the Islamic State. And the second is from a very little known group … called the Hakimullah group.”

The Hakimullah group is a breakaway faction of the Pakistani Taliban, which is also known as Tehrik-i-Taliban, or the TTP. According to Gannon, "most people who are familiar with militancy here in Pakistan say that it’s unlikely that that group would have the ability and organization to carry out such a coordinated and effective attack.”

“Neither claim has been corroborated,” she says.

The Pakistani army blames another militant group called Lashkar-e-Jhangv. But some are pointing fingers at the country's security forces, accusing them of fostering the very extremist groups now attacking the country.

"The Pakistani military has tolerated the existence of certain militant groups that these Pakistani leaders believe can help them in countering India's military," says Reuters investigative reporter David Rohde. "It's now out of control. It's a Frankenstein."

Rohde traces the problems of extremism in Pakistan to the Islamic militant groups that Washington first fostered with Saudi Arabia in the 1980s to battle Soviet troops in Afghanistan.

"The US has learned its lesson. There's debate about whether Saudi Arabia has learned its lesson about dealing with jihadis, but it seems that Pakistan's intelligence service still thinks that they can control them," Rohde says. "Pakistan might be trying to negotiate with some of these groups that it's had relationships with in the past, in terms of encouraging some militants to battle India, but they're not going to be able to negotiate with all of them, or crush all of them if they keep splintering."

Rohde was kidnapped by the Taliban while he was working in Afghanistan in 2008. His captors brought him across the border and held him in Pakistan. He says that since his time in captivity, Pakistan's militant networks have splintered dramatically. He thinks the country won't find stability until it reaches a detente with India and tensions subside in neighboring Afghanistan.

"The Pakistani military is so powerful inside the country because it's able to constantly draw on this sense of insecurity in Pakistan — that India is threatening it from the east and there's also propaganda that India somehow controls the current Afghan government," Rohde says. "So they'll back the Taliban, they'll back certain militant groups in the sense that they are saving Pakistan from India. If those tensions could come down you would have a much healthier, growing Pakistan."