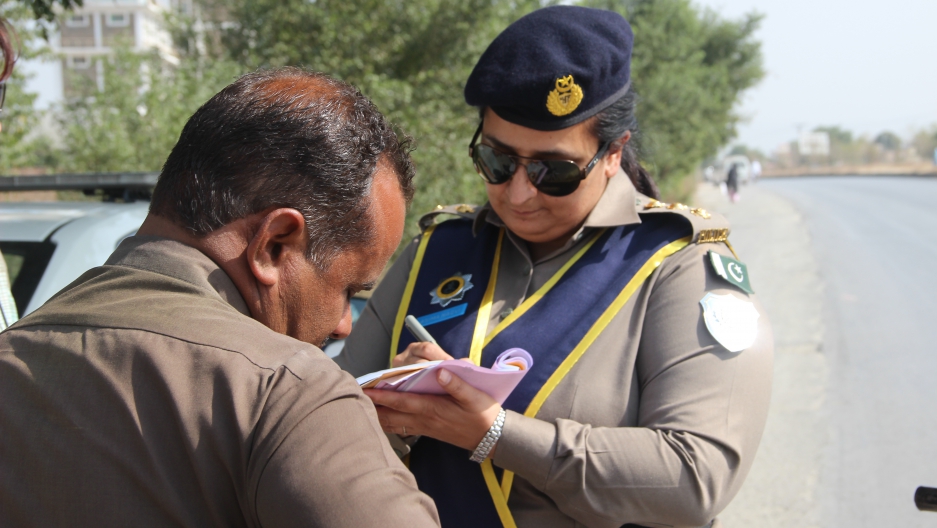 Asima Naqvi, is a senior patrol officer with the National Highways and Motorways in Pakistan. She deals with a citizen while on patrol about 15 miles north of Islamabad.

The stench of diesel is in the air. Asima Naqvi is standing on the side of a noisy highway in Pakistan, one of the few women on the road. She wears a stiff grey police uniform and avaitor sunglasses as she writes a ticket for a traffic violation.

Back in her patrol car, she has perfume spray in her purse for when the roadside smells grow overpowering. The feminine touch is a reminder that she is one of Pakistan's few female police officers in a man's world.

“I am the only female working in the field,” she said, as rickshaws and cattle cars whizzed past. “When I came here it was a big shock for these people.”

In most parts of the world, men traditionally dominate police and military sectors, and that is especially true in Pakistan, where fewer than 1 percent of police officers are women. But there’s increasing awareness around the world that this needs to change.

In 2017, the US State Department is planning to spend more than $8 million to increase the number of Pakistani women in police and security. That’s part of the $133 million the US wants to spend next year in places like Afghanistan, Nigeria and Pakistan. That money pays for running workshops for female officers, building women’s barracks and complaint rooms at stations, and buying vans so female cops like those in Asima Naqvi’s department can get to work.

Women police officers are better at building trust with local populations, decreasing human rights abuses and de-escalating tensions, according to Allison Peters from the Washington-based Institute for Inclusive Security, an advocacy group that has actively lobbied for the funding.

International studies have also found comparatively positive outcomes in police forces with more women officers. The United Nations has found the greater the number of women police officers in an area, the “more protection from violence women and children received following conflicts” because “women sometimes fear turning to male uniformed personnel for assistance.”

In the US, too, research backs the benefits of more women officers. 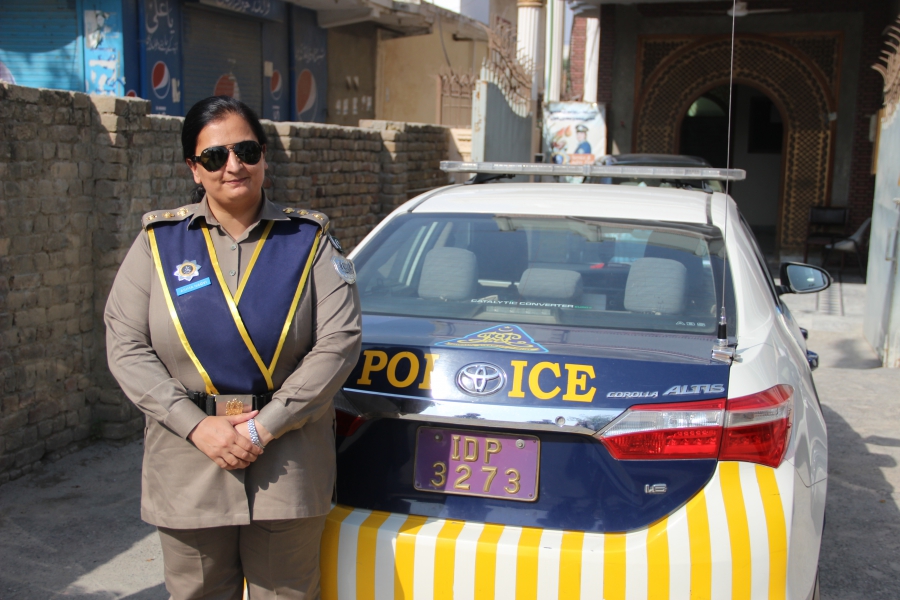 Women officers are less likely to use excessive force or pull their weapon there, research shows. They are defendants in lawsuits far less often than men, saving municipalities millions in legal fees. Their greatest potential impact is in addressing violence against women and sex crimes, which are not small in number. A third of women murdered in the US are killed by intimate partners. Domestic violence accounts for half of all violent crimes reported to the police each year. Two to three million women in the US are assaulted by their partners each year. Many are stalked.

About 13 percent of police officers are women in the US, and that’s lower than in many developed nations — but still much higher than in Pakistan.

Pakistan’s deputy inspector general of police — one of the highest ranking officers — is a woman. Yet, the number of women police officers has not increased since 2011. And many of the women on the job work at one of the 19 women’s-only stations across the country where they feel sidelined. Female officers at all but three of those 19 stations aren’t even allowed to file basic police reports. That means that women officers aren’t authorized in most cases to deal with the very cases that they are best at: sexual assault, rape and femicide.

Naqvi is a good example. A 15-year veteran of the National Highways and Motorways Police, she’s not exactly on the front lines of places where women officers are shown to be most effective.

In 2011, the US launched a women’s police program and ramped it up in 2015, deploying its first full-time gender advisor there. Separately, the US Department of Justice has trained more than 900 female Pakistani police officers at domestic trainings. That’s out of 18,000 people total. These have not been trainings specifically for women, but they have required at least 10 percent of the officers trained were women. Officials acknowledge that “obviously this doesn’t always happen.”

Naqvi says women should know their value and have the guts to let other people know. She hopes when girls see her on patrol, they’ll be inspired to stand up for their rights too. Maybe even as a police officer. “A journey of the thousand miles begins with a single step, and I am that single step.”

A previous version of this story incorrectly stated that Asima Naqvi carries a gun on patrol.