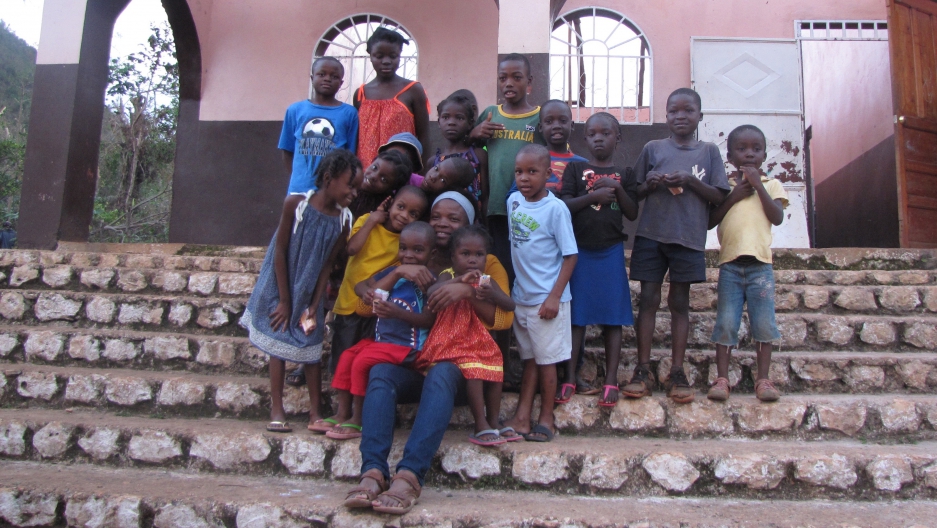 Ertha Papillon with kids from her orphanage. The roof was badly damaged in the storm.

When Hurricane Matthew passed over Haiti on Oct. 4, it pummeled hundreds of square miles of the country’s southwestern peninsula.

It’s such a vast region that well-intentioned government officials and aid groups have only reached a small portion of the 1.4 million people authorities say need humanitarian aid.

So some community leaders, themselves victims of the storm, are carrying the heavy burden of supporting their neighbors.

I had the good fortune of meeting one such person, in a place called Trou-Bois, in Duchity.

On a drive through southwestern Haiti, we are rushing to reach our destination, hours away. So we’re passing people on the road who wave their hands or yell things, like, "We’re hungry!"

So at random, I ask the driver to stop, anywhere, and we approach a house.

There, a group of men, women, and children are gathered on the porch. And the crowd grows when we arrive. They tell me they’re short on water and food, and they rattle off a list of other needs. But in the conversation, one name keeps coming up: Madame Ertha.

A young woman in the crowd named Monique Francois says so many people lost their homes that every night 250 cram into the house of Madame Ertha. “She’s the one who takes care of us,” the woman explains.

Another voice in the crowd says Madame Ertha got clothes for them after theirs were lost in the rubble. And then I hear a man say, “Here’s the Madame who’s responsible for us.” And a smiling middle-aged woman arrives, sporting bright, clean clothes and a touch of perfume.

Her name is Ertha Papillon, and she says, “Yes, I’m in charge.” She tells me there hasn’t been a single Haitian public official coming here to see what’s going on. “So all that’s being done in the community, it’s me that’s doing it, along with them.”

Papillon takes my hand and leads me up the road. “Two hundred and fifty people are sleeping in my house every night,” she says. “I’ll show you.”

We enter, and she first takes me into a room where a woman is lying on a mattress, with bandages on her hip and ankles. “She was hit by a piece of metal roof with nails in it and injured badly,” Papillon says.

The woman tells me the pain is so bad she can’t sleep at night.

Papillon is making use of her past experience as a nurse. “We dressed her wounds here, and we got some ibuprofen,” Papillon says, “but we’ll have to go to the hospital soon.”

She says there was also a woman with a broken foot. “We took her to a hospital in Mirebalais.” That’s more than five hours away.

We walk out into a large central room. “This is where everyone sleeps,” Papillon says. “We cleared out the chairs so everyone could fit.” Mattresses lean against the wall.

“After the hurricane, I ran out and found people in their homes who were dying or badly injured,” Papillon says. “I’ll show you a picture of a parent who died with his little child.” She pulls from her wallet a photo of a father and young son posing together in better times.

“They died of exposure in the storm,” Papillon says. “The child was 6 years old.”

She also tells me about a woman who died. "I put some hot water under her feet and a blanket on her,” she says, “and at 3 o’clock she died. For me it was a very, very difficult time in my life. Very hard.”

Now we’re heading down the hill to see Papillon's orphanage. And I’m beginning to realize that it’s true, she seems to be running everything here. 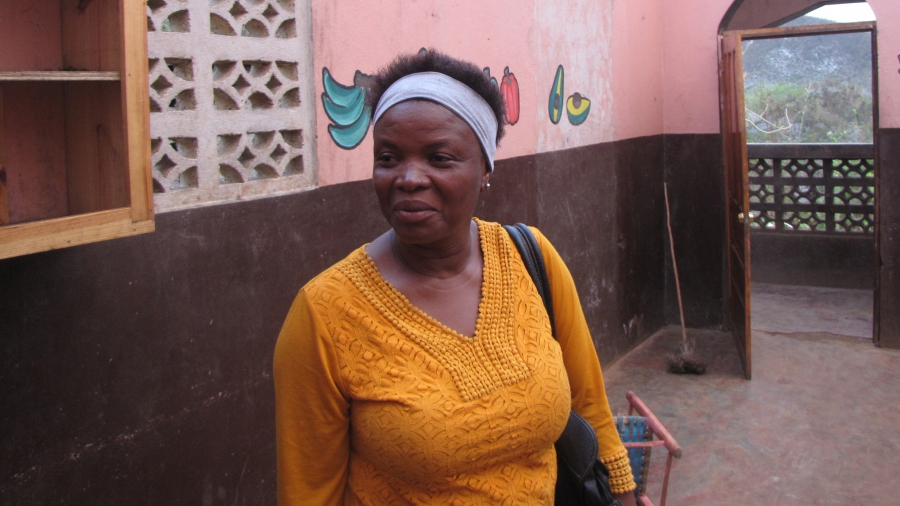 Ertha Papillon shows a visitor the hurricane damage at her orphanage in Trou-Bois, Haiti.

She says there are 18 children in the orphanage, all of whom had mothers who died in childbirth. She says she’s been able to reduce that maternal mortality through a nutrition and pregnancy center. (But now she fears malnutrition will go up again in the wake of the storm.)

Below the orphanage is a school Papillon founded in 1997. In 2010, she expanded it to absorb hundreds of students from Port-au-Prince, displaced by the earthquake.

Papillon grew up here, in Trou-Bois, and then spent time in Port-au-Prince and the US. But, she says, “I chose to return to live here.”

She says she wanted to help the community because she saw so much suffering and no one doing anything about it. She also wanted to run her family’s coffee plantation.

For her projects, a church in Illinois and an organization called Haiti Children’s Outreach raise funds. Now they’re stepping up the appeals.

Half of the orphanage lost its roof in the storm. It’s the same for the school. The buildings that remain are doubling as shelters for neighbors that lost their homes.

And local income is gone. Like her neighbors, Papillon lost almost all of her crops — coffee, yams, plantains, avocado trees.

Adding to the pain, a drinking water source broke in the storm. And now Papillon’s trying to get water bottles to the more remote houses.

Meanwhile, with food in short supply, some of the young men in the community have been halting the passing aid trucks by setting up roadblocks, and the police met with Papillon to try to get her to stop them.

“I try to convince them to not do that,” she says. “I can’t go every time to tell them to unblock the road because I have work to do, but yesterday I spent the day talking with them, and they said they can’t find food, so I went and got food for people in provisional shelter, for people who are suffering and have nothing.”

Papillon has two children of her own, now living in Florida, but she’s seen as a mother to the community.

"Manman" is what some locals call her, "mom" — a nickname she hasn’t warmed to.

“I don’t want them to say that,” she says. “I’m just providing a service because it’s really sad. The situation is really complicated.”