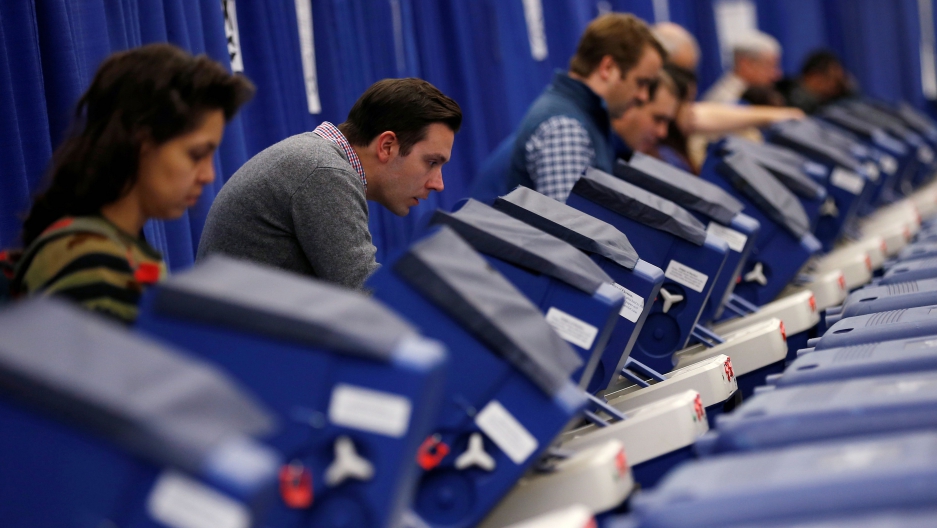 Voters cast their ballots during early voting in Chicago on Oct. 14, 2016.

Up until early October, Jonathan Jimenez, a one-time “Bernie or Bust” backer of Sen. Bernie Sanders, was set against voting in the presidential election next month. He’s changed his mind.

Like many young voters, Jimenez, a 24-year-old Los Angeles native, doesn’t like either of the major party candidates. And he’s torn because he feels a third-party vote could negatively affect the outcome of the election.

“I recognize the realities of what it is that people who supported Bernie look to accomplish, and what a Trump or Clinton election would mean for that,” Jimenez said. “I think if we want the political revolution that we got all hyped up about during Bernie’s campaign, the least thing we can do is vote for a candidate who upholds most of the values we want to uphold.” So, he’s decided to vote for Hillary Clinton, after all.

In the last few weeks of a divisive, often negative campaign, as polls show Clinton with an increasing lead, the wild card on election day could be whether people are motivated to vote. Two trends make the turnout of young voters — the millennial generation of 18- to 34-year-olds — especially important to the outcome on Nov. 8.

First, that generation is growing and is now so large, it has voting power that rivals the baby boomer generation. Millennials make up 31 percent of eligible voters, according to the Pew Research Center. In the last election, they made up just 19 percent of potential voters.

READ MORE: Could Trump’s attack on ‘political correctness’ help the US discuss race?

The second trend, though, could undercut their potential voting power. Young voters typically have the lowest turnout on election day, of any age group, according to Pew. In the last election, 69 percent of boomers turned out, while just 46 percent of millennials went to the polls.

Some students at the University of Nevada, Las Vegas (UNLV), the site of the final presidential debate on Wednesday, say that social media is playing a role in their decision to vote or not. Lizzie Curio, 19, wasn’t registered to vote until singer John Legend and supermodel Chrissy Teigen visited the UNLV campus, encouraging students to be politically active.

Be part of the UnConvention World Vote

Have your vote counted in 2016's first global straw poll for US president
Vote Now!

“I feel like people my age are on Twitter a lot and say stuff, but don’t put actions into words. That’s why people my age don’t go out and vote,” Curio said. “Seeing people that you look up to definitely encourages you more, because then you see them all over Twitter [saying,] like, ‘do this, do that,’ and they definitely have an influence on what you think.”

Even though both major party candidates used social media in their campaigns, with Trump known for his early morning tweet storms, many millennials remain unimpressed with both campaigns’ efforts to reach out to them. And many feel the presidential candidates haven’t addressed issues important to them.

“People feel frustrated with the establishment, so they don’t feel any type of need to participate in that process,” Jimenez said. “There’s no sense of empowerment that young people get from voting.”

Hailey Fish is among those millennials who say they will not cast a ballot in November. Although the Las Vegas native called it her civic duty and responsibility to vote, she said the candidates on the ballot make it impossible for her to choose. “I’m not going to be pleased with either one … I don’t want to be someone that says, ‘Oh, I made that happen.’ Neither are good for our nation,” Fish, 18, said. “I know it’s important, but it’s not what I want my time to go to.”

READ MORE: We asked millennials to share their slogans for the 2016 election. We want yours, too.

There’s another reason young people don’t vote, according to UNLV student Randall Rowlins, 22, of Phoenix, Arizona — lack of education and lack of experience. “Adults are the primary taxpayers, and so they understand the importance of voting, and it doesn’t necessarily hit young people as hard,” noted Rowlins.

In fact, a study by the US Elections Project found that the higher someone goes in their education, the more likely they are to vote. In 2014, 21 percent of millennials had a college degree compared to 33 percent of Generation Xers (ages 35 to 50), according to Pew Research Center.

Whether young people decide to vote out of a sense of civic duty, to support a candidate they love, to keep a particular candidate from winning, or because a celebrity told them to do it, their turnout could make a big difference simply because of their numbers. And not just for the presidency. Their votes for “down ballot” candidates — those running for state and local offices — could make or break the ability of the next president to pursue an agenda of change.

Your vote is your voice, argues Dan Justin Shabiano, 20, who plans to vote in his first election this November. “Your voice is better being heard even if it’s not an opinion that‘s shared with a lot of other people.” Even, he said, if it’s a rejection of all the candidates.

“I feel like there are people who are very unhappy with what’s going on in our politics and government, but they refuse to voice that,” said Shabiano, a UNLV student. “They have no basis to make such complaints and other claims when they didn’t make it known that they supported none-of-the-above.”

“Every voice counts,” he said, “and that’s what freedom of speech is for.”