Students watch an immersive video at 'Forced From Home,' an exhibit run by Doctors Without Borders.

On a sunny fall day, people are strolling along the Long Wharf in Boston's Waterfront area. Cruise ships are taking people on tours of Boston Harbor while seagulls glide overhead.

But at the end of the wharf, there's a rather strange sight — a refugee camp. There are white tents, fences with razor wire, and staff from the international medical group Doctors Without Borders patrolling the area.

Tatiana Chiarella is a nurse from Brazil who has been working for Doctors Without Borders for about three years.

"I've been [to] Malawi, South Sudan, Yemen, Libya, and I just got back from [the] Syrian border," she says. In all of these areas, she worked with many refugees.

Now Chiarelli is in Boston, working at an exhibit called "Forced From Home." The aim is to help people understand what it's like to be a refugee — to uproot your family and embark on a perilous journey.

Irene Koistinen is a high school senior who is here to experience the exhibit. She says she's interested in Syria and the refugee crisis, but she doesn't come across much news about it.

"In the media that we use, it's just not represented," she says. "They don't talk about it at all."

Grace Steeves, a high school junior, says she gets much of her news from Facebook, Instagram and Snapchat. But her Facebook news feed rarely has updates on world news.

"A lot of it's just my mom sharing stuff on my timeline," she says, laughing.

Chiarella welcomes the students to the exhibit. She asks them to close their eyes and imagine they are living in a war-torn country. All of a sudden, they're under attack. They only have time to grab five things. 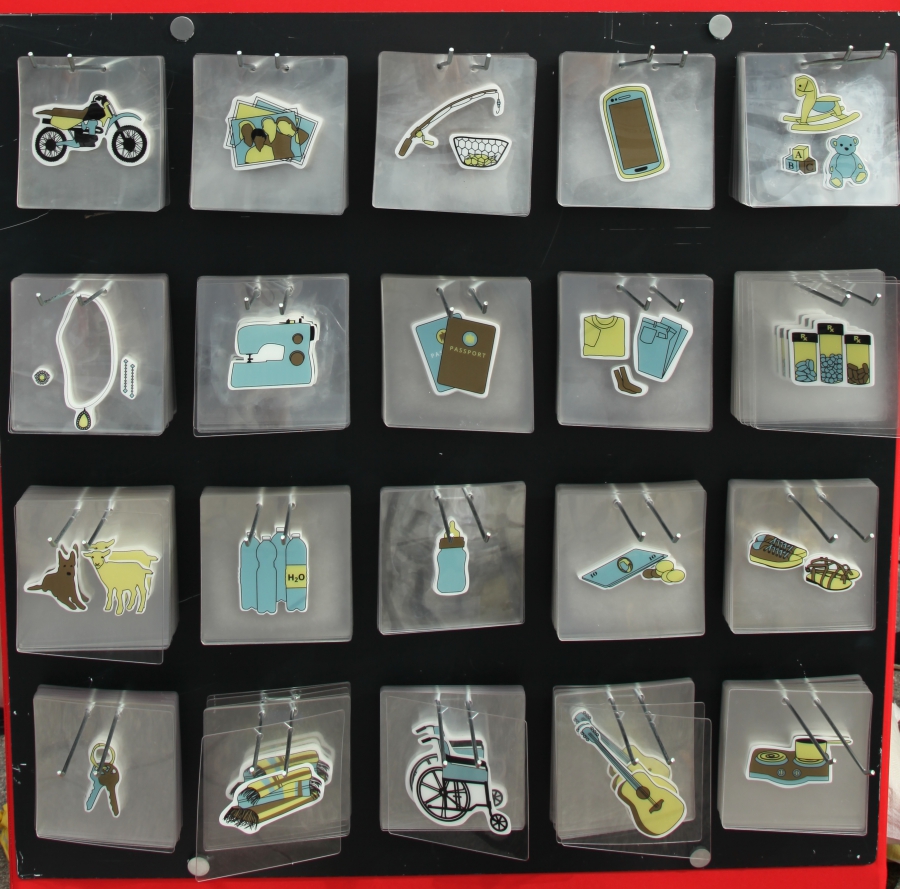 Visitors to the exhibit must choose five items to bring with them on their journey.

"Let's go! Five items, quick!" Chiarella shouts. But wait, she says, there's not enough room, you can only bring four.

Steeves chooses to give up her blanket, while keeping clothes, water, medicine, and her passport.

"Clothes can also serve the purpose of keeping you warm, so I thought the blanket was least important," she says.

The students pile into a motor boat like the ones many refugees use on dangerous ocean crossings. They're told to imagine being crammed in there for three full days. They must also pay the driver with another item. 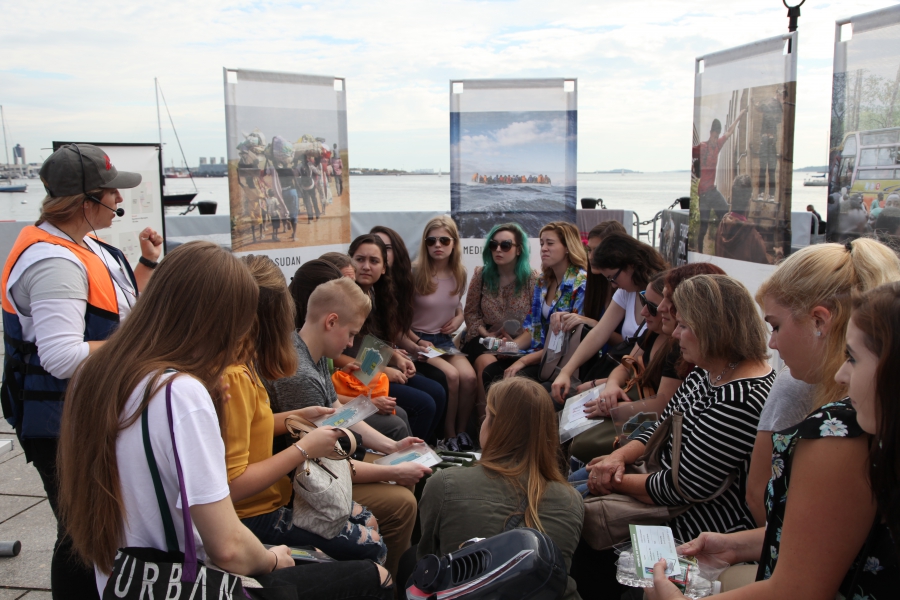 Students pile into a motorboat used by refugees to make dangerous ocean crossings. Tatiana Chiarella, an emergeny room nurse from Brazil, is their guide.

Steeves decides to give up her clothes.

"Assuming you have what was already on your body, you just try to make it through with that," she says.

The students cross a simulated border marked by a fence with razor wire. They feel just how heavy a 50-pound jug of water is. They learn how to use a pit toilet. And they hear about all the dangers they might face. 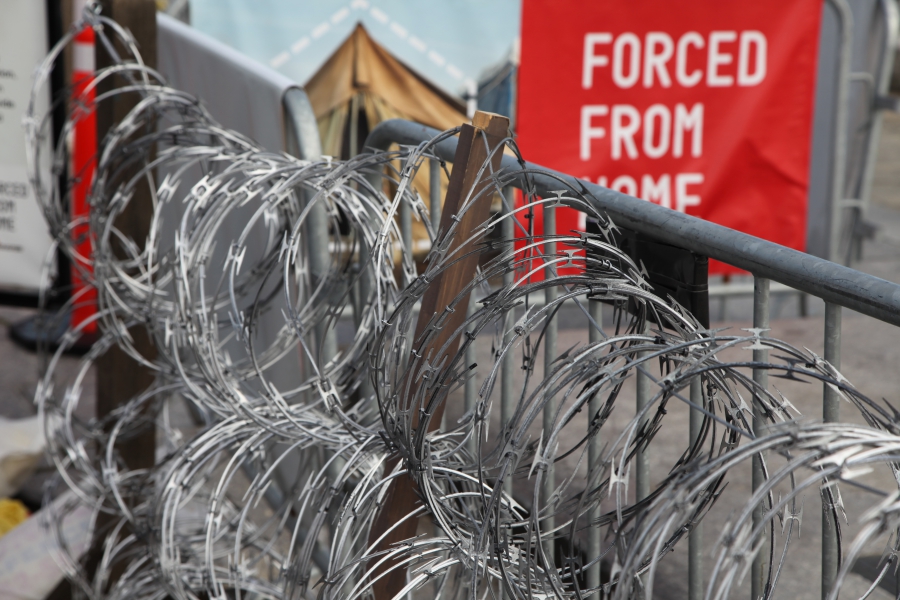 A simulated border is marked by a fence and razor wire.

Finally, an hour after they started, the students arrive at a simulated refugee camp. Grace has only one item left — water.

"I figured it was sort of like a life or death matter, and this would in the long run help me the most."

The students follow Chiarella into a white tent. There are blankets laid out on the ground, and homemade toys scattered everywhere. 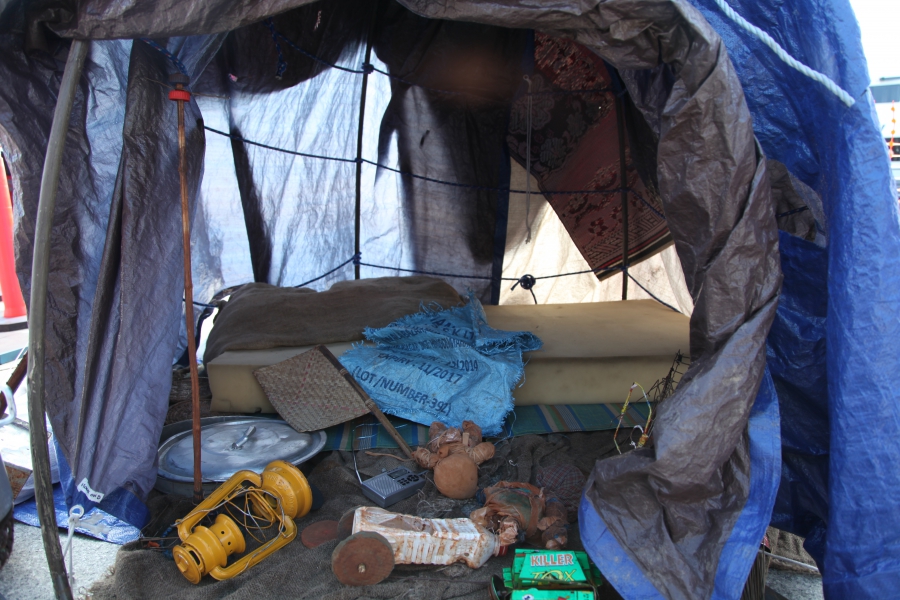 A tent in the simulated refugee camp.

Chiarella points out how crowded it is, and highlights one of the biggest dangers of living in a refugee camp: fires made for cooking inside the tents. People get sick from inhaling the smoke.

"You also have children running everywhere, so we have many domestic accidents," Chiarella says. "Women and children get burns because of this, and some people die from fires that spread very quickly from tent to tent."

The students exit the tent and make their way toward their bus. Steeves says she found the exhibit fascinating.

"It's really eye-opening, seeing everything that they go through, and how different it is than what we go through. It's incredible."