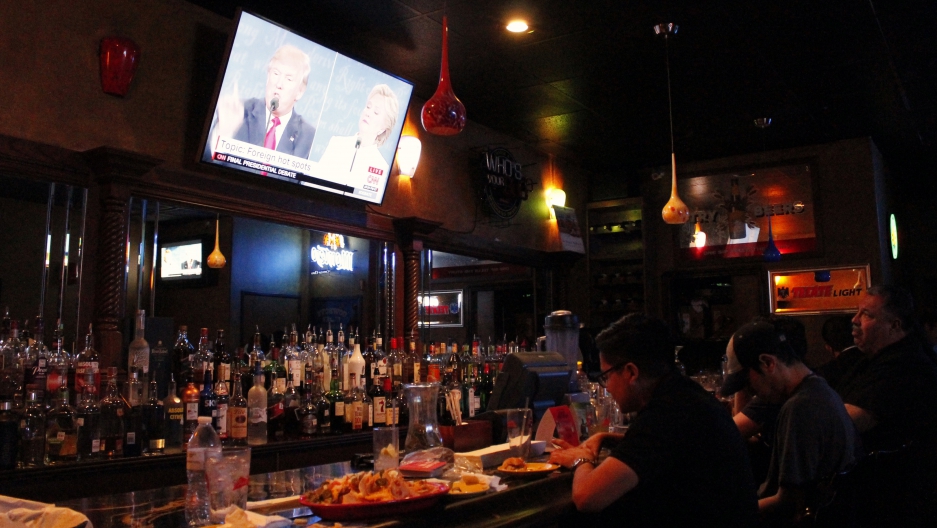 About 40 people attended a debate watching party hosted by a local Republican group in McAllen, Texas on Wednesday evening. The Rio Grande Valley has a mostly Latino population and tends to lean Democrat. This year, the whole state may be leaning that way as well.

Her grandmother came to the US by swimming across the Rio Grande, but Cedeño says it wasn’t as dangerous for people crossing as it is now.

“Those women are getting raped, they’re getting abused and some are getting murdered for trying to do it the illegal way,” says Cedeño. “There is a system in place to do it the legal way and for the safety of all those people who want to come into America.”

Cedeño is one of about 40 people squeezed into a room at a Mexican restaurant in McAllen, in the Rio Grande Valley of south Texas near the Mexico border, to watch the debate. They are mostly members of the Hidalgo County Young Republicans and, for the most part, support Trump.

But Cedeño and her political compatriots are more and more in the minority where they live. Texas is generally a red state, but according to recent polls, the state might go blue for the first time since 1976. Democratic candidate Hillary Clinton has been endorsed by the Dallas Morning News and is taking out ads in Dallas, Houston, Austin, San Antonio and online.

Cedeño on what she wants to hear from the candidates.

The Rio Grande Valley is largely Latino and is one part of the state that tends to lean Democrat.

Twenty-six-year-old Elijah Israel Casas is the president of the Hidalgo County Young Republicans. He says Trump is the better candidate to deal with the issue of immigration.

“[Clinton] wants to give amnesty, which is a disaster and very unfair to all of the people that are waiting in line for many, many years,” Trump said during the debate. “We need strong borders.”

Trump’s immigration proposal centers on building “an impenetrable physical wall on the southern border.” It also includes increasing detentions and deportations, ending the Obama administration executive action for deferring deportation for people brought to the US as children, known as DACA, and tripling the number of Immigration and Customs Enforcement agents.

Casas says both parties have used the topic of immigration as a political football during this election cycle.

“What I like about Trump is that he is not afraid to say how it is, we have an issue here,” he says.

Casas on what he wants to hear from the candidates.

Clinton, though, says those policies would create a police state. She advocates continuing to deport criminals while creating a path to citizenship for undocumented immigrants who meet certain criteria. She says she will introduce comprehensive immigration reform in her first 100 days of office.

“Bringing undocumented immigrants from out of the shadows, putting them in the formal economy will be good because then employers won’t exploit them and undercut Americans’ wages,” Clinton said in the debate.

For the voters in this restaurant, these issues hit close to home. Officials apprehended 408,870 people along the southwest border in fiscal year 2016, according to new data from the US Border Patrol. Last year, 331,333 people were apprehended. The Rio Grande Valley Border Patrol sector is the busiest in the area, especially for migrants fleeing violence in Central America. Agents apprehended 36,714 children traveling alone in the Rio Grande Valley last year, along with about 52,000 adults and children traveling together. 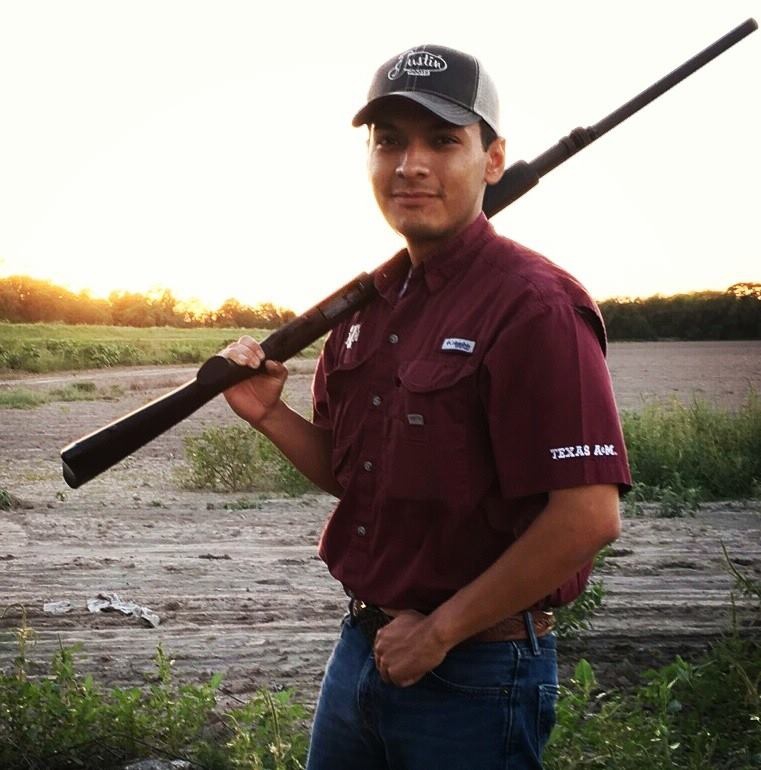 Elijah Casas is the president of the Hidalgo County Young Republicans. He says, regardless of your party affiliation, civic participation and voting are really important. He made an unsuccessful run to represent District 41 in the Texas House in 2014.

Casas says Barack Obama ran his presidential campaign on the issue of immigration reform, but ended up becoming the "deporter-in-chief" and solved nothing, which caused problems for those trying to enter the United States.

“When we have individuals sneaking into the US, because that is their [last] resort, out of desperation perhaps, and to end up dying of dehydration in the south Texas brush, that is a failure of our government to implement an effective immigration system,” says Casas.

More: Is Obama really the 'Deporter-in-Chief?' Depends on whom you ask

Also: Why would any parent send their kids on the deadly trip to cross the Mexico-US border?

In pictures: Five images that show how complicated a giant border wall would be.

Casas says he sympathisizes with the issue on a human level because his mother is an immigrant who was born in Reynosa, Mexico.

“It took her a very long time to get everything done and to get here legally, but she got it done,” Casas says. “I do see it as unfair to those immigrants who may or may not be going through the same thing, however they’re trying their best to obey our laws.”

Cedeño says she knows the topic of immigration is a difficult and touchy subject, but says it’s something that needs to get fixed because it’s important to put everyone’s safety first.

Cruz Quintana, age 59, is also endorsing Trump and says he has had his fair share of disagreements within the family, but they make it a point to talk it through.

“You’ve got to move on, or otherwise you’re going to cause rifts and divisions and it’s unnecessary,” Quintana says.

After the debate, Quintana and Casas say they were satisfied with Trump’s performance and were glad the candidates discussed substantive issues.

“A lot of people tend to look at this election as just another presidential election, but the reality of it is that we got something a little deeper than that,” says Casas. “The Supreme Court nominee, depending on who the eventual winner might be, will probably be sitting on that bench for over 40 years, so that person is going to have a lot of sway and tilt the court either way.”

Casas says he enjoyed the portion of the debate about monetary policy and says voters should question Clinton’s plan to tax the upper class, when she gets large contributions to the Clinton Foundation and from Super PACs. He says if the upper class is taxed it will cause less investment.

He’s not swayed by Clinton’s critique that Trump started out with loans from his father. Trump says he borrowed $1 million; the Wall Street Journal reports that in his early years he actually borrowed about $14 million.

“If you, or anyone else, were to give anything to your children you would expect them to do something productive with it,” says Casas. “We’ve seen a job creator. Yes, he’s failed, but that’s business and you take risks and you make investments.”

Details about Trump’s companies are scarce because they are privately held, but his record does have both successes and failures. His companies have filed for bankruptcy six times, according to PolitiFact.

But Casas also says the Clintons don’t understand the community of the Rio Grande Valley and the only reason they visit the area is to meet with local millionaire Alonzo Cantu for campaign contributions.

“Locally, in the Valley a lot of us have a common upbringing and that’s not something that I can say is wealthy,” says Casas. “They’re humble beginnings, we work for what we have, we work very hard and we’re honest people.”

Clinton visited the Rio Grande Valley last year for a private fundraiser in Edinburg; no public forum was held. Clinton also visited the area in 2008, where about 2,000 people came out to show their support for her in McAllen.

Trump has not visited the Rio Grande Valley during the campaign, but did stop by Laredo, Texas last year, which is about 100 miles away.

Casas says his values align with Trump’s viewpoints and is one of the reasons he strongly supports him.

“That’s the work ethic I know our community has and I think with the policies that Donald J. Trump is looking to implement, I know we’re going to see that growth because for too long communities like ours have been exploited by politicians,” he says.

However, Casas says he has some advice for all voters, regardless of their party affiliation.

“We need to get away from the straight-ticket party voting because it is corroding our republic,” he says. “We need to look at each and every candidate on the ballot and we need to study them. This is your civic duty as a citizen of this country.”