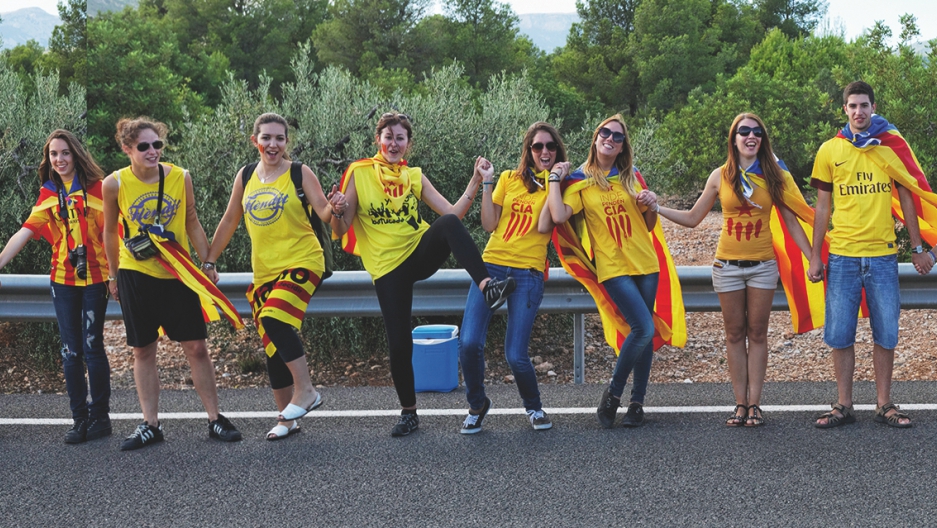 Catalans who want to separate from Spain join hands as part of a human chain across Catalonia on Sept. 11, 2013.

About 1.5 million people clasped hands, creating a human chain that stretched 250 miles through Catalonia to demonstrate they no longer wanted the northeastern region to be part of Spain.

It was 2013, and American writer and translator Liz Castro was a link in that chain.

She said it was one of the most remarkable experiences she’s had fighting to make her adopted home a new European nation.

“I think we really proved to ourselves that we had this mobilizing ability, this organizational capacity,” she said. “And people were happy.”

The positive spirit of the Catalan separatist drive is what Castro aimed to capture, through anecdotes and more than 500 photos, in her recently published book, “Many Grains of Sand: A sourcebook of ideas for changing the world, tried and tested in Catalonia.” She wrote English and Catalan editions of the book.

Castro, whose great-grandparents immigrated to America from southern Spain in the early 1900s, started learning the Catalan language as a college student. She visited and then moved to Barcelona in 1987, married a local and then moved to western Massachusetts in 1993, raising multilingual children.

The family traveled back and forth for years, and soon social media made it easier to keep up with current events from abroad before they moved to Barcelona for a more permanent stay in 2013. It was in 2009, in the midst of the recession, that she saw a sea change on the question of Catalonia’s independence from Spain.

“All of a sudden, people start to think that it’s a real possibility, and there's this growing movement,” she said. “I just found it really interesting. I wanted to follow it.”

She started translating social media posts, news articles and other information about the separatist push for an English-speaking audience who might wonder, why do all these people want to leave Spain?

“Because they consider themselves to be a people, a nation,” Castro said, “and they want, just like the Americans before the Revolutionary War wanted, to feel represented, and they don’t.”

The changes separatists seek include the right to have their children primarily taught in Catalan. That's controversial because many families in Catalonia speak only Spanish.

They also demand the right to control how their tax revenues are spent and to pass laws that can’t be overturned by Spain’s central government.

A candle flag lit by independence activists burns in Vic, a town in central Catalonia, on Oct. 12, 2012.

As Castro’s book shows, it’s a distinctively colorful, loud and nonviolent campaign. Advocates are often dressed in the cheery yellow that for them symbolizes the push for independence. They like to sing patriotic songs in city squares. And they go on long-distance bicycle rides. They make music videos and murals and massive candle mosaics.

In November 2014, when Spain’s Constitutional Court banned a planned, citizen-led poll on independence, they banged pots together from their windows at the same time for five nights straight.

This mural, inspired by a design by Jordi Calvís and Josep Maria Ganyet, was painted in the Catalan city of Reus ahead of the Nov. 9, 2014, independence poll.

However, not all Catalans want to split from Spain. That 2014 poll, which ended up happening with the help of volunteers, showed that 80 percent of the 2.3 million people who voted (of 5.4 million eligible voters) wanted Catalonia to be an independent state. But when Catalonia’s then-president called for a legal referendum in the form of parliamentary elections, only 48 percent of voters chose pro-independence parties.

In July, some Catalan legislators stormed out of the parliament before an important vote on nationhood. Opposition lawmaker Ines Arrimadas tweeted that pro-independence parties "want to take us not only out of Spain and the EU but out of the 21st century and modern democracy."

Still, Castro and other secessionists are hopeful. Despite the Spanish government’s threats of legal action, Catalonia’s president and parliament plan to hold another referendum next fall.

“These are people who say, this is a democracy, I want to have my voice heard,” Castro said. “And there's a lot of us, and we believe, and we're going to make this happen.”