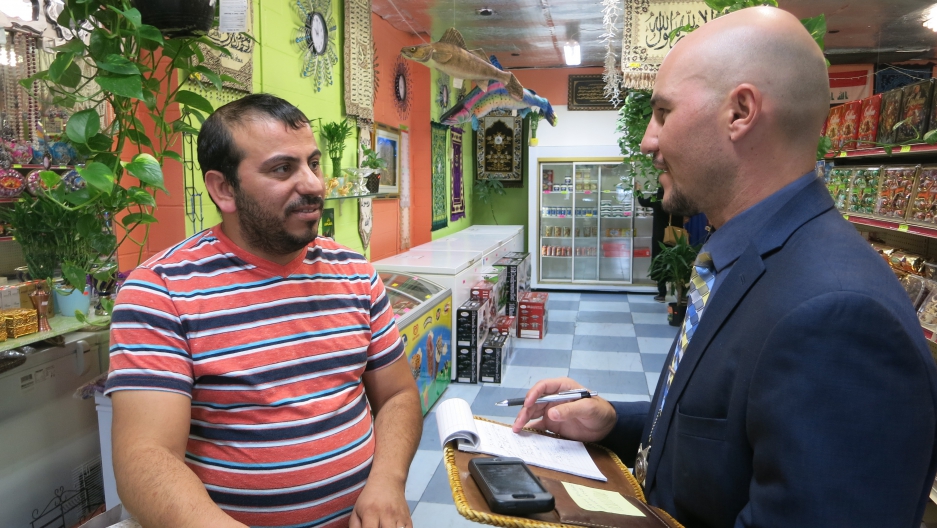 When I went for a ride-along with Officer Dustin Robinson of the Boise Police Department, I was waiting for a cop car to come pick me up. Much to my disappointment, he showed up in an unmarked SUV, and he was wearing a coat and tie. It makes sense though: He wants to put the refugees he works with at ease.

“Police cars can look intimidating to someone who has been traumatized by law enforcement or military,” Robinson said. “And the same thing goes with the uniform, it looks very paramilitaristic. You have your firearm fully displayed.” Robinson keeps his gun concealed under his sport coat.

Nearly 800 refugees have come to Boise in the past year. They come mainly from Congo, Syria, Iraq, Nepal, Somalia, Myanmar and Burundi. They’re resettled in Idaho because of the cheap housing and low unemployment.

Robinson’s job is to build relationships with Boise’s growing refugee population. He teaches them classes about law enforcement, goes to banquets with them and says he spends time particularly with African refugees who play soccer.

“We go and sit in the park for an hour before their soccer games or their soccer practice, and simply have questions — question and answer period,” Robinson said.

On this day, he was visiting a corner grocery story owned by an Iraqi refugee. We entered and Robinson greeted the shop owner’s 7-year-old son and offered the boy a police sticker.

Robinson, who has a shaved head and a goatee, is tough looking, but he’s also super friendly. After a few minutes of casual conversation, the shop owner started to open up and tell Robinson about problems he’s been having. His car tires were slashed with a knife. The man said somebody also threw sewage on his picnic table in front.

“Did you call the police?” Robison asked.

The man had not. The incidents happened several months ago.

Communication between the two men started to break down, so Robinson called an Arabic interpreter on the phone. Robinson explained to the man how the police could help.

“I will let other police officers that drive around this area during the night know what happened so they can watch the building for you,” said Robinson. He also gave the man his business card with his cell phone, but instructed him to dial 911 in case of an emergency.

All told, we were at the shop for about 30 minutes. The shop owner seemed happy with the exchange. Back in the car, Robinson said this happens a lot — refugees are afraid to come to the police, but open up to him. He’s built some street cred.

“In US customs, police officers are often times called by ‘officer’ and their last name,” Robinson said. “But I get called ‘Officer Dustin’ by almost every refugee that I encounter. And I don’t know if it’s just because there’s a comfort and a trust level there, but I know that the previous refugee liaison officer was called ‘Officer Shelli.’” 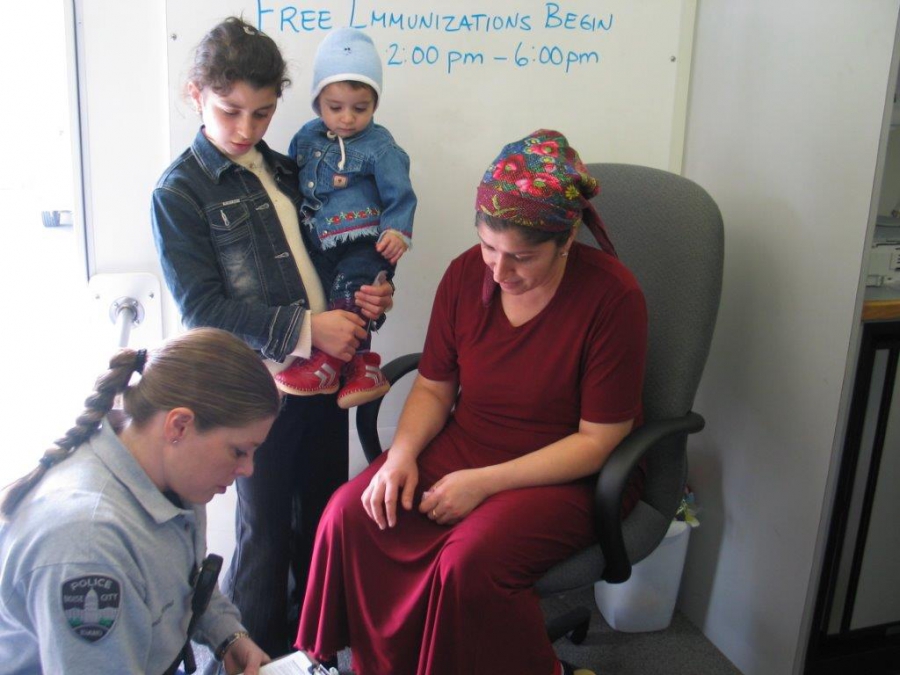 That’s Detective Shelli Sonnenberg with the Boise Police Department — she hatched the idea for the refugee liaison position a decade ago. At the time, she was a community policing officer in a part of Boise with a large refugee population. She said some refugees didn’t trust the police, others didn’t understand what they do.

“In some of the cultures, for example the Somali-Bantu community, the elders took care of the problems, it wasn’t a police matter,” said Sonnenberg. “And it was difficult to walk in when they had always done things through an elder. And now you have a police officer coming in and deciding what the outcome’s going to be.”

She said police learned to respect what matters could be handled internally by the Somali community. And Somali refugees came to understand when the police needed to step into a situation. Sonnenberg described some other challenges.

“Some of the refugees came from actual refugee camps, and if something was important to you, you took it into your home at night and kept it safe. Well, in America, you have plants outside, and chairs outside, and bicycles outside — that doesn’t mean you don’t want it, it’s just perhaps decoration. And so those things were disappearing in some of the apartment complexes. They thought they had a theft issue, when actually it was more of an educational issue.”

I asked incredulously: So refugee were taking plants from other people?

“It was more like wind chimes, things that were pretty and maybe different and not something that they had back home,” Sonnenberg said.

By the numbers, Boise is a very safe community. The Boise Police Department can’t prove statistically if crime has been reduced because of the refugee liaison officer. Nor can they say if Boise’s population as a whole is safer due to increased outreach to refugees.

“This is how I look at it,” Sonnenberg said. “I think that in the beginning when [refugees] weren’t reporting, we didn’t know crime was occurring, whether that’s to them or by them. And how are we making a safer community if our head is in the sand?”

It’s clear that other cities agree with her. Besides Boise, cities like San Diego, Portland, and Fargo, North Dakota, also have special officers assigned to their refugee communities.