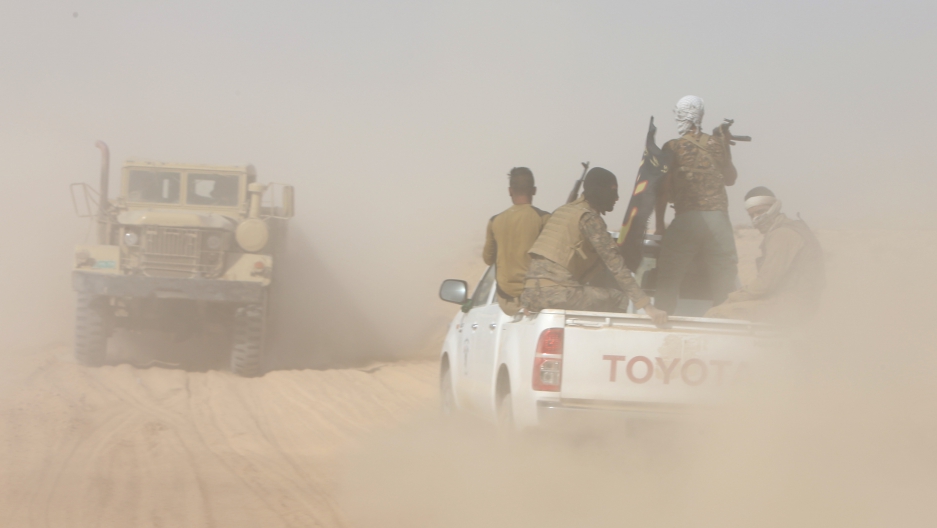 Iraqi army personnel ride on military vehicles in Qayyarah, during an operation to attack ISIS militants in Mosul, Iraq, October 19, 2016.

Jihadist leaders are fleeing Mosul, a top US general in the coalition battling ISIS said Wednesday as Iraqi forces closed in on the northern city.

Mosul was where ISIS supremo Abu Bakr al-Baghdadi declared his "caliphate" two years ago, but is now the group's last major stronghold in Iraq.

Iraqi Prime Minister Haider al-Abadi, who announced the launch of a broad offensive to retake the city on Monday, visited the front line on Wednesday.

In the biggest Iraqi military operation in years, forces have retaken dozens of villages, mostly south and east of Mosul, and are planning multiple assaults for Thursday.

"We are telling Daesh (ISIS) that their leaders are abandoning them. We've seen a movement out of Mosul," said Major General Gary Volesky, who heads the anti-ISIS coalition's land component.

He told reporters in a video briefing that the many foreigners among the 3,000 to 4,500 ISIS fighters would likely end up forming the core of the holdout jihadist force.

Volesky noted that the Iraqis would screen anyone leaving Mosul, and attempts by foreign fighters to blend in to an expected exodus of displaced people would be thwarted.

"It's difficult for them to blend into the local population based on the number of different types of foreign fighters that there are," he said.

Hundreds of thousands of civilians were still trapped in the city with dwindling supplies, many sheltering in basements as air strikes intensified on ISIS targets.

'Cut off from world'

"We couldn't sleep last night because of the air strikes. The explosions were huge," said Abu Saif, a 47-year-old resident contacted by AFP.

"Many families are starting to run out of some basic food goods, there is no commercial activity in Mosul — the city is cut off from the world," he said.

So far only a trickle of civilians have fled the fighting but aid organisations fear being overwhelmed by what could be Iraq's biggest wave of displacement yet in nearly three years of violence.

East of Mosul, forces were poised for an assault on Qaraqosh, which lies about 10 miles away and was once Iraq's largest Christian town.

News of the move to recapture Qaraqosh sparked jubilation among Christians who had fled the town, with many dancing and singing in the Iraqi Kurdish city of Erbil on Tuesday night.

Units from Iraq's elite counter-terrorism service, which has done the heavy lifting in most recent operations against ISIS, were poised to flush jihadists out of the town, officers said.

"We are surrounding Hamdaniya now," Lieutenant General Riyadh Tawfiq, commander of Iraq's ground forces, told AFP at the main staging base of Qayyarah, referring to the district that includes Qaraqosh.

"There are some pockets [of resistance], some clashes, they send car bombs — but it will not help them," he said.

Qaraqosh was the largest of many Christian towns and villages seized by the jihadists who swept across the Nineveh plain east of Mosul in August 2014.

The mass exodus it sparked displaced a large proportion of Iraq's already dwindling Christian minority, sending most into the neighboring Kurdish region.

The "caliphate" Baghdadi proclaimed in Mosul's Great Mosque in June 2014 once covered more than a third of Iraq and parts of Syria.

But it has been shrinking steadily for more than a year and retaking Mosul would be a major setback for ISIS, all but ending its experiment in statehood.

"IS simply has too many enemies with the world arrayed against it," said Aymenn al-Tamimi, a jihadism expert at the Middle East Forum.

Tens of thousands of personnel are involved in the operation to retake Mosul, far outnumbering ISIS fighters.

World leaders and military commanders warned that — despite signs that early progress in the Mosul offensive was faster than predicted — the battle could be long and difficult.

After clearing towns and villages on the outskirts of Mosul with air support from the US-led coalition, Iraqi forces are expected to besiege the city before entering it.

Iraqi forces may allow fleeing ISIS fighters an exit to the west in a bid to minimize human and material losses.

But the chief of Russia's general staff, Valery Gerasimov, argued it was "necessary not to drive terrorists from one country to the other but to destroy them on the spot."

Russia, he said, was focusing on "possible attempts by fighters to break out of Mosul" and "freely leave the city in the direction of Syria."

Many civilians have been able to flee the wider Mosul region to safer areas, with some desperate enough to seek refuge over the border in war-torn Syria.

"Thousands of desperate Iraqis are fleeing to a filthy and overcrowded Syrian refugee camps in an effort to escape the Mosul offensive," the Save The Children aid group said.

It said about 5,000 of them had reached the Al-Hol camp inside Syria near the Iraqi border in the past 10 days.