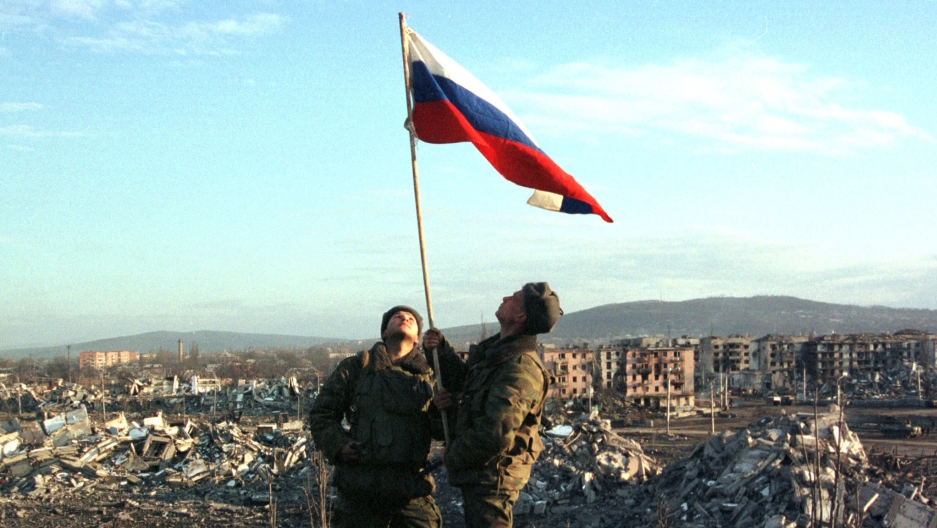 Russian soldiers raise the Russian flag over the rubble of Grozny, February 27, 2000.

Secretary of State John Kerry has criticized Russia for pursuing what he called a "Grozny strategy" in the battle underway for control of the Syrian city of Aleppo. It's a reference to Russia's actions in Chechnya decades ago, which perhaps could be paraphrased as “peace through obliteration.”

The Russians are not happy about it.

"Obviously, Russia has decided — that’s what I meant by the Grozny strategy — to simply bomb indiscriminately and terrorize every human being, not just focus on the fight against people," Kerry said Sunday, during an event in London with UK Foreign Secretary Boris Johnson.

Russia says its forces are in Syria as part of the fight against ISIS and Islamist terrorism. But most of Moscow's military effort is directed against the opponents of its ally: Syrian President Bashar al-Assad.

That Russian effort currently includes a furious aerial bombardment of the rebel-held part of the ancient city of Aleppo.

Grozny, on the other hand, was and is the capital of the southern Russian republic of Chechnya. It was obliterated by the Russian army during the fight against Chechen separatists in the 1990s.

“It wasn’t like it was universally, just kill everybody in the city,” says journalist David Filipov, now Moscow bureau chief for the Washington Post. “I was actually there in a situation where a Russian unit was telling its forces to cease fire so that some civilians could get out of a building.”

“But what ended up happening,” Filipov continues, “is they would go block by block ... until you had nothing but rubble. It was remarkable to see entire areas that were ... basically just street names with nothing there but rubble.”

“Basically the Russian tactic was to go, building by building, block by block, with artillery and airstrikes, and with — it seemed to everyone on the ground — relatively minimal concern for the people who were in the city who were not among the fighters.”

“The problem was that the innocents who couldn’t possibly have been part of any rebellion were the ones bearing the brunt of the bombardment. Because a few armed people would be in a neighborhood, and the planes would come and level the neighborhood.”

The Russian embassy in Washington has responded to Kerry with a tweet:

#Grozny today is a peaceful, modern, and thriving city. Ain't that a solution we're all looking for? @JohnKerry? @BorisJohnson? | #Aleppo pic.twitter.com/4VWOyVudGX

“These are two different visions,” says Filipov. “The question is, do you have to go through one to get to the other?"

But he agrees that Grozny today is entirely changed.

“I was there a couple of years ago,” he observes, “and I looked out from a building that had been rebuilt on [the site of] a building that I saw leveled. And it looked like somebody had built a model city. There’s neat squares, and there’s statues, and there are monuments and tree-lined boulevards.”

“It’s the same place I saw completely decimated,” he adds. “And it looks great.”

The government of the republic is authoritarian, but Filipov says people there often say they’re happier now that they no longer face being blown to pieces.

ISIS is not present in Aleppo, but other iihadist groups are there, fighting alongside “moderate” rebels supported by the United States.

For Aleppo, Filipov concludes, “the Russian tactic will be to eliminate any possibility that rebels could be in the air. And if that means that the city has to die, then so be it, because that’s the greater good of defeating ISIS and Islamic rebels.”