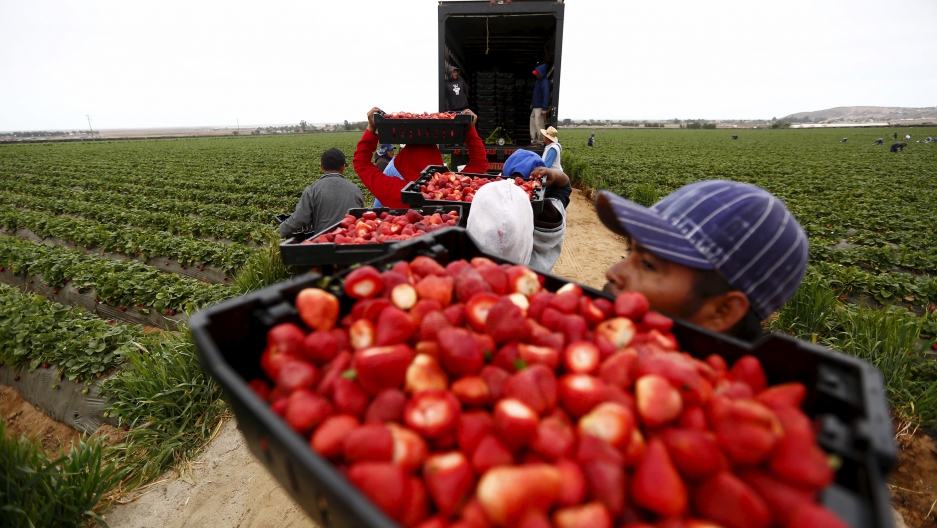 Fruit pickers hold baskets of strawberries as they line up before weighing them at a farm in San Quintín in Baja California state, Mexico on April 1, 2015. Workers there made some gains in wages and working conditions after a strike, but they say they still have significant complaints.

Some of the happiest people in America right now can be found on the new Driscoll’s berries website.

Bright smiles and dappled sunlight in a series of photos and videos make a convincing case that Driscoll’s means it when it says, “We’re serious about happiness.” This new “joy-filled approach” is the gist of an estimated multi-million dollar company rebranding unveiled in September.

The rebranding was released amidst tense labor disputes from Washington state to Baja, Mexico. In Washington, a conflict between Driscoll’s supplier Sakuma Brothers berry farm and their workers reached a climax this summer in the form of protests, consumer boycotts, work stoppages and, eventually, an historic resolution.

Driscoll’s, which supplies Costco, Target, Whole Foods and other retailers with berries, launched a new marketing campaign in September. This comment, and others like it, have been posted on their Facebook page in response to the campaign. In accordance with the page’s “Community Guidelines,” these comments are often taken down shortly after they appear.

For three years, workers at Sakuma Brothers, a 1,000-acre farm in the state’s lush Skagit Valley, fought for improvements to what they claimed were unjust labor practices.

The conflict between Sakuma and the independent farmworker union, Familias Unidas por la Justicia (FUJ), was often a bitter one, with both sides accusing the other of deceit and manipulation. But on September 12, 77 percent of Sakuma workers opted for union representation with the FUJ.

In a press release, the FUJ calls the vote “a new era for farmworker justice in Washington state.” The group is one of only a handful of farmworker-organized unions in the US and the first to emerge in many years.

The FUJ and Sakuma Brothers are now negotiating a contract that will dictate the terms by which the union will represent workers. If they are not able to reach a resolution after a series of scheduled meetings, they will bring in an outside arbitrator to decide the terms of the contract.

Sakuma Brothers CEO Danny Weeden says he is hopeful the agreement will lead to better working relations. Even so, he says his company already pays the highest wages in the region and that they are not in a financial situation to increase those wages any higher, as the FUJ has demanded.

“I’m hopeful that we can get beyond all this rhetoric and lying ... and that we can sit down and try to do something constructively for the farm and all the workers,” he says. Although the conflict has been hard on everyone involved, Weeden thinks “this will be a good thing for Sakuma Brothers and for our employees.” 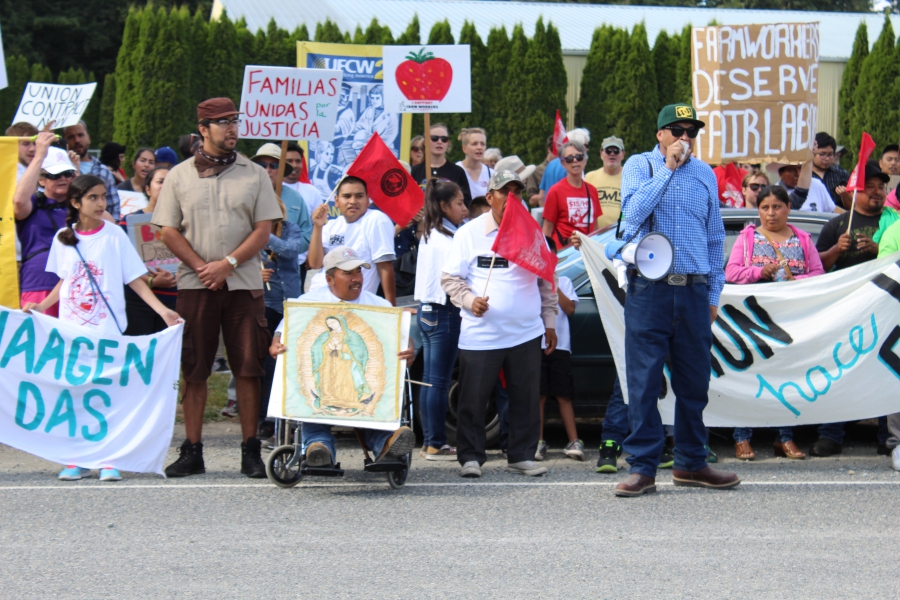 Ramon Torres, president of Familias Unidas por la Justicia, stands on the right with the bullhorn. He helped organize a worker protest at the gates of Sakuma Bros. berry farm in Washington state on Monday, July 18, 2016. Torres says he hopes the victories of these workers can help workers in other places as well.

Ramon Torres, president of the FUJ, is similarly optimistic. In an email, he credits “actions in the fields, legal actions and, of course, the consumers who supported us with their decision not to buy certain brands” with the progress that has been made.

FUJ has officially called off its boycott of Sakuma Brothers and Driscoll’s. But farmworkers south of the border have redoubled their efforts to let consumers know that, from their perspective, the Driscoll’s boycott is still very much in effect.

This photo was posted on the Social Sindicato Independiente Democrático de Jornaleros Agrícolas (SINDJA) Facebook page on September 19. It’s part of a campaign to keep the Driscoll’s boycott in the US going on behalf of farmworkers in Mexico.

The plucky music and contagious grins in Driscoll’s new campaign stand in stark contrast to a campaign launched by some of the farmworkers who pick their berries in Mexico’s San Quintín Valley. In a very different set of images being shared across social media platforms, an older man with weathered hands holds a sign that reads: “#BoycottDriscoll’s $6 a day for 12-15 hours of work is exploitation. Help us achieve a union contract. #SanQuintin.”

Gloria Gracida Martinez, spokesperson for the San Quintín-based advocacy group Alianza de Organizaciones Nacional Estatal y Municipal por la Justicia, says in an email translated from Spanish that indigenous people are recruited from the impoverished states of Oaxaca and Guerrero to work for a network of growers in San Quintín that supply berries to Driscoll’s. They are promised “good working conditions, housing and fair wages.”

“They come in search of a better life for themselves and their families, but when they arrive in San Quintín, what they find is exploitation, modern-day slavery,” she says.

In the spring of 2015, dissatisfaction with stagnant wages and conditions that Mexico’s National Commission on Human Rights equated to slavery reached a boiling point among the 30,000 farmworkers in San Quintín. A movement that started with door-to-door recruitment by indigenous organizers swelled to a 12-week strike that effectively shut down the region’s multinational agribusiness industry, costing growers an estimated $80 million.

The protests and police response quickly escalated, with reports of laborers throwing rocks, blocking roads, and burning cars and buildings. Police responded with raids and rubber bullets, resulting in dozens of injuries. With mounting pressure to quell the violence, the Mexican government ultimately helped broker an agreement and agreed to subsidize a pay raise for workers. The Los Angeles Times reported it as “the most significant achievement by a farm labor movement in recent Mexican history.”

Two unions emerged: the Sindicato Independiente Nacional Democrático de Jornaleros Agrícolas (SINDJA), which describes itself as “the first independent union for agricultural workers in Mexico,” and the Sindicato Nacional de Jornaleros Agrícolas y Similares. SINDJA alleges that the latter was created by growers and the government and that it represents their interests, not those of the workers.

Martinez, who also serves as spokesperson for SINDJA, says the improvements workers gained following the uprising were modest at best.

“There was a small increase in pay, but it was accompanied by an increased workload,” she says.

Members of the SINDJA have made a litany of complaints against BerryMex, the largest of the San Quintín berry operations and, as a Reiter family company, the one with closest ties to Driscoll’s. Like FUJ, SINDJA now wants a formal union contract with BerryMex and other growers in San Quintín to address farmworker concerns.

SINDJA says workers take home as little as $6 for a 15-hour workday and that child labor is still rampant. They say workers are subject to wage theft and are not provided health insurance despite regular exposure to harmful chemicals. Female workers report sexual harassment by field managers.

In a statement, BerryMex called these accusations “unfounded and filled with misinformation.” The company says they offer competitive wages and benefits and that they “comply with all national and international labor laws.” The Los Angeles Times reported that following the 2015 uprising, the company raised wages to $12 per day and upgraded worker housing. Driscoll’s recently announced that $200,000 in consumer sales will be returned to San Quintín to benefit worker health, education and housing.

Like BerryMex, Driscoll’s calls SINDJA’s claims “baseless allegations.” In a statement, the company emphasized its commitment to worker welfare and its “zero tolerance policy towards child labor, unsafe working conditions, sexual harassment and abuse of workers.” They say they are open to dialogue with their critics, but that their independent growers in Baja “currently have various unions in place that represent their farm workers.”

Also: Farmworkers push back against machismo and abuse in California’s wine country

But members of the SINDJA say they won’t be satisfied until they have an independent union contract. John Lear, a scholar of Mexico’s labor history at the University of Puget Sound, says SINDJA has a tough road ahead: “If agricultural unions are a hard sell in the US, they are even harder in Mexico.”

He says “state-linked unions” have been taking power over independent unions in Mexico since at least 1940, a trend that has increased since the signing of the North American Free Trade Agreement.

“Even when independent unions in the border area manage to get government recognition, they are often undermined by rival unions backed by the state or owners who are deeply vested in an economic model based on cheap labor,” he wrote in an email. “The best chances for SINDJA may be continued consumer pressure in the US and solidarity from the FUJ and other US agricultural workers.”

Back in Washington state, FUJ president Torres says his focus is on negotiating on behalf of workers at Sakuma. The FUJ will not continue calls for a boycott. But he hopes his organization’s victory is the start of a larger movement.

“We know that our victory can create support for other farmers elsewhere,” he says.

Correction: We originally gave an incorrect name of the second union formed in San Quintín in 2015.