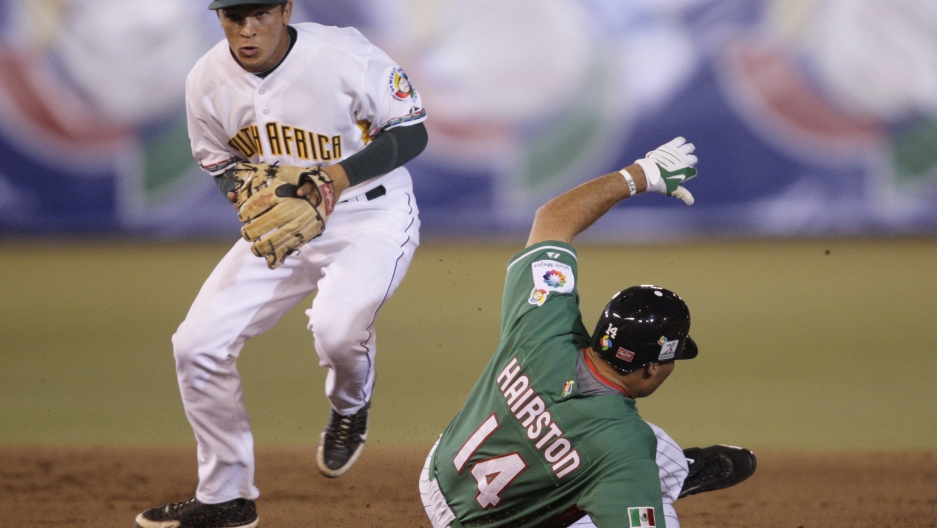 Mexico's Scott Hairston (14) is out at second base as South Africa's Anthony Phillips throws to first base during the first inning of their World Baseball Classic game in Mexico City March 9, 2009.

At a baseball diamond on the outskirts of Johannesburg, 17-year-old Koketso Manamela steps up to the plate. He looks out at the pitcher, who kicks his leg and delivers a pitch. Manamela swings his bat and, with a crack, drives the ball deep into the outfield. He sprints around the bases, which are spread across the grassy infield of a converted cricket ground.

Manamela has been playing baseball since he was 7 years old. He grew up in Alexandra, one of South Africa's largest and most notorious low-income townships. Now, he's hoping that baseball will be his ticket to a better life.

"My goal in the sport is to get signed and play abroad," he says.

Jason Holowaty, the director of market development for MLB operations in Europe, the Middle East and Africa, says that since the camp was founded in 2011, it has attracted talented players from across the continent. More recently, players have primarily come from South Africa and Uganda — the two countries with the most robust youth baseball programs.

"He has an incredible story," Holowaty says. "He grew up, literally, in the baseball clubhouse where his mother was the janitor."

Major League Baseball's quest for talent in Africa is part of the organization's larger strategy of promoting the sport and expanding its fan base. The continent, which has roughly a billion people, is seen by many as an untapped market.

Americo Juma, who coaches through the MLB "Play Ball" program in Johannesburg, says talent is increasing across the continent. And he has a message for fans in the US.

"Watch out," he says, "African players are coming."

To date, no African-born players have appeared in a major league game. They've only made it as far as the minor leagues. But that doesn't keep 17-year-old Manamela from dreaming big.

"I believe that through my hard work and determination I will make it to the MLB," he says.