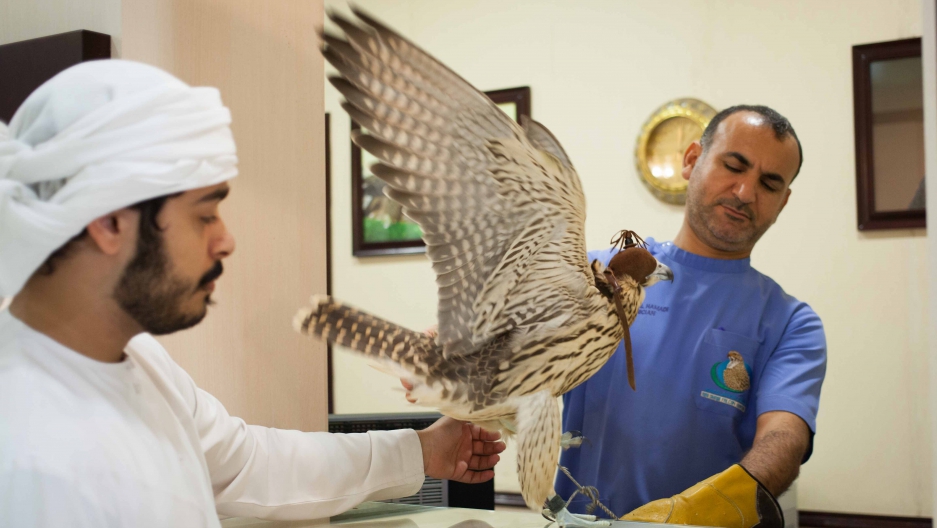 An owner picks up his falcon from the Abu Dhabi Falcon Hospital.

Images of falcons are prevalent the moment you step into the United Arab Emirates. They're everywhere — on walls, in TV ads, even on bank notes.

The falcon is UAE's national bird. And the Emiratis take falcons and falconry very seriously. So seriously, in fact, that back in 1999 the city of Abu Dhabi decided that it needed a hospital dedicated to the birds. The Abu Dhabi Falcon Hospital was born.

About 10 minutes off the main highway between Dubai and Abu Dhabi, a dusty road leads to the hospital. The reception area is packed with Emirati men in traditional white kandora and artfully-wrapped headgear. Their falcons are perched proudly on their arms. The birds are wearing tight, leather hoods that keep them them calm in a distracting environment like this one.

All owners are men. The receptionists are men. But there's a woman in charge. 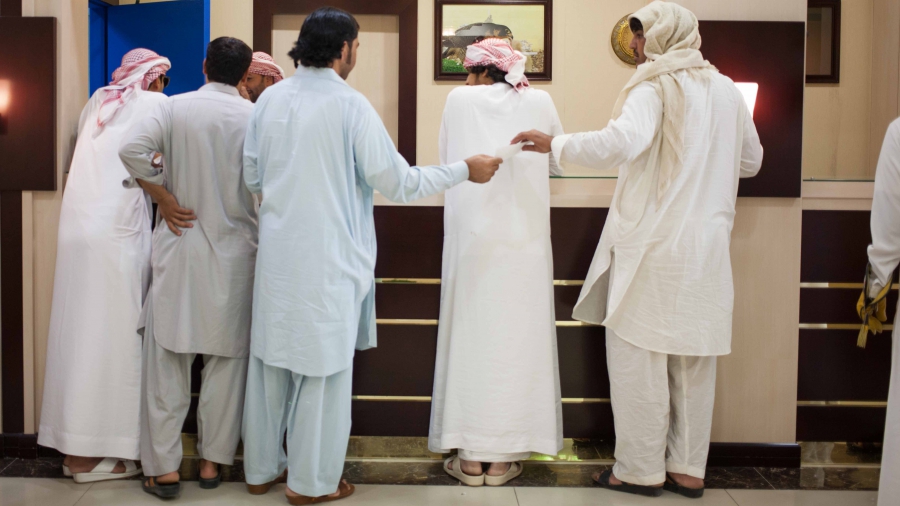 A busy reception desk at the Abu Dhabi Falcon Hospital.

In the back, I meet Dr. Margit Gabriele Muller, the director of the hospital.

- Female falcons are larger and stronger than males. They can hunt and catch prey that weighs around three to five times their own body weight.

- Wild falcons are rarely used for falconry in the UAE. There are breeding centers, but some falcons are imported from Germany, Spain, UK and the United States.

"I think I was the first who did a Ph.D in falcons in Germany," she says, with a laugh.

"[Owners] were not used to a woman as a doctor, a woman who is in charge of the hospital and, really, somebody who is taking care of their falcons," she says. Some would bring in someone else's falcon (a cousin's, for example) just to test her capabilities.

Slowly, though, Muller managed to gain their trust. "Nowadays, we have a very strong relationship, me and my falconers," she tells me. "They have elevated me to a half-man. I can't become a full man, of course, but it's a big compliment here."

Falcons have a special place in Emirati culture. Love for the bird goes back to before the UAE became a country in 1971. 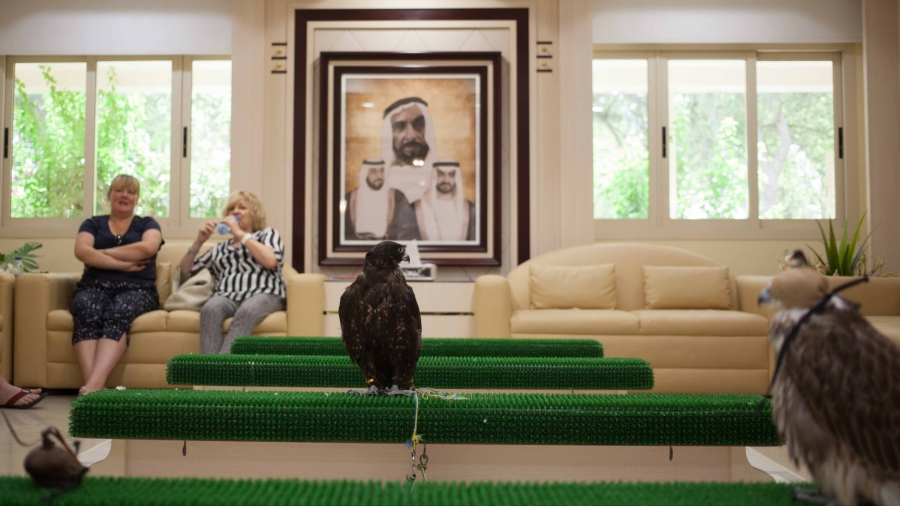 Tourists wait for a tour of the Abu Dhabi Falcon Hospital. A portrait of Sheikh Zayed (center) and his sons can be seen on the wall.

"In the old days," Muller explains, "falcons in Europe have always been a sport of the kings, of the aristocracy. But here in Abu Dhabi, and in the Middle East, falconry has always been a necessity for the Bedouins to survive in the desert."

Abu Dhabi is located on a main migration route for falcons. During the fall season, the Bedouins captured the birds and use them to hunt for meat during the winter. They'd be released back into the wild in spring. Falcons meant survival. That's why, Muller says, falconry has never been considered just a sport in the region — it has always been much more.

Even Sheikh Zayed bin Sultan Al Nahyan, the founder of the UAE and its first president, was an avid falconer. He was so passionate about falcons that he wrote a poem about them.

The love for falcons in the UAE continues to this day.

"The falcon has been integrated in the Bedouin’s family like a child, like a son or daughter," explains Muller. "They live with them in the living room, some sleep in the same bedroom. Like the owners, they have the same place in the car, so the falcon is a different kind of lifestyle here."

Muller takes me to a room where about a dozen falcons wait for treatment. One is lying motionless on a table, an oxygen mask covering her tiny head. She's under anesthesia and is about to undergo a routine procedure, or as Dr. Muhammed Nazir calls it, a manicure and pedicure. 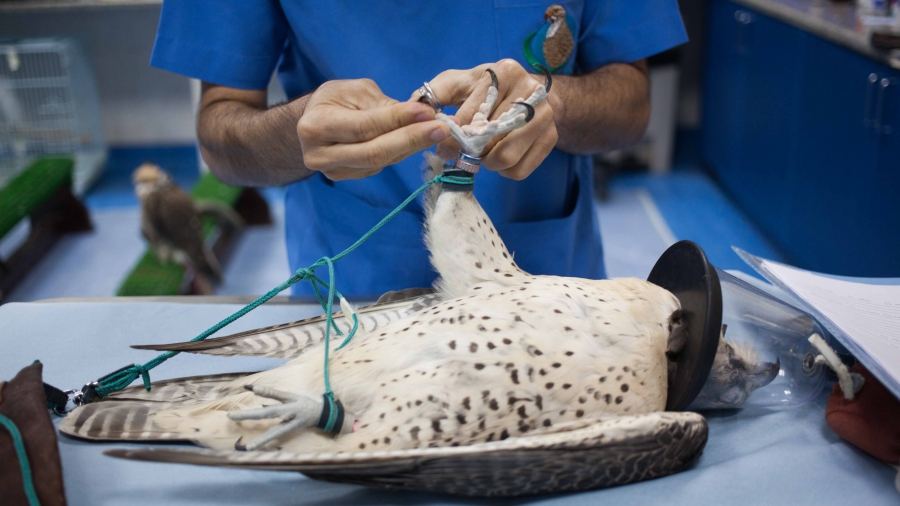 A falcon gets its talons in shape at the Abu Dhabi Falcon Hospital.

Once Nazir is done with the talons, he does the same for the beaks. This procedure is done twice or three times a year, depending on how fast the nails and beaks grow. 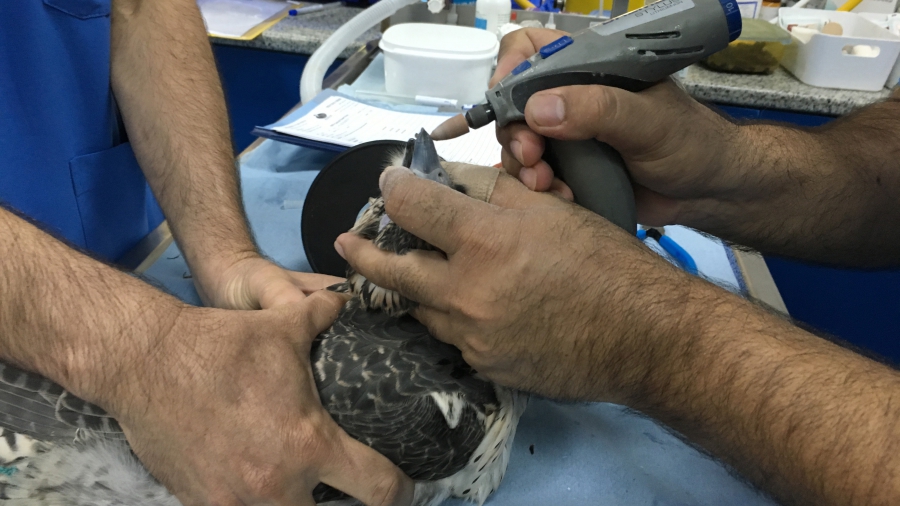 A falcon gets its beak in shape at the Abu Dhabi Falcon Hospital.

Another bird gets a GPS chip inserted in its chest. This is to help the owner keep track of its whereabouts. Falcons can cost hundreds of thousands of dollars and owners are advised to have the GPS chips inserted so they can keep track of their birds.

There are times, of course, that Muller and her team have to deal with much more complicated procedures, like when a falcon is hit by a car. 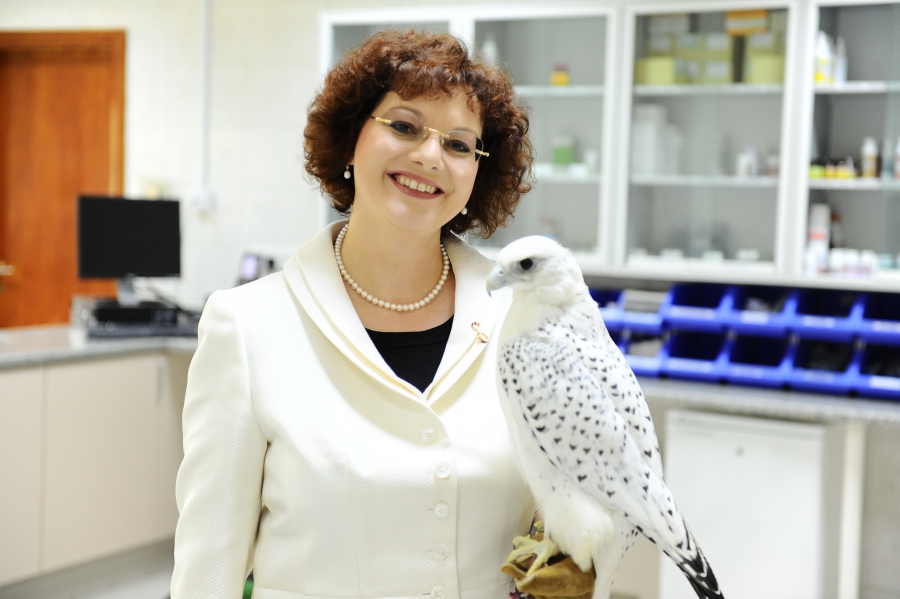 "When the falcon came to us it was already lying down in shock," Muller recalls. "It looked horrible. On the head, you just had the rubber of the car tire and all the skin, everything was gone. And all my team said, when they saw her, 'it's finished. This falcon can never survive.' And I looked at the falcon and she looked into my eyes. It was incredible. The falcon was lying on the floor, she lifted her head up and she said 'try please. Don't let me die.'"

And try Muller did. A couple of surgeries and a couple of days of intensive care and the falcon survived. Muller says she reconstructed parts of its head, even giving it new ears. The bird is alive today and the owner brings her to the hospital for regular checkups.

"She gave me a lot of gray hair, this falcon," Muller says with a chuckle. 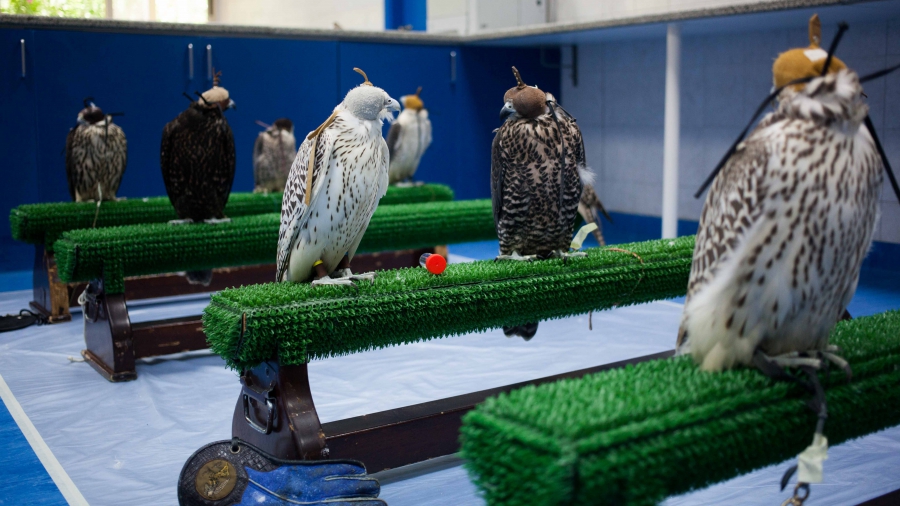 Falcons await treatment at the Abu Dhabi Falcon Hospital. Their eyes are covered to keep them calm.

The pressure hasn't stopped Muller from doing what she loves. She says the goal of the hospital is to help protect a tradition as well as the species.

"The United Arab Emirates [is] a very young country," she points out. "The Bedouins have been thrown from a very basic, desert lifestyle into a very modern, high-tech life in such a short time. So it means it is essential for them to preserve their heritage, their tradition. If they do not have their roots, and falconry is one of the big, big connections to their past, they will lose their own identity."

In the past couple of years, Muller and her team have discovered two new diseases in falcons. They have also setup a rehabilitation center as well as educational programs for kids. There's also a falcon release program where wild falcons are cared for and released back into the wild.

And they've done all that while making sure the birds go out into the world sporting perfectly-manicured nails.