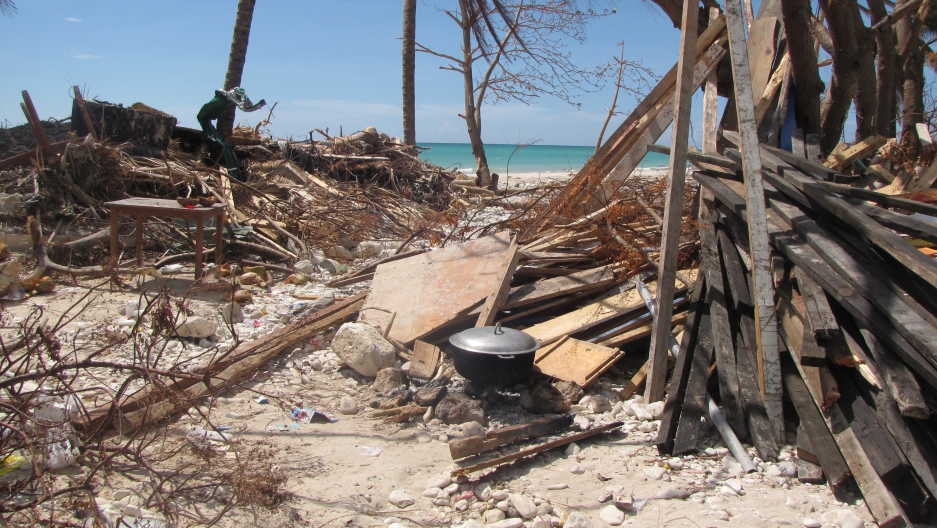 A cauldron of fish soup is lunch for laborers clearing the land where the Hotel Reposoir du Village once stood. The kitchen was destroyed along with much of the hotel.

If you Google images of Port Salut, Haiti, you’ll see a Caribbean paradise — white sand beaches, coconut trees and inviting turquoise sea. The Hotel Reposoir du Village had a bar on the beach and tables under thatch umbrellas. When I stayed there two years ago, the only problem was an almond tree noisily dropping its fruit on my room’s tin roof.

Today, it’s silent. There’s no more roof, and the almond tree has lost it branches. The bar and restaurant are now just a mess of downed trees and rubble.

Only a cement hut office is still standing. It’s where I find Chello Lame, clearing debris. 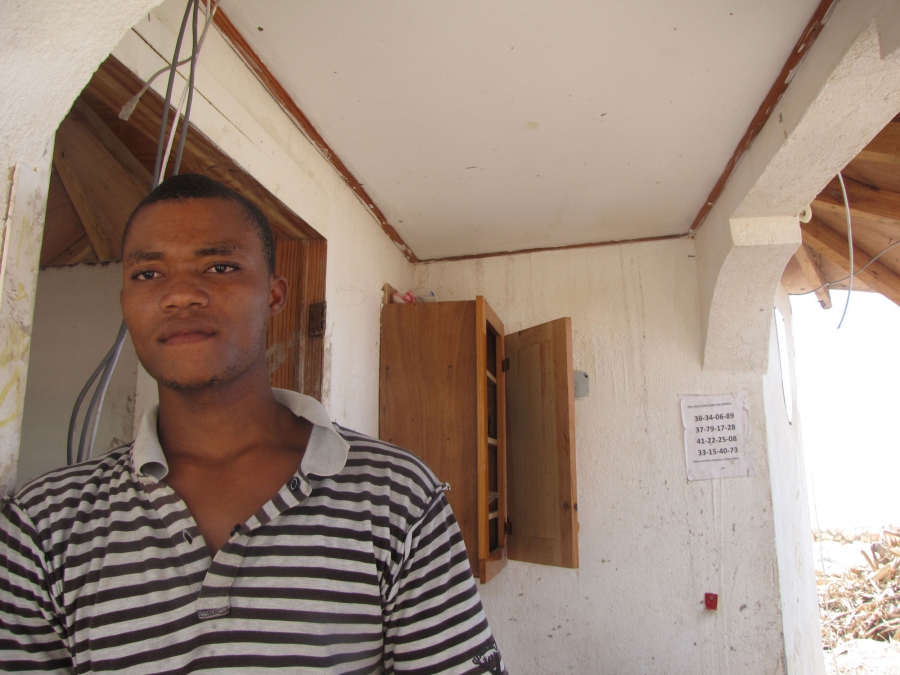 Chello Lame lost his home and now sleeps in a room at a neighbor's house with 11 others.

He was at home when Hurricane Matthew hit. A panel from his tin roof fell on his head. It didn’t injure him, but he fled, with one of his children under his arm, and eventually made it to a cement-roofed house to shelter in for the rest of the storm.

“Thank God my children weren’t hurt,” he says. But a young relative of his, his cousin’s baby girl Anaika, was hit in the head by flying tin. She died before reaching the hospital.

Now Lame and 11 others are sleeping in one room together, the same place he had fled to in the storm. 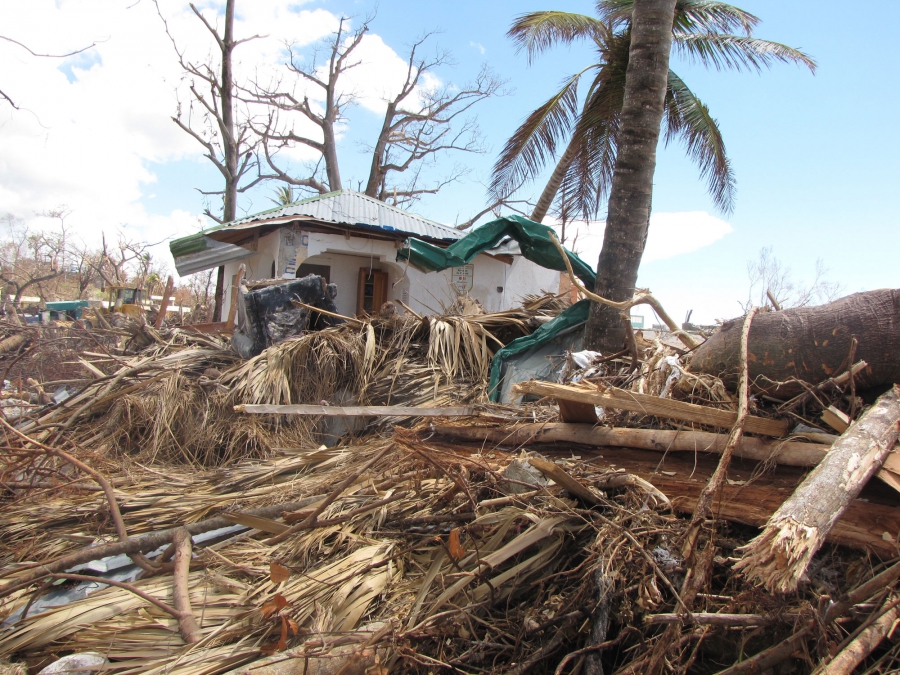 An administrative office is one of the few remnants of the Hotel Reposoir du Village in Port Salut, Haiti.

Outside the hotel hut, a cauldron of fish soup simmers over a charcoal fire. Lame lost his full-time job as a cook, but now he’s earning a bit of money making meals for the workers hired to clear the land. He says he and other former workers around here are focused on finding jobs to support their children. As for rebuilding, “That won’t be easy,” he says. “It will take a long time and will require a lot of money, a lot of aid, a lot of thinking through and a lot of patience.”

I ask Lame and the laborers he’s cooking for if they know that a distribution is going on in town right now. The aid group, Samaritan’s Purse, is giving out blankets, plastic sheeting for roofs, rain collection buckets and soap.

They say they heard about it, but couldn’t go because they have to work. And besides, they tell me, there’s never enough, and the police get aggressive with the crowds.

Later, at the distribution site, I ask a group of women carrying away supplies, if the aid was what they had needed.

Their reply is a waterfall of words, yelling that they’re hungry, their houses are gone and that, since the hurricane, no one has come to see their neighborhood, Scipion.

So we follow their directions, driving across town to where a river crosses the road. We leave the car and cross on foot. The knee-high water is clear sapphire and looks delicious under this relentless, dehydrating sun.

Locals say they’ve been told the river might be contaminated after Matthew, but they don’t have other options for drinking water. 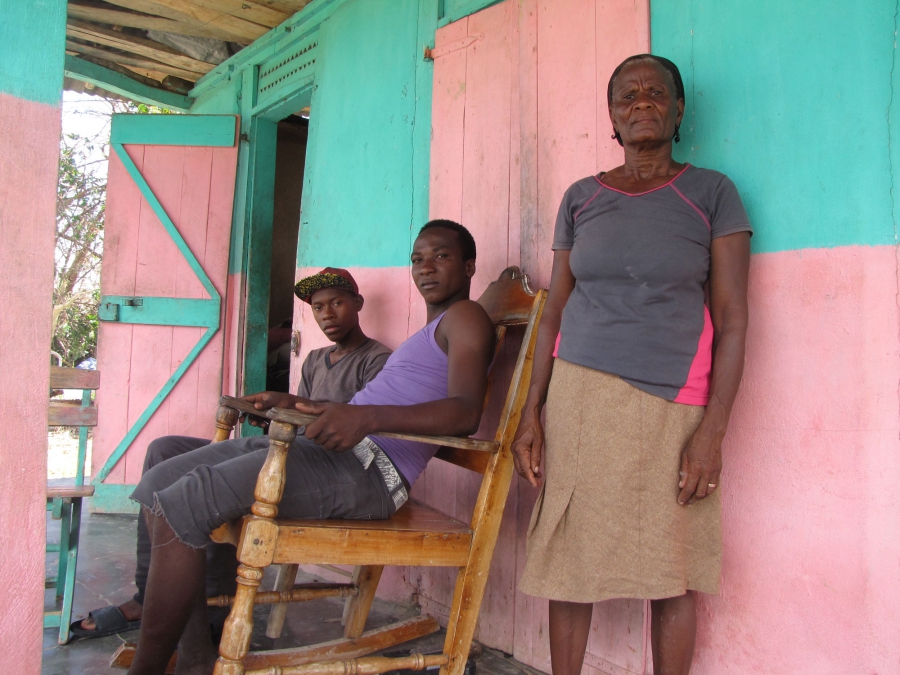 At what’s left of the first house in Scipion, we speak with Anderson Darius. “If cholera comes here, as it’s come to other places,” Darius says, “a lot of people will die here because we don’t have clean drinking water.”

There has already been an uptick in cholera cases in other parts of southwest Haiti. And Darius says the local pump is damaged, and the price in town of small amounts of water has gone up in the last week.

“Imagine that for the moment you have a bit of money reserved and a little plantain tree,” Darius says. “The tree fell [in the storm], and you cut it. You can survive for two or three weeks. But after 15 or 22 days, you won’t have anything left. So aid would help us a lot.” He goes on, “People eat, but you don’t eat to fill your stomach, you eat just enough to keep going. I wish for help to come as quickly as possible because if you wait 15 or 22 days, people might not survive.”

Six people were in this house during the storm when the roof blew off. Like Lame, they all fled to a cement-roofed house and are still sleeping there every night. 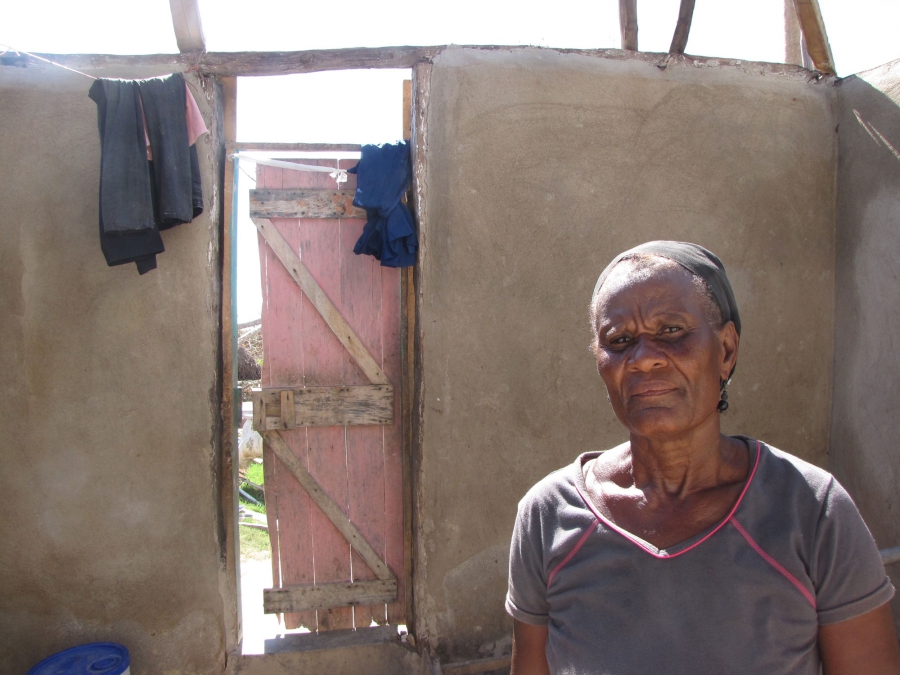 Enite Saint-Jour is pictured here in her now roofless bedroom.

One of them is an elderly woman named Enite Saint-Jour. I ask her what went through her head when the storm was over.

She slaps her hands against each other in a sign of resignation, and says, at first in a whisper, then loudly, “I don’t have anything. ... I have no house, I don’t have any house. I don’t have any garden at all. All my animals died. Goats, sheep, pigs — all died.”

Some of the women I first met on the road are waiting for us out front. Soon they are taking me by the arm, pulling me in one direction or another to see destroyed house after destroyed house.

Most homes along the road are completely uninhabitable. Gesta Cady’s home, for example, is mostly rubble. When we visit, she presses herself against one of the remaining inside walls, and says, “I was standing here with the children, like this. The wind was blowing, and then the whole roof flew away, as we were standing here. I kept calling out for the children, and they’d say, ‘We’re here!’ I was convinced they would die. And I knew I would die here, too.”

But they made it safely to the neighbor’s house — the one house around with a cement roof. And along with most of the displaced along the road, they still sleep there every night.

At least several hundred Haitians died in the storm, a number of them in Port Salut. I ask Cady if any of the deaths were here, in Scipion. 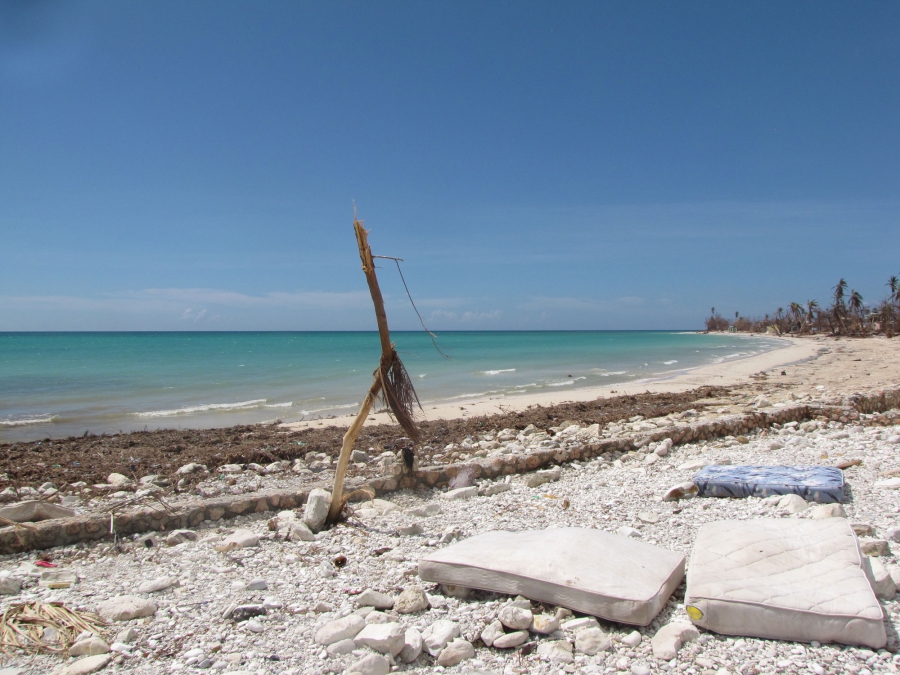 This is a beach in Port Salut, Haiti, where the Hotel Reposoir du Village stood before Hurricane Matthew.