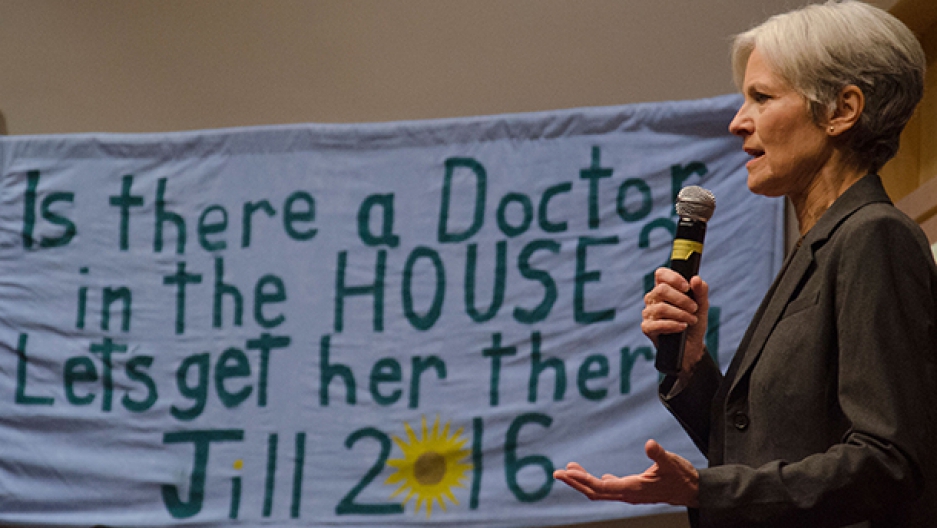 In a wide-ranging interview with Living on Earth’s Steve Curwood, Dr. Jill Stein, the 2016 Green Party nominee for president of the United States, discusses her “Green New Deal” to avert a climate emergency, why she participated in the Dakota Access Pipeline protests and her plans to scale back military spending.

CURWOOD: What are the Green Party’s core values, and why was it created?

We are the one political party that does not take money from lobbying interests or from corporate interests, and we do not have a SuperPAC. So you could say that we are the one campaign that actually has the liberty to stand up for what the American people are clamoring for. In a nutshell, we call for an emergency jobs program to solve the emergency of climate change and to bring them together in a Green New Deal, like the New Deal that got us out of the Great Depression.

CURWOOD: How many jobs would the Green New Deal create, how long would it take, why is this plan an emergency, and how do you plan to accomplish all of this?

STEIN: We plan to accomplish all of this because we must accomplish all this. The Green New Deal declares that climate emergency is very real. Every month now is setting a new record for the month of that name in terms of heat, record storms, fires up and down the West Coast, flooding in the Southeast. Sea-level rise predictions from [retired NASA climate scientist] James Hansen — who hasn't been wrong yet — say that we can expect 10 feet or more of sea level rise as soon as 2060. That’s the date he put it at. So it is an emergency, and we must solve it.

When Pearl Harbor was bombed at the outset of the second World War, it took us only six months to transform our economy to a wartime footing, because we recognized a national emergency. Right now we have a global emergency that makes Pearl Harbor look like small potatoes, because we're not talking about one harbor, we're talking about all harbors and all the coastal population centers we will lose in a catastrophic hit to civilization that will be very hard to survive. So we’re talking not centuries away, we're talking, in all likelihood, this century and potentially within decades. So it is time to mobilize.

We call for eliminating fossil fuels by 2030, which is what the science says we must do if we are to hold temperature rise to less than 1.5 degrees centigrade. If we do that, we'd get so much healthier, in fact, that we'd save enough money to pay the costs of the Green New Deal within a decade or so. So this is a win-win. The other win, I might add, is that it makes the wars for oil obsolete, which also allows us to put our dollars into true security here at home.

CURWOOD: What motivated you to join the Dakota Access Pipeline demonstrations a few months ago?

STEIN: I went there because the battle that's being fought there is a symbol. It is a microcosm of the global battles that are being fought. This is a fight for human rights, for the rights of the indigenous people to protect their sacred sites and their historic grave sites, which were viciously attacked by the Dakota Access Pipeline company in the middle of the night on a weekend, in the most underhanded and nefarious kind of way. It was really outrageous. And then, as the indigenous people stood up the next day to say, 'This is an outrage,' they were attacked with vicious attack dogs and pepper spray, simply for asserting their democratic rights, their civil rights, our First Amendment rights to protest for redress of grievances. Not long afterwards, the president chimed in to say, 'Yes, we should stop this,' and then the courts chimed in to say, 'Yes, in fact, this permit is illegitimate, because the native people are supposed to give informed consent. They have not been informed, and they did not consent.'

CURWOOD: The Black Lives Matter movement and certain environmental campaigns have given each other mutual support. How are the goals of averting a climate disaster and institutionalized racism related?

STEIN: I got my start fighting environmental racism in Massachusetts, working to close down the polluting medical waste incinerators in Lawrence and Lowell — a whole cluster of incinerators in one of the poorest and black and brown communities in New England. Who is more on the firing line of climate justice than the communities of color in this country and around the world? The white community is not aware of the incredible price that's been paid by the African American community. So we call for a real discussion on race.

CURWOOD: Why do you want to cut at least half of all military spending?

STEIN: Number one, it's not making us safer. About half of your income tax is going to the military, and military spending is more than half of our discretionary budget. We call for a new kind of offensive in the Middle East, a peace offensive which begins with a weapons embargo, since we are supplying the majority of weapons that actually get into the hands of all parties, all combatants in the Middle East. We can get this started and work to bring along the Russians and the Chinese. The Russians, in particular, are also struggling with the consequences of terrorism, the failed nature of these wars and with climate change. Russia has endured several droughts and reductions in their grain supply and so on, and they are massively impacted by their fossil fuels and pollution.

So, we would like to lead the way in redirecting our massive dollars from competing for fossil fuels to instead phasing out fossil fuels and to encourage the Russians and the Chinese, because they, too, are bearing the burden here. Why don't we all just put those dollars into making fossil fuels obsolete and making the wars and the competition obsolete as well?

CURWOOD: How do you respond when people say, 'Oh, the Green Party is great, but Stein can't get elected, and what's worse, it could be a spoiler situation?'

STEIN: Here’s an obvious solution: We can enact ranked-choice voting right now and eliminate any splitting of the vote, any spoiling of the vote. Let me be clear: I will feel horrible if Donald Trump gets elected, and I will feel horrible if Hillary Clinton gets elected. I think that banning Muslims from the country is not worse than bombing Muslims, which Hillary Clinton has been very busy doing. I think that Donald Trump doesn't tell us what he's going to do in Syria — one can only imagine — but with Hillary Clinton, we don't have to imagine, because she wants to start an air war with Russia, a nuclear-armed power, over Syria. So we're not going to get out of here alive with Hillary Clinton in the presidency, if she gets her way. And, by the way, she's likely to have a much more compliant Congress than Donald Trump would have.

This race, it's not like Bush–Nader-Gore, because the public has rejected the [current] candidates. They're the most disliked and distrusted ever in our history. Even the majority of Donald's supporters don't support him, they just can't accept Hillary, and the majority of Hillary supporters don't actually support her, they’re actually viciously against Donald Trump. What's wrong with this picture? Democracy is not a question of who we hate and fear the most. It needs an affirmative direction. It needs a moral compass. If we don't provide that moral compass, we have a moral vacuum and it is the predatory political parties, funded by the big banks, the fossil fuel giants and the war profiteers, who will continue to rule the day.

We need to put our feet down. In the words of Alice Walker, 'The biggest way people give up power is by not knowing we have it to start with.' We have it, and it’s time to use it, because to fail to use it now means we continue down this road. When is it going to get better, exactly? When are we going to have an election in which we can risk standing up, if we can't do it now? Because the Democrats and Republicans are marching further to the right in each election.

This interview originally aired on PRI’s Living on Earth with Steve Curwood. It has been condensed and lightly edited for clarity.