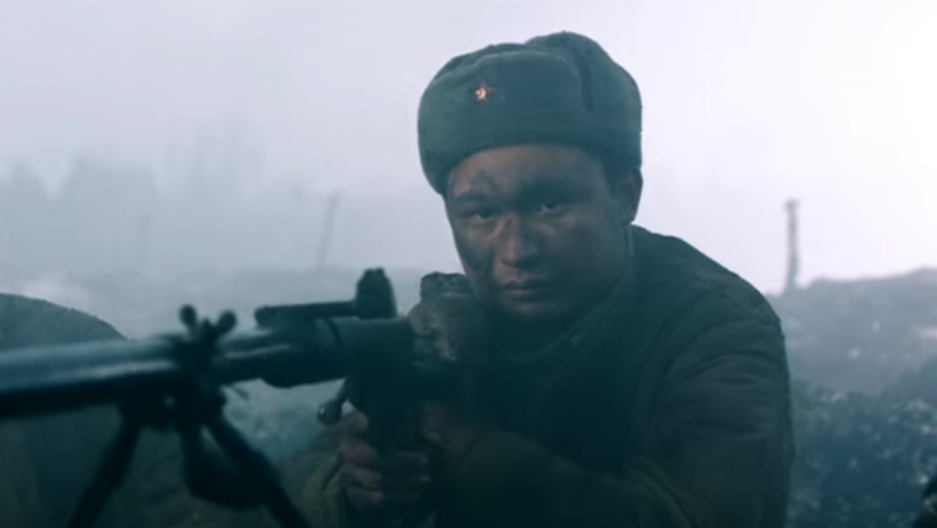 A screen grab from the movie

A massive blockbuster looks set to take Russia by storm. It’s the story of one of the best-known and most iconic episodes of World War II (for the Soviets): The sacrifice made by “Panfilov’s 28 Men" to save Moscow from the Germans.

There is just one small problem.

This is a tale known to pretty much everyone who grew up in the old Soviet Union. Twenty-eight men, armed only with light weapons, heroically stopped a massed German tank attack on the very outskirts of Moscow in the darkest days of the war, on Nov. 16, 1941. It was a time when the Nazis seemed unstoppable. All the men died. It was a sacrifice comparable to Leonidas and his 300 Spartans, the story goes. There was no surrender.

All 28 men were posthumously made Heroes of the Soviet Union — that’s something like getting the Congressional Medal of Honor. Streets have been named for them. Giant statues stand in their honor. A quote from their commander became one of the mantras of the war effort: "Russia is vast but there is nowhere to retreat. It's Moscow behind us."

Their sacrifice is probably as iconic for Russians as the image of the Marines raising the flag on Iwo Jima is for Americans.

The men are real, but their story still isn't.

Though there are elements of truth. Their unit — the 316th Rifle Division, led by Gen. Ivan Panfilov — did fight the Germans to a standstill on the day in question. A Soviet division had about 10,000 men, and anyone who took part in that battle probably deserves the name hero. Panfilov himself was killed two days later, but the division was nicknamed “Panfilov’s Men” throughout the war.

However, according to an official Soviet military investigation in 1948, the details about the 28 men were entirely a work of fiction.

The Soviet military prosecutor set up a historical commission to investigate the incident after one of the famous soldiers turned up alive.

The man in question was Ivan Dobrobabin. He had been captured by the Germans, or surrendered. He survived the horrors of Nazi captivity, and escaped, joined a pro-Nazi police force in Ukraine, then deserted and re-enlisted in the Red Army. He fell afoul of the authorities in 1947.

Being a prisoner of war was not an option for Soviet soldiers. Stalin ordered everyone to fight to the death rather than surrender. What’s rarely heard in Russia is the fact that millions of young Soviet soldiers were captured in the first two years of the war — thanks in part to Stalin’s own incompetence as a military commander. Thousands of liberated POWs were executed by their own country after the war.

Dobrobabin was lucky and was simply carted off to a gulag in Siberia. He was eventually released and lived until 1996.

The official probe, led by military judge Lieutenant-General Nikolai Afanasyev, reported that five more of “the 28” did, in fact, survive. Another of them was found to have been killed two days before the great battle of November 16. In his final report to Stalin himself, Afanasyev said that the last stand of the Panfilov 28 "did not occur. It was a pure fantasy."

The 1948 investigation concluded that the details of what happened that day were all invented by reporter Vasiliy Koroteev and other "journalists" with the Red Army's "Red Star" newspaper. Koroteev visited the unit a few weeks after the event, collected the names of 28 dead or missing soldiers, and filled in the blanks himself — the quotes, the details of who did what, and so on, and propelled them to hero status. He and his editors later defended their actions by saying the Soviet Union needed heroes.

Stalin needed the myth. He was pushing a “no surrender, no retreat” policy. He needed examples of sacrifices that appeared to make a difference. Many Soviet conscripts had no love for Stalin or communist oppression, and he was uncertain if they would fight. Many came from persecuted religious and ethnic minorities. Having Kazakh and Kyrgyz men fighting so heroically fit the propaganda needed to show the country coming together.

So the findings of the investigation in 1948 remained classified, and the legend of “The 28” was allowed to continue.

The documents were briefly released in the 1990s but did not attract publicity. It was only in 2015, when the movie was already in production, that the facts of the incident came back into public attention.

Russia's chief state archivist, Sergei Mironenko, published the documents online last year as buzz about the movie was starting. He felt that all 10,000 men of Panfilov’s division deserved recognition, not just the mythical 28.

That created a social media firestorm. Mironenko lost his job in early 2016.

Now, every nation’s movie industry plays fast and loose with history. “The Patriot” and “Braveheart” irk many with historical knowledge. But at least in the West, Hollywood does not monopolize history. If you’re curious about a historical episode, you can find more accurate sources of information. But in Vladimir Putin's Russia this is becoming increasingly difficult.

It’s apparent Putin prefers myth to history. Mironenko’s case is not isolated. College professors who deviate from the official line are losing their jobs as well. A blogger who noted how the Soviet Union cooperated with Nazi Germany to conquer Poland in 1939 was fined. Widely respected foreign scholars of the eastern front in World War II, like Anthony Beevor and John Keegan, find their books banned in Russia.

Supporters of Putin’s efforts to control how history is told argue that Russia is simply too big to have competing narratives. Putin wants to project a Russian-speaking world that rallies together in the face of foreign threats.

History is much more complex and interesting than that.

Sergei Medinsky, Russia’s culture minister, defended the movie, saying that "even if this story was invented from start to finish, if there had been no Panfilov, if there had been nothing, this is a sacred legend that shouldn't be interfered with. People that do that are filthy scum."

"Panfilov’s 28 men" is also a big deal in the former Soviet republics of Kazakhstan and Kyrgyzstan, since most of the men in this unit were from the central Asian nations.

Last week, Putin went to the Kazakh capital, Almaty, and sat down with his Kazakh counterpart, Nursultan Nazabayev, to enjoy a preview of the movie. Both governments helped fund it, after a crowd-sourcing effort showed there was huge public interest.

History shows that despite Stalin’s fears about their loyalty, Russians and other "Soviet" peoples were indeed prepared to fight and die to stop the Nazi invasion. They were hampered by Stalin’s strategic and tactical ineptitude, and by tyrannical discipline.

They did fight to defend the motherland, despite Stalin. There were millions of real heroes. The Soviet Union lost an estimated 20 million people in the war, compared to about 400,000 Americans. So in some sense the movie is a tribute to them.

Just don’t get caught up in the facts.