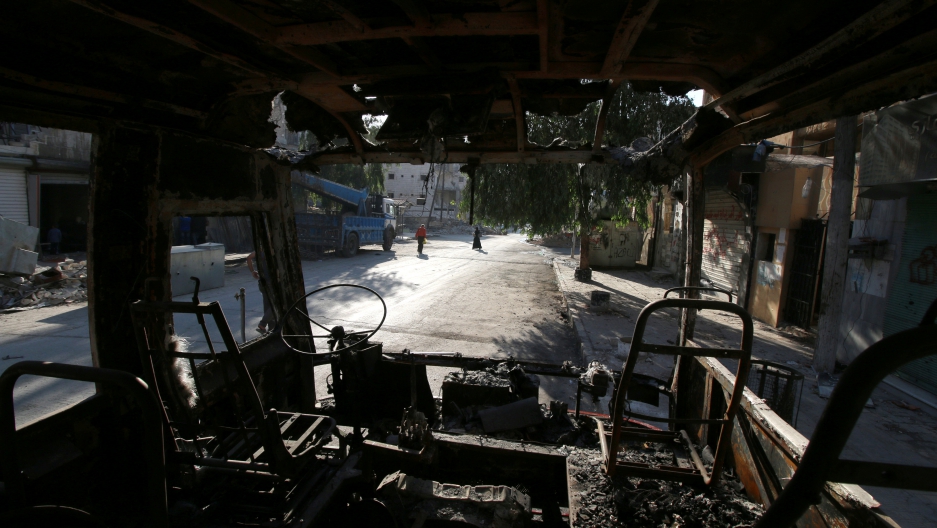 Vehicles on the streets of rebel-held eastern Aleppo do their best to avoid detection at night. These days that often means switching off car lights and traveling slowly through rubble in the dark.

That's according to Dr. Farida, the only female obstetrician in this part of Aleppo.

Reached via Skype in the besieged city, Dr. Farida says she usually walks to work because gasoline is in short supply. But Thursday evening the hospital sent a car for her.

"The warplanes were bombing in the streets, so the driver told me we have to go without any lights," she said. "No cars in Aleppo can put the lights on because when the airplane sees any moving lights, he will bomb them, or [call in a strike] with heavy artillery."

The Syrian physician uses only a first name for security reasons. Her husband is also a doctor at the same hospital. Now that the Syrian regime has targeted medical facilities, the couple has found themselves working in one of the most dangerous places in the city. Still, they take their 7-year-old daughter to work with them almost every day.

"I feel alone. My family has all gone out. My mother, my dad, my brothers all are out [of the city]," she said. "Aleppo was a city that would not sleep, the people were always in the street, going to market, going to swim, going to everything. Now it's a ghost city."

The battle for Aleppo began in July 2012, and there's been no letup. An estimated 150 people have died there this week alone. Dr. Farida says only one other family remains in the apartment building where she lives. She says it may be a good thing that many residents have fled because the warplanes have fewer targets. A barrel bomb that used to take 40 lives now might only manage to maim a dozen.

Her hospital is running short on supplies and staff have had to improvise. In recent weeks the doctor has started to use sewing thread from her home to suture patients after cesarean sections. Mothers who give birth are hurried out of the facility as quickly as possible, even those who've had surgery.

"Her colleagues say that she's equal to 1,000 men," he says. "And when you hear that in Aleppo, from this conservative society speaking about women, that speaks volumes about her strength and the leadership."