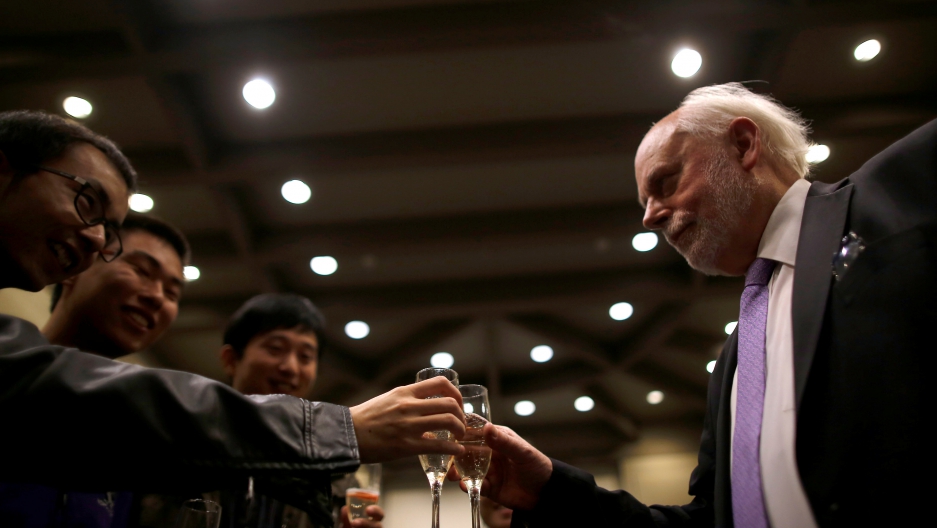 J. Fraser Stoddart, one of the winners of 2016 Nobel Prize for Chemistry, is congratulated by students after a news conference at Northwestern University in Illinois. He is one of six laureates in the sciences awarded in the US this year. All came to the US as immigrants.

Princeton economist Atif Mian only tweets a few times a month, and most if it is the kind of dry policy stuff you'd expect from a man whose area of specialization is finance and debt, mixed with the occasional foray into politics.

It's smart, but not necessarily viral material.

He hit Twitter gold this week, though, when he made a simple observation about the recent Nobel Laureates that resonated far and wide: Six people living in the US have won the prize in the sciences this year, and all six are immigrants.

Six Americans won the Nobel prize this year in various sciences. ALL of them immigrants.

"The political environment being what it is, I thought this was an interesting point to get across. America has benefited in the past from its open polices and it would be a mistake to reverse that," he said.

The Hill has a good roundup of all six winners. The prize in physics was awarded to three immigrants from the UK: David Thouless of Yale University, Michael Kosterlitz of Brown University, and Duncan Haldane of Princeton University. The prize for economics went to Oliver Hart of Harvard University, British, and Bengt Holmström of the Massachusetts Institute of Technology, originally from Finland.

Many of these six laureates have become US citizens, but PRI wasn't able to reach all six to independently verify their immigration status. For Mian, the important thing to note is that they all do their research in the US, and that they teach and train students here.

The sixth prize to someone in the US went to Sir J. Fraser Stoddart of Northwestern University, one of three laureates in chemistry. He's originally from Scotland but has been a US citizen since 2011. He came to the US in 1997, drawn both by the research environment at the University of California Berkeley and the chance for more advanced medical care for his late wife, who at the time was battling breast cancer.

For Stoddart, the chance to work with a broad range of people is part of what makes the US an ideal place for scientific research.

"I'm all for movement of all of the people in the system ... open doors, open policy. If you have this, it's total magic in the academic world," he says. "The days of it being done in countries on their own is over. It's finished."

Stoddart says in the 17 years he has worked in US, first at Berkeley and since 2008 at Northwestern, his research groups have contained people from dozens of countries. Of late, many are from China.

"You just have to move with the flow in terms of where is the talent, where is it coming from," he explains. "That changes through a professor's career. It's more likely I will attract people from foreign countries than an assistant professor who is just starting out."

His view that scientific progress depends on the open exchange of information and the ability of researchers to easily cross borders is, of course, not new or unique. The American Chemical Society has a policy position on its site advocating for a more transparent and flexible visa system to promote research. The tech industry, led by Facebook, Amazon and Apple, has taken a similar stance for tech workers.

Stoddart fears the openness science depends upon is under threat around the world, and he points to his home country as Exhibit A. The United Kingdom's decision to leave the European Union could, he says, dramatically reduce the talent pool that researchers have at their disposal. Now, he notes that UK-based research institutions can draw on all of Europe, and its 745 million people. With Brexit, however, that may change.

"If the worst comes to pass, overnight, they will be shut down. ... The situation is just going to catastrophic," Stoddart says.

Follow: We're keeping up with Sir J. Fraser Stoddart as he works through the Trump years.

He remains optimistic that the US will not crack down on immigration. And the appeal of Donald Trump's "Build a Wall" rhetoric has left him puzzled. 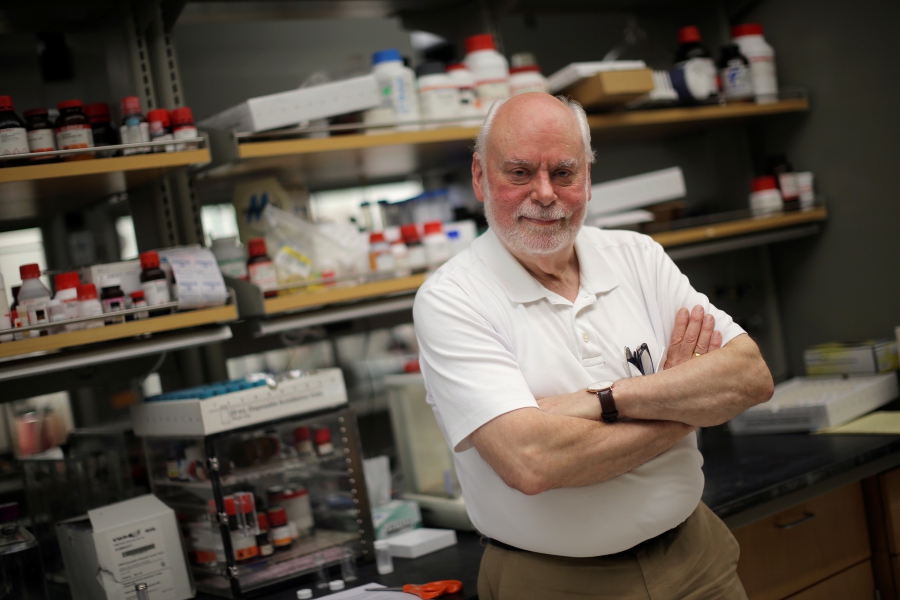 "I just can't believe it. I don't see how it makes any sense," he says. "Surely the US has benefited from people on the other side of that ‘wall' coming here for centuries. Why would you want to stop it? It doesn't make any sense. It just leaves me speechless, totally speechless."

Like Stoddart, Mian is also a naturalized US citizen, having migrated to the US from in 1993 to pursue his college education. His perspective has also been shaped by the situation in his home country.

Mian is part of a minority religious community, the Ahmadiyya, who face discrimination, persecution and sometimes violent assaults in Pakistan. In 2010, 86 people were killed when two Ahmadi mosques were attacked in Lahore. A US commission on religious freedom raised concerns about anti-Ahmadiyya laws and violence against followers of that faith in its 2016 report (PDF).

Mian sees the "pluralistic mindset" of the US as fundamental to its success, and now fears that is being challenged.

"Those of us who come from the outside, who come to the US precisely because of what the US has to offer, can see that contrast," he says. "You have something going that is really good, so don't screw it up."