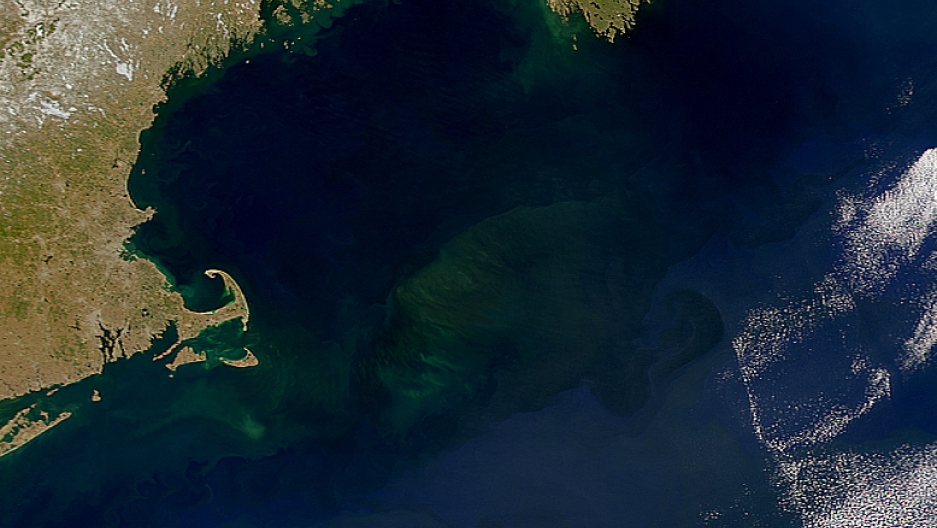 A visible color satellite image centered on Georges Bank in the northwest Atlantic Ocean. The Georges Bank is part of the new monument.

President Barack Obama has created the Atlantic Ocean's first national marine monument. The new Northeast Canyons and Seamounts monument, which lies 130 miles off Cape Cod, has the same status as a national park — so it’s perhaps fitting that within its nearly 5,000 square miles of ocean are canyons deeper than the Grand Canyon, four large underwater mountains and rich swaths of biodiversity.

For the majority of us who will never get the chance to explore this new marine monument, New England Aquarium senior scientist Scott Kraus describes it as the “Serengeti of the seas.”

“The monument’s area is the edge of the continental shelf of the United States,” Kraus says. “So the water drops from the top of Georges Bank. It's perhaps 300, 400 meters deep, and all of a sudden, it drops off to four miles deep, and in that steep drop-off there are underwater canyons created tens of thousands, hundreds of [thousands of] years ago.”

Kraus adds that because Georges Bank juts out into the Atlantic, it catches deepwater currents coming from the Gulf Stream and elsewhere, bringing with them nutrients from the ocean floor. The result, he says, is a staggering array of marine life.

But within Kraus’ image of abundance are glimpses of a distinctly fragile world. He hopes that the new monument will protect organisms like deep-sea corals from damage by trawlers and traps. Some of the canyon corals, he says, are “beyond imagining” — and incredibly slow-growing.

“For example, there's a coral called bubblegum coral, and it looks like somebody just kept sticking bubblegum together until you had a very large coral piece,” Kraus says. “These things grow 8 to 10 feet tall, and they live over 1,000 years. It's like an underwater Joshua Tree. These animals live for an extremely long time, but therefore they're quite fragile.”

Kraus adds that the new monument prohibits all commercial fishing in its waters, phasing out red crab and lobster fishing over the next seven years. Oil drilling and mining will also be banned from the protected area. Opponents of the monument say that it will have devastating impacts on New England’s fishing industry, although, for his part, Kraus is wary of this claim.

“I don't think there are any fishermen who fish out there year-round,” Kraus says. “So my suspicion is that this is not a big economic problem. I've heard wildly exaggerated numbers about thousands of fishermen and millions of dollars, and the data just doesn't support that.”

But Kraus is looking forward to data the monument will provide on biodiversity, particularly as it’s affected by climate change.

“We live in a world where the oceans are warming fairly rapidly, and they are becoming more acidic,” Kraus says. “The climatological changes in ... the Gulf of Maine are happening faster than anywhere else in the North Atlantic, and so we really need reference habitats that are not disturbed by all kinds of human activities, and this is a really good one for that.”

And where humans are involved, Kraus thinks protected marine areas like the new monument can teach us a thing or two about preserving ecosystems, emphasizing lessons we learned the hard way from Hurricane Katrina, for example.

“If you look at the way in which we altered the coastal ecosystem outside of New Orleans, people are now realizing, oh my god, we've got to put back mangroves, we've got to get rid of these canals, we've got to do things that actually are more in keeping with the original shock absorbers that Mother Nature provided,” Kraus says. “I suspect that we're going to see that kind of discussion take place around marine national protected areas all around the country.”