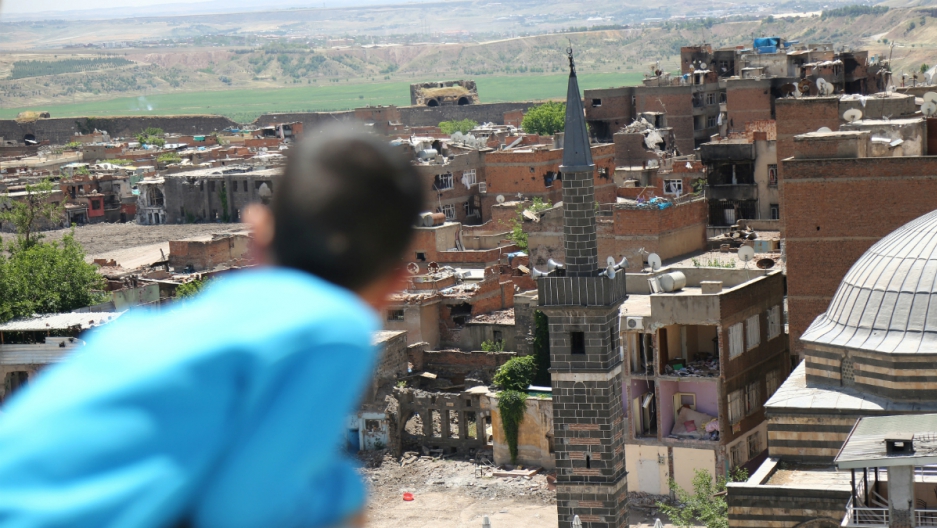 A boy looks at buildings that were damaged during clashes between Turkish security forces and Kurdish militants, in Sur district of Diyarbakir, Turkey, May 22, 2016.

For people in Turkey who watched the second presidential debate, one moment stood out that barely registered in the US.

The moment? When Hillary Clinton said that, if she were president, she would consider arming the Kurds.

“The Kurds have been our best partners in Syria, as well as Iraq,” Clinton explained, saying she thinks they could help the US win the fight against ISIS. It’s a view she’s expressed before.

But people in Turkey feel differently.

"That sends a shiver down the spine of the Turkish government," says Christina Asquith, the editor of our Across Women's Lives coverage — and based in Istanbul.

The Turks and the Kurds have been involved in civil war for almost 20 years. The conflict has waxed and waned as various rebel factions have attempted to separate and create their own state.

“People my age have that memory of a childhood of terrorist attacks just down the street from their houses,” says Asquith. “I have small children in elementary school here, so I’m talking to moms. And moms are thinking that they don’t want to raise their children through another civil war, like the kind that they went through, and maybe even worse.”

Of course Clinton’s aim is to decrease the violence in the region by getting rid of ISIS.

Many people in Turkey feel just as anxious about Trump becoming president. He is viewed as “unstable, prone to violence,” and likely “to make it worse,” says Asquith. But not a lot is known about his actual policies.

“Whenever Donald  Trump is asked about his foreign policy he always says he’s keeping it secret because he doesn’t want to reveal the secrets of the US,” says Asquith. “That is of course concerning to people in Turkey because they don’t know what to expect.”

In short, both Clinton and Trump are viewed as flawed contenders — at least in Turkey.

“I’m not really sure sure that either candidate is really going to comfort the Turks,” says Asquith.