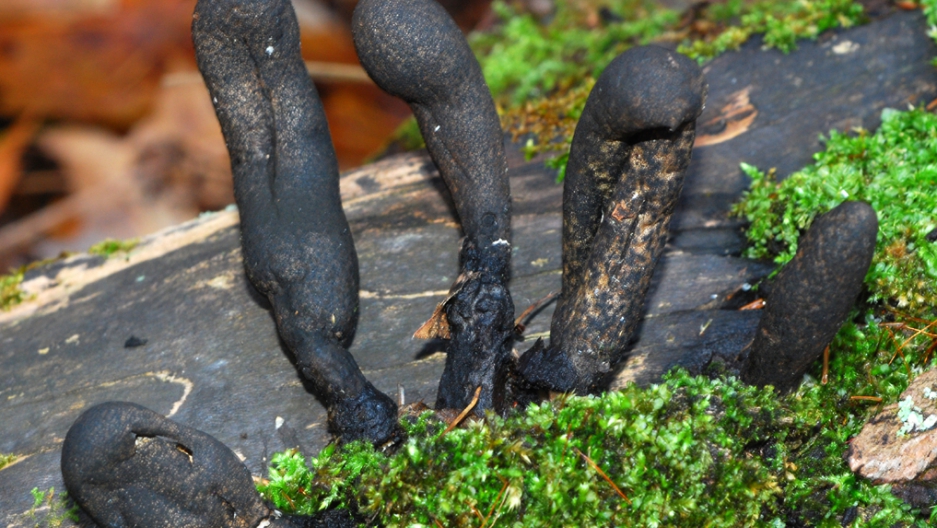 Mushroom photographer Noah Siegel found what he identified as Xylaria polymorpha in Massachusetts.

It’s easy to see why the fungus Xylaria polymorpha might spook someone.

It’s often evocative of dingy human digits reaching out from unknown depths beneath the forest floor, earning it the nickname “dead man’s fingers.” It sometimes grows as a single stem, but more frequently, two to five branches appear clustered together. Each “finger” can grow up to eight centimeters tall, though they’re usually stubbier, says Tom Volk, a biology professor who teaches mycology at the University of Wisconsin-La Crosse.

Despite its morbid appearance, X. polymorpha seems to be innocuous — at least to humans. It’s a wood decay fungus that grows alongside or on top of tree roots, and is commonly found east of the Rocky Mountains. (Volk adds that X. polymorpha appears to be be a member of what’s called a “species complex,” which entails a group of closely related species that are hard to tell apart.)

The fungus begins cropping up in the spring as whitish fruiting bodies that produce conidia, or asexual spores. Eventually the conidia flake off, and by autumn, the finger-like bodies turn bumpy and brown or black on the outside while remaining white on the inside.

A cross-section of one of the “fingers” at this mature stage would reveal a series of tiny, black, flask-shaped dots called perithecia embedded in the outer layer of tissue. Each perithecium contains a layer of spore-filled sacs called asci. To disperse these sexual spores, each ascus elongates one at a time into the outer tip of the perithecium until it’s exposed to the air, and then it shoots the spores out. It recedes after that, and another ascus begins growing toward the tip.

“So that has to happen for every one of the asci in there. It has to grow out individually to be able to disperse its spores to the outside,” Volk says.

This process can take a while. While many mushrooms live only a few days and disperse all their spores over the course of that time, “it can take several months or even years” for the X. polymorpha, Volk says.

“This is to the advantage of the fungus; it’s a time-release mechanism that ensures that at least some of the spores will be dispersed during a favorable time” — that is, when conditions are wetter and more conducive to spore germination.

X. polymorpha isn’t considered edible — it’s hard and its texture is wood-like, Volk says. So if you’re out hunting mushrooms, it’s best to just wave to these fingers and pass on by.