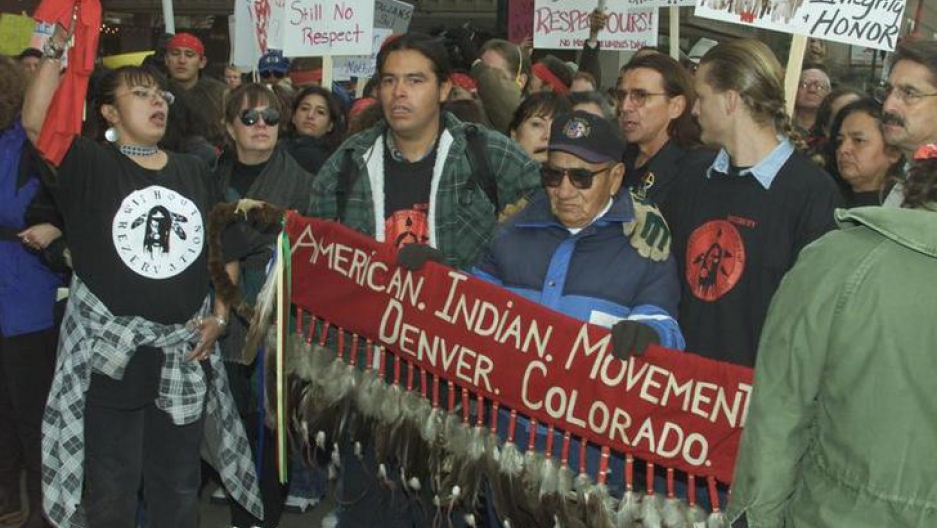 In October, 2000 American Indians blocked the parade route of Italian Americans celebrating Columbus Day in downtown Denver. The protestors decried the use of Columbus's name in the parade citing that Columbus was a slave trader and a killer. 16 years later, Denver's City Council unanimously approved a new holiday: Indigenous People's Day.
Credit:

Denver, Colorado has joined the small but growing list of US cities that are done with Columbus Day.

Last week, the city council there voted unanimously to instead mark the second Monday in October as Indigenous Peoples Day.

Native American activists have pushed for years to abolish the holiday because it celebrates the European explorer Christopher Columbus arriving in 1492 to “discover” a continent already populated by hundreds of indigenous peoples. The holiday and the man came to symbolize widespread colonization and the decimation of indigenous cultures in both North and South America.

Denver’s city councilors said their proclamation is part of this movement to honor Native Americans and recast the historic role that Columbus actually played some 500 years ago.

"Our city owes our very founding to the indigenous peoples in Denver," City Councilman Paul Lopez said after the vote.

"We do this because our history books erase such history," Lopez said. "You honor it by making it no longer invisible."

“I myself am Lakota, Ojibwe, and Akimel O'odham," Maymangwa explained. "I feel proud that people are beginning to talk about what that means — to be an indigenous person. Residents of Denver probably remember that not so long ago there was a pretty forceful clash between those who support Columbus Day and those who didn’t."

Maymangwa says the new holiday marks a victory and shows “that education and knowledge have taken hold in our city, and that we can change the narrative into something that honors and recognizes the contributions that indigenous people made."

"I'm very proud that my daughter will have that as part of her experience growing up in a city that recognizes indigenous people.”

The new holiday in Denver is mostly symbolic. Most residents still have to go to work. Still, Maymangwa says the city’s decision shows attitudes are changing.

“History from his perspective is told by victor, and in our case the conqueror," she said. "Colonial perspectives of our history do not work for us. They’re wrong.”

this is such a powerful video!! we should never celebrate christoper columbus #IndigenousPeoplesDay pic.twitter.com/ew48iAESzW

Centuries ago, the Arapaho and Cheyenne tribes used land and rivers around Denver for seasonal encampments. Today American Indians representing more than 100 tribes live in and around Denver.