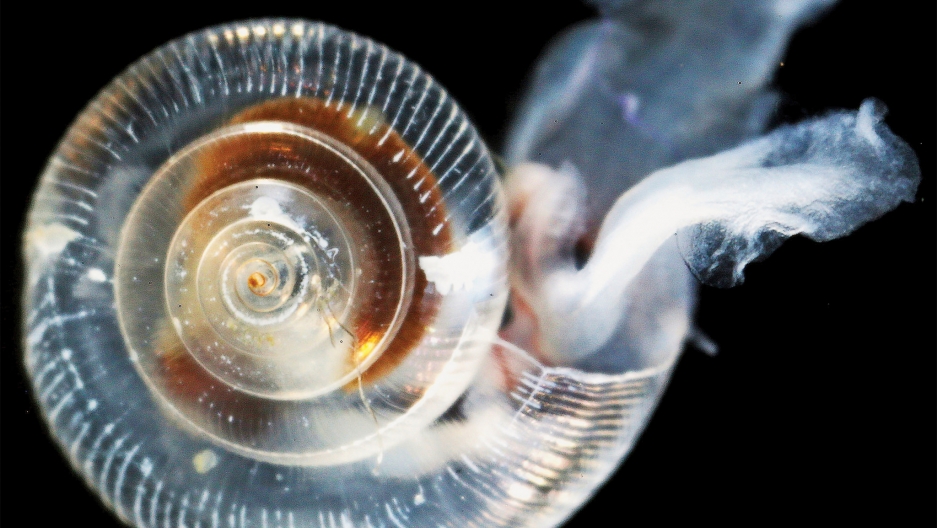 This is an unhealthy pteropod showing effects of ocean acidification — including ragged, dissolving shell ridges on the upper surface, a cloudy shell in the lower right quadrant and severe abrasions.

Earth’s atmosphere isn’t the only place taking the heat of our carbon dioxide emissions.

Thirty percent of the carbon dioxide we put into the atmosphere is actually absorbed by the Earth’s oceans, spurring a chemical reaction that makes the seawater more acidic.

And while changes in seawater pH can be harmful to many types of marine life, scientists are especially concerned about organisms like shellfish and coral, whose calcium carbonate structures dissolve in acid.

“Over the last 200 years … the ocean has become approximately 30 percent more acidic, which is really just a huge change if you think about it,” Jeffers says. “For example, an oyster that used to be able to build its shell, the 30 percent [increase in acidity] changes [it] enough to make that shell begin to dissolve. And in the last 300 million years of Earth's history, that is the fastest acidification event that the Earth has experienced.”

Jeffers says that in 2007, the Center for Biological Diversity began pressing the EPA to tighten its pH standards for coastal waters, using the Clean Water Act to make its case.

The EPA did not respond to petitions by the Center for Biological Diversity leading up to the lawsuit, or Life on Earth’s requests for comment.

Jeffers acknowledges that ocean acidification is an international issue that can’t be solved without controlling carbon emissions and transitioning to renewable energy on a global level. But in the near term, she says, there are ways of mitigating acidification locally. The Center for Biological Diversity hopes tighter EPA criteria will help limit local pollution sources.

“We can reduce local inputs that are increasing acidification,” Jeffers says. “Local runoff, local stormwater, agricultural discharge, those are all discharges that contain chemicals that exacerbate acidification. If we can get those local pollution sources under control, that might give the ecosystems a bit of a time to adapt or to get used to those acidified conditions while we tackle climate change.”

For Jeffers and her team, the lawsuit is about gaining momentum against a rising tide.

“We have to start somewhere, and the EPA has acknowledged that the Clean Water Act is applicable to ocean acidification and that it is their duty and the states’ duty to identify waters that are impaired,” Jeffers says.

The EPA has 60 days from "service of process" to respond (to the legal paperwork). From there, they may file a motion to dismiss the Center for Biological Diversity’s complaint, or choose to answer it.