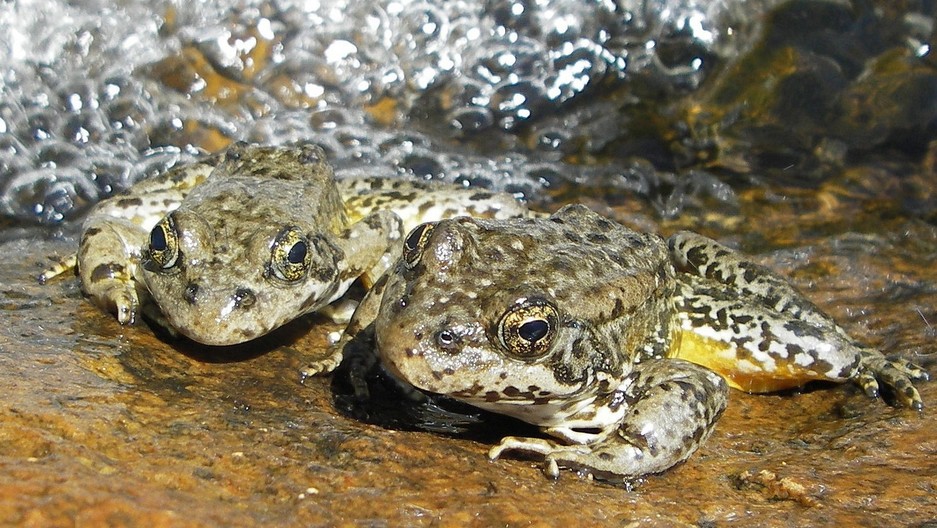 A pair of Sierra Nevada mountain yellow-legged frogs (Rana sierrae) is pictured here. Populations have been devastated in recent years by the chytrid fungus.

California Department of Fish and Wildlife/CC BY 2.0

The mountain yellow-legged frog lives high in the remote alpine lakes of California’s Sierra Nevada range, but its population is being decimated by a microscopic, global scourge.

This disease, known as chytrid fungus, irritates the frogs' skin, and causes it to slough off. It can be deadly, as amphibians' outer layer helps them to absorb nutrients and breathe underwater. In recent years, the spread of chytrid fungus has devastated hundreds of amphibian species worldwide.

But now, scientists in the California’s Bay Area are working on a treatment that they hope will help save the mountain yellow-legged frog and other threatened populations in the wild: immunizing young frogs to help them live with the chytrid fungus, at least long enough for them to develop some form of resistance.

Vance Vredenburg, a biology professor at San Francisco State University, says that for amphibians, the chytrid fungus makes the human Black Plague “look like a drop in the bucket.” And just as the medieval plague pandemic had rodent vectors, it seems that the chytrid fungus is also getting help from friends — like us.

“This fungus is being moved around probably on the backs of amphibians that we've let go by accident — things like American bullfrogs or African clawed frogs,” Vredenburg says. “But [it’s] probably moving around in other ways, as well. There's an example in the Caribbean where frogs were in bananas that were shipped from one island to another and caused the decline of the mountain chicken frog, which was a really terrible case.”

Vredenburg has seen what frog habitats look like after the chytrid fungus sweeps through. He says that the scale of sick and dying animals is “really not something we’re used to seeing in nature.”

“For example, in the Sierra Nevada, when I witnessed the die-off of mountain yellow-legged frogs from this chytrid fungus, I saw literally tens of thousands of dead frogs littering the shorelines of these beautiful pristine lakes,” Vredenburg says.

Jessie Bushell is the director of conservation at the San Francisco Zoo, where a new inoculation regimen has scientists hopeful about the next generation of yellow-legged frogs. Bushell says that recently, one research team arrived at a remote California lake to find no surviving adult yellow-legged frogs. But the plague had passed over lots of tadpoles. In the cold alpine climate, yellow-legged frogs can spend up to three years in the tadpole phase, and during that time, the fungus is less lethal.

“They scaled this operation with the National Park Service, with Fish and Wildlife Service, with the UC Davis biologists working there, and they collected every last tadpole and helicoptered them to my zoo and also to the Oakland Zoo, one of our collaborators on the project,” Bushell says. “It was an amazing thing to see this fire rescue helicopter arrive with basically, just like, buckets of tadpoles.”

In captivity, the tadpoles grew into froglets — and then began their anti-chytrid regimen. Scientists treated them with an antifungal medication, so they could develop normally — and then after nine months, re-infected them with the chytrid fungus.

“We wanted to stimulate their immune system so that when we released them ... their bodies would recognize the fungus as something to fight against. They would have antibodies already in their system,” Bushell says.

After the frogs’ immune systems kicked in — but before the fungus became life-threatening — they were again treated with an antifungal medication. This summer, about 150 mountain yellow-legged frogs were released back into the lake they’d left as tadpoles. Bushell hopes that when they encounter chytrid fungus again, their bodies will be able to fight it off.

Mountain yellow-legged frogs are particularly susceptible to chytrid fungus, but other frogs that share their habitat, like Pacific chorus frogs, can handle much higher levels of infection. Vredenburg says that amphibians can develop resistance to chytrid in any of several ways.

“One is an actual adaptation from the host itself, from the frog itself, where they may, for example, evolve the ability to create T-cells that attack [the fungus],” Vredenburg says.

Scientists think that other amphibians learn to alter their behavior in ways that harm the fungus, like spending more time in sunnier areas, where it doesn’t grow as well. According to Vredenburg, even microbiomes on an amphibian’s skin can aid in the fight against chytrid fungus.

“We've found that some of the species of bacteria on frogs and salamanders produce antifungals that actually kill the chytrid fungus, as well,” Vredenburg says.

As researchers continue experimenting with ways to save mountain yellow-legged frogs in the Sierra Nevada, they’re mindful about how their results can extend to saving other wild species affected by chytrid fungus. Vredenburg notes that there are over 6,000 species of frogs alone — far too many to inoculate, for instance.

“But I think it is possible in some places where we may be able to sort of stem the tide in a sense, and really keep the fungus from overwhelming these animals,” he says.

Bushell agrees. “We're hoping that this is not a permanent solution,” she says. “We're not going to be able to immunize all these frogs forever, but as they need to be done, we're going to be available to help with this.”