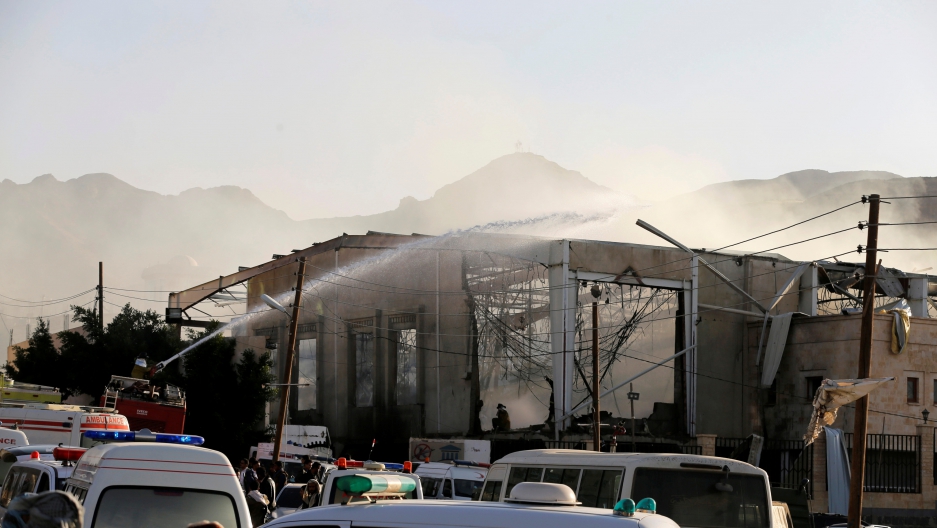 A fire engine sprays water on a damaged building at the site of an airstrike that witnesses said was by Saudi-led coalition aircraft on mourners at a hall where a wake for the father of Jalal al-Roweishan, the interior minister in the Houthi-dominated Yemeni government, was being held, in Sanaa, Yemen on Oct. 8.

Rebels in control of Yemen's capital accused the Saudi-led coalition fighting them of killing more than 100 people and wounding hundreds more Saturday in air strikes on a funeral in Sanaa.

The coalition, which has come under increasing international scrutiny over alleged civilian deaths, denied any responsibility for the attack.

"The toll is very high: more than 520 wounded and more than 100 martyrs," the spokesman of the health ministry in Sanaa, Tamim al-Shami, told rebel Almasirah television.

It was one of the deadliest attacks since the coalition launched a bombing campaign against the Shiite Huthis in March 2015.

In September 2015, a suspected coalition air strike killed at least 131 civilians at a wedding near the Red Sea city of Mokha. The Saudi-led alliance denied any involvement.

And in March this year, Saudi-led air strikes on a market killed at least 119 people, including 106 civilians, of which 24 were children, in the northern rebel-held province of Hajja.

On Saturday, emergency workers pulled out at least 20 charred remains and body parts from the gutted building in southern Sanaa as others scoured the wreckage for survivors, an AFP photographer at the scene said.

Some of the wounded had their legs torn off and were being treated on the spot by volunteers, he said.

In a statement to AFP, the Saudi-led coalition said it had no operations at the location and "other causes" for the incident must be considered.

The coalition "has in the past avoided such gatherings and (they) have never been a subject of targeting," it said.

The insurgent-controlled news site sabanews.net said coalition planes hit after hundreds had gathered to mourn the death of the father of rebel interior minister Jalal al-Rowaishan and denounced a "massacre."

The Huthis did not say if Rowaishan was present in the building at the time of the attack, nor did they indicate if other senior figures were attending the funeral.

The Iran-backed Huthis swept into Sanaa in September 2014 and advanced across much of Yemen, forcing the internationally recognised government of President Abedrabbo Mansour Hadi to flee.

More than 6,700 people — most of them civilians — have been killed in Yemen since the coalition intervened in support of Hadi, according to the United Nations.

Fighting has flared since UN-brokered peace talks between the government and insurgents collapsed in August.

People had come from all over Sanaa to attend the funeral, said Mulatif al-Mojani, who witnessed Saturday's air strikes.

"A plane fired a missile and minutes later another plane hit" the building where they had gathered, he told AFP.

Another witness, who declined to give his name, angrily described the attack as a "war crime".

Ambulance sirens blared as they transported the wounded away and residents said local hospitals had issued an appeal for blood donations.

The coalition has come under mounting international criticism in recent months over the civilian death toll in its aerial campaign.

A diplomatic source told AFP that intensified coalition bombing aims "to break" the rebels but warned that "this will not work."

A UN report in August said coalition air strikes are suspected of causing around half of all civilian deaths in Yemen.

It called for an independent international body to investigate an array of serious violations by all sides, after 4,000 civilians have been killed.

European states led by the Netherlands were defeated last week in a push to establish that inquiry.

The coalition has told AFP it uses highly accurate laser- and GPS-guided weapons and verifies targets many times to avoid civilian casualties.

The so-called supreme political council set up by the Huthis and their allies — supporters of ousted president Ali Abdullah Saleh — vowed to "use all means to respond to this crime" and urged Yemenis to protest outside UN offices in Sanaa on Sunday.

In addition to the mounting death toll, Yemenis are facing twin health and hunger crises.

On Friday it also reported cases of cholera in Sanaa and third city Taez.