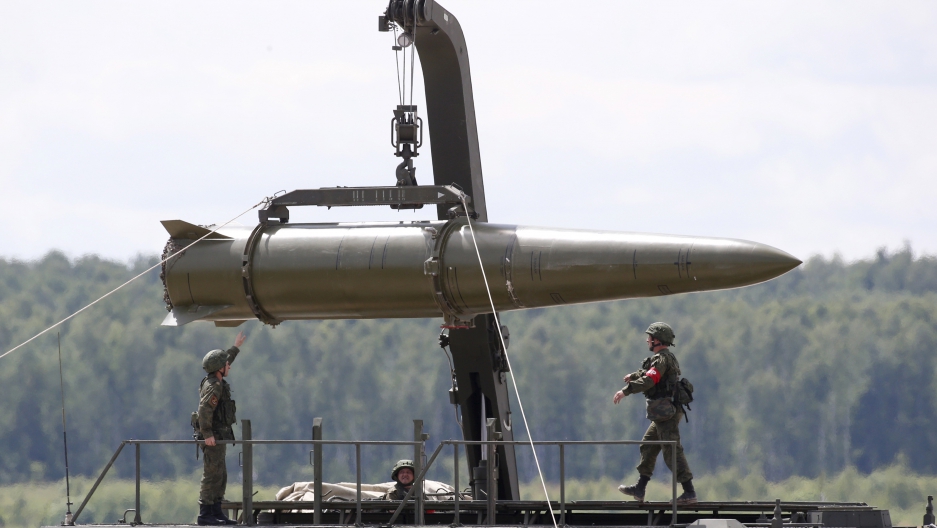 Russia is again deploying nuclear-capable Iskander missiles into its Kaliningrad outpost that borders two NATO members, Lithuania said Saturday, warning the move was aimed at pressuring the West into making concessions over Syria and Ukraine.

Poland also reacted angrily to Moscow's move while Lithuania added that it could breach a key nuclear weapons treaty.

"Russia is holding military exercises in Kaliningrad, and its scenario includes deployment of Iskander missile systems and the possibile use of them. We are aware of it," Lithuanian Foreign Minister Linas Linkevicius told AFP.

He said modified Iskander missiles had a range of up to 435 miles, which means they could reach the German capital Berlin from the Russian exclave, which is sandwiched between Poland and Lithuania.

Linkevicius said that this time he thought Moscow was using the move to "seek concessions from the West."

"Such actions are possible violations of the Intermediate-range Nuclear Forces Treaty," the foreign ministry said in a statement.

Russia's defense ministry on Saturday confirmed deployment of the Iskander hardware but dismissed Western concerns, saying that "contingents of missile troops have been moved many times and will continue to be moved to Kaliningrad region as part of a Russian armed forces training plan."

Kaliningrad is "not an exception" to drills conducted across the country, spokesman Igor Konashenkov said in an emailed statement.

Estonian media reported on Friday that Russia was shipping Iskanders on a civilian vessel in the Baltic sea.

Konashenkov said that one Iskander was placed in the open to "confirm the parameters of operation" of a US intelligence satellite he alleged was flying overhead.

Moscow sent Iskanders to Kaliningrad in 2015 as part of a series of mammoth military drills as tensions with the West reached their worst point since the Cold War, triggered by Russia's 2014 annexation of Crimea from Ukraine and its military campaign in Syria a year later.

The United States on Friday called for Russia and Syria to be investigated for war crimes for the bombing of hospitals in Aleppo, and accused Moscow of trying to "interfere" with the American presidential election.

Judy Dempsey, a Senior Associate at Carnegie Europe, told AFP Saturday that Moscow's latest Iskander deployment to Kaliningrad is "a way to divide the West" just weeks before the US presidential election.

"These types of moves by Russia are making the Europeans and the US nervous. Putin is pressing all the buttons," Dempsey said.

"Tensions over Iskander have been going on for seven years. It's a very tried way to pressure the West.

"The latest events in Kaliningrad are a way to intimidate the Baltics and Poland," she added.

"They cause higher tension in the region, reduce trust, and have a negative impact on security in the region."

Michal Baranowski, Warsaw office director of the German Marshall Fund of the United States, said the Iskander deployment is "obviously an openly aggressive move, but it isn't something that would require an immediate response from NATO — it fits the previous pattern."

"I would be much more worried if Moscow were to deploy greater conventional forces to Kaliningrad," he told AFP Saturday.

Vilnius University analyst Laurynas Jonavicius however warned the sabre-rattling by "revisionist Russia" raises the risk of incidents in the Baltic region which could spark a major crisis.

Meanwhile, Lithuanian intelligence warned earlier this year that Iskanders deployed in Kaliningrad "may be used for hindering the actions of NATO's allied forces in the region."

Since the start of the Ukraine crisis in 2014, Russia has flexed its muscles with a series of war games involving tens of thousands of troops in areas bordering NATO Baltic states.

NATO responded by agreeing to deploy four battalions in Poland, Lithuania, Latvia and Estonia as of next year to bolster its eastern flank.