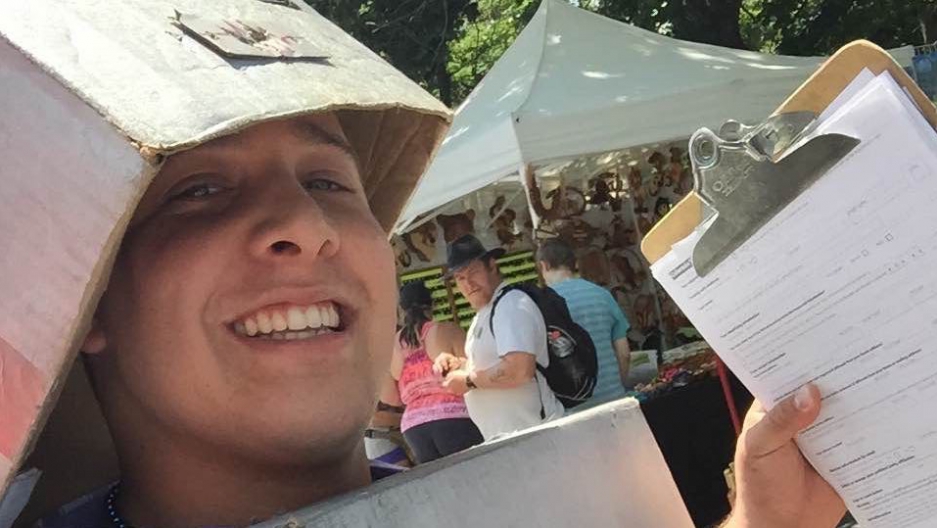 Antonio Valdovinos, a "Dreamer" who started La Machine Field Operations, tries to get out the vote.

Of the approximately 27.3 million Latinos in the United States who are eligible to vote in the 2016 elections, it’s estimated that only about half of them — 13.65 million — will actually cast a ballot.

Speaking at a recent Global Nation forum on the Latino vote in Arizona, Antonio Valdovinos says that Latino voters in the area don’t feel engaged in the political system. And Valdovinos has spent a lot of time talking to voters, as he’s the founder of La Machine Field Operations, which works to get progressive candidates elected in Arizona and elsewhere.

Recently, Valdovinos spoke with an 18-year-old woman who told him she wasn’t planning to vote because she felt that the presidency was "predetermined." That kind of apathy, he says, is heartbreaking. “It’s a very effective method of keeping young people from participating.”

At La Machine, an army of volunteers and organizers get the vote out by any means possible — registering voters, phoning eligible voters, and even, according to its website, collecting pledge-to-vote postcards at concerts.

But when Election Day rolls around in November, Valdovinos himself won’t be casting a ballot — his immigration status prevents it. Born in Colima, Mexico, and brought to the US when he was 4 years old, Valdovinos grew up undocumented in Phoenix, Arizona. After he graduated from high school, he wanted to join the Marines.

“My dream was being in the US Marines and serving this country,” he says. “I'd pledged allegiance ever since kindergarten.”

But at 18, when Valdovinos tried to enlist in the Marines, he was turned away; he was part of a generation of undocumented youth, or "Dreamers," in the United States, whose hopes for legal residency and a path to citizenship were deferred when the Dream Act failed to pass the Senate in 2010.

Another option might have been college. But under Proposition 300, which passed in 2006, Arizona prohibited undocumented students from receiving in-state tuition. In an essay for Latino Giant, Valdovinos writes that “as soon as I realized that I would not be able to afford attending college, I became politically involved here in my city with a city council campaign in district 5.” Democrat Daniel Valenzuela won big in that 2011 campaign, and outreach led to a five-fold increase in Latino voter turnout.

Valdovinos was hooked. He campaigned for more Democratic candidates, including Kate Gallego’s successful south Phoenix city council bid in 2013 and her husband Ruben Gallego's Arizona congressional campaign in 2014, for which Valdovinos served as Field Director.

In 2012, the Obama administration passed an executive action called the Deferred Action for Childhood Arrivals, or DACA. The policy allows some undocumented immigrants who entered the US as children, like Valdovinos, to work legally here.

“I'm a living embodiment of what action looks like,” Valdovinos says. “I received deferred action, DACA, from President Obama, which allowed me to get my first job, start paying taxes, and I started my own company, which now employs over 40 people.”

That company is La Machine. And in Arizona and across the US, there’s work to be done.

“The real work that's here at hand is to get more people to be part of the process, to elect better people into office,” Valdovinos says.

Antonio Valdovinos spoke as part of the live Global Nation panel discussion, co-produced by PRI and the BBC World Service, which was held in Phoenix on Oct. 4.