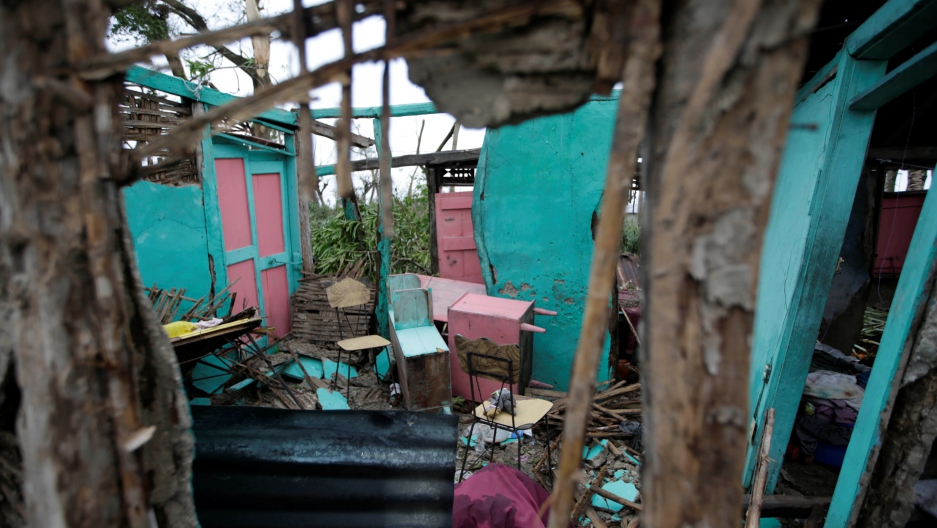 The interior of a destroyed house is seen through a hole in a wall after Hurricane Matthew in Les Cayes, Haiti, October 6, 2016.

Some three million people on the US southeast coast faced urgent evacuation Thursday as monstrous Hurricane Matthew — blamed for hundreds of deaths in Haiti alone — bore down for a direct hit on Florida.

President Barack Obama declared a federal state of emergency in Florida, as highways there and in neighboring states clogged up with people streaming inland to escape the storm blasting its way through the Caribbean.

Officials warned the category four hurricane will be ferocious and dangerous: beach-eroding waves as tall as two story buildings and winds strong enough to snap trees and blow away roofs or entire houses.

Poor and vulnerable Haiti remained essentially cut in half two days after Matthew hit. Interior Minister Francois Anick Joseph said at least 108 Haitians have died, with 50 killed in a single town in the south where the coastline was described as wrecked.

In its latest target, the storm slammed the Bahamas Thursday, blowing off roofs, downing trees and knocking out power. Weather forecasters working out of Nassau airport had to flee for their lives.

A hotel employee in Nassau described the whole glass entrance of the building being blown in by fierce 100 mph winds.

"You could see the wind was pushing it and pushing it, and it was shaking," said the woman, who asked not to be named. "I screamed out as it shattered in the lobby."

One resident living southeast of Nassau took to Facebook to plead for emergency rescue.

"I'm on a chest of drawers. Phone battery low."

Matthew was forecast to be very near or over the east central coast of Florida Thursday night or early Friday.

As US gas stations ran dry, frantic shoppers flocked to stores for essentials.

They snapped up batteries, transistor radios, bread, canned goods, bottled water, ice, pet food, toilet paper and assorted supplies to gird for what Florida Governor Rick Scott warned would be a devastating, killer storm, with winds howling at up to 150 mph.

Matthew has regained strength as it approaches Florida and was restored to category four by the National Hurricane Center on its 1-5 scale.

Around 1.5 million coastal dwellers are under an evacuation order in Florida alone. More than a million others in South Carolina and other coastal states were also told to escape the path of the storm, which first made landfall in Haiti Tuesday.

Mandatory evacuations were also ordered in six coastal counties in Georgia that are home to some 520,000 people.

Some 6,000 US Marine recruits were evacuated off a base at Parris Island, South Carolina.

Miami International Airport cancelled 90 percent of its incoming and outgoing flights on Thursday.

Even Walt Disney World in Orlando, 35 miles inland from the Atlantic, said it would close early on Thursday and stay shut Friday.

The National Hurricane Center called Matthew the strongest in the region in decades.

It said waves whipped up by the hurricane could be as high as 18 feet — nearly as tall as a two-story building. Debris tossed into the air by the storm will be capable of blasting through buildings and cars, the NHC said in a bulletin.

Scott said the forecast is for storm surges of five to nine feet, not counting the waves on top of that.

He said power outages, possibly lengthy, are a near certainty.

Amid the massive flight, officials warned a worrying number of people were not heeding the evacuation order.

In South Carolina's coastal Charleston and Beaufort counties, Governor Nikki Haley said 175,000 people had evacuated as of Thursday morning — out of 250,000 who were told to leave.

"That is not enough, we need to have more people evacuating," she said.

As Matthew barreled northwest, Caribbean nations continued the grim task of assessing damage and fatalities, with four dead in the Dominican Republic in addition to the surging toll in Haiti — which until now stood at 23.

In Cuba, where some 1.3 million people were evacuated, there were no reported fatalities but four cities in the east were cut off because roads were blocked by large chunks of rock hurled by the storm.

Haiti had not been hit head on by a category four storm in 52 years. The country's presidential election, scheduled for Sunday, has been postponed.

In one southern department alone, 29,000 homes were destroyed, the interior minister said.

The town of Roche-a-Bateau, where at least 50 died, is devastated, said a local lawmaker, Ostin Pierre-Louis. "No one's house is left standing," he told AFP.

He added: "I don't know what to do to help these people because we have not received any aid."