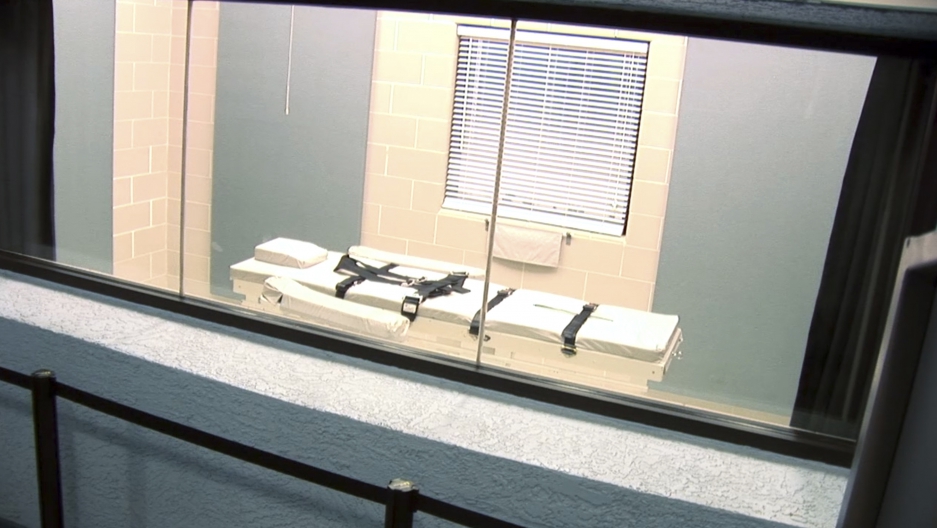 The execution chamber at the Arizona State Prison Complex-Florence is shown.

Courtesy of the Arizona Department of Corrections

Frank Thompson oversaw the only two executions in Oregon in the last 54 years.

“During the process of one execution, the individual let us know that the straps binding his hands to the gurney was hurting. ... I gave instructions to make adjustments so that this hands wouldn’t hurt,” Frank Thompson, former superintendent of the Oregon State Penitentiary says. “He looked up at me and says, ‘Thank you boss.’”

That moment of humanity in what Thompson calls a “terrible process” stays with him.

He took on the role of superintendent after serving as a military policeman in the Vietnam War, and ran prisons for more than 10 years. After returning from service in Vietnam, he demonstrated against the war. After overseeing executions, he now wants to abolish them.

Despite his experience — or because of it — when asked if he believes that capital punishment makes the public safer, he replies in a heavy, slow voice, “Oh, absolutely not.”

For the first time since 1971, people seem to share Thompson’s sentiment — fewer than half of Americans support the death penalty. That's according to a poll released last week by the Pew Research Center, which found that 49 percent support capital punishment, and 42 percent oppose, trend lines that are increasingly converging.

Despite these trends, Ohio officials announced this week that the state would resume executions in January after a two-year hiatus.

Thompson is happy that national views toward capital punishment appear to be shifting. His main argument against capital punishment is one of public safety. Murder rates in non-death penalty states are consistently lower than those with the death penalty — and a recent survey of criminologists by the University of Colorado found that 88 percent of criminologists believed that the death penalty does not act as a deterrent for future crimes.

“In the process of that first execution,” which happened 18 months into his position as superintendent, “I came to the realization that I was at my very core against the death penalty,” Thompson says.

While the second execution was not any easier for Thompson, he believes that “society has to have professionals that can do the difficult jobs -- even if they don’t believe in it -- as long as they have the ability and the capacity to work to correct the system.”

In addition to overseeing the execution, Thompson also had to assist in rewriting the policy from death by gas chambers to death by lethal injections.

“I was a leading a group of men and women into the process of how to kill a person — how to take a life a of human being in the name of public policy that could not be shown to make the public any safer,” he continued.

Thompson says he was able to do his job because he also had the ability to criticize the process. He gave his director input, who then spoke to the governor.

“It takes an inside person to have that kind of a voice,” Thompson says. “If you have the capacity to make change from within, from a credible experience, that’s the way to make a real difference."

When asked how he would respond to someone who was enthusiastic about putting a criminal to death, Thompson says he understand that sentiment.

“I had a best friend, his name was John Tilman Hussey, who was a police officer who was abducted by felons who were attempting to avoid being captured. They killed him. I remember when I was supporting the death penalty — hoping that those persons would get caught and that they would be executed,” Thomson says.

“I understand those emotions,” Thompson continued. “But vengeance does not make good public policy.”