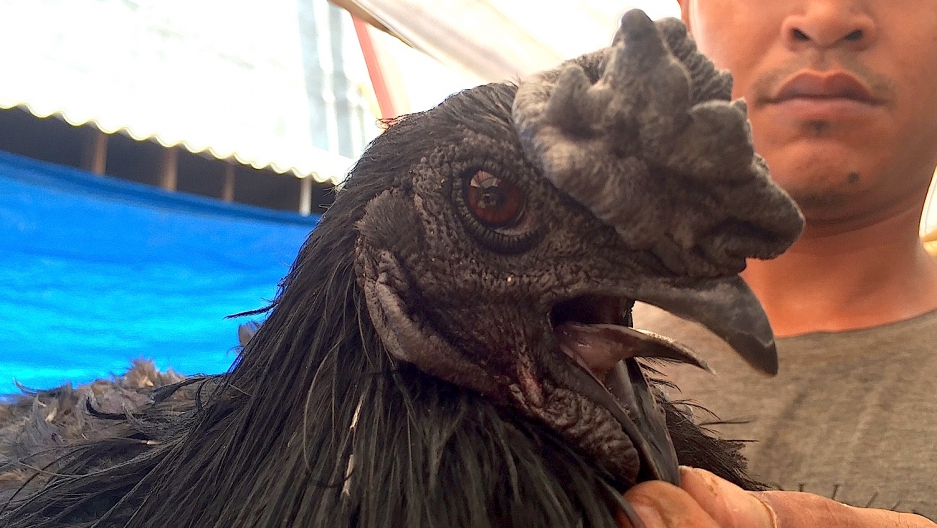 Firdaus holds up one of his ayam cemani chickens for inspection in Java's Pondok Gede village.

Poultry is seldom seen as precious. After all, the planet is teeming with 20 billion chickens.

But none are as bewitching as the “ayam cemani.” This rare creature, native to Indonesia’s island of Java, is the most magnificent breed of chicken in the world.

Its feathers are as dark as the cosmos. So is its flesh. In fact, from talon to tongue, every bit of this chicken is the color of licorice — even its bones and internal organs.

The ayam cemani’s plumage, however, is not dull black like a common crow. It’s far more luminous. Imagine the pelt of freshly shampooed panther.

Behold the most magnificent chicken on earth: the ayam cemani, onyx black from tongue to talon. Found this one in a crowded village outside Jakarta, #Indonesia.

After several millennia of obscurity, this all-black chicken suddenly has international cachet — at least among the new wave of chic chicken farmers in the West.

New York Magazine draped an ayam cemani in pearls and ribbons for an ironic photo shoot. As one boutique chicken vendor tells the outlet Nautilus, the bird is suited for the person who “plunks down $1,500 for a Williams-Sonoma chicken coop.”

That vendor, GreenFire Farms in Florida, dubbed ayam cemani the “Lamborghini of chicken.” Quite a few outlets, including Food & Wine, gush that a single all-black rooster can sell for $2,500.

Our Ayam Cemani's jewel encrusted debut in the 2014 NY Mag gift issue. Lots of rooster drama behind that shot. pic.twitter.com/BV4466WPPQ

But all this hype feels worlds removed from Java, the ayam cemani’s homeland.

Here, the chickens are raised in rickety bamboo coops, not deluxe hen houses ordered online. They’re not cool per se. Rather they’re revered as creatures with enchanted blood.

“Hardly anyone eats them,” says Firdaus, 22, an ayam cemani farmer in a T-shirt and baseball cap. He’s located outside Jakarta, the Indonesian capital, where he raises a dozen-plus ayam cemani birds in a muddy back lot. “Most people are interested only in their magical blood.” 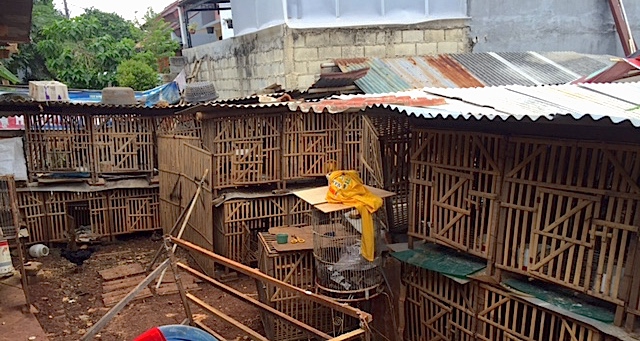 Firhaus' yard is crowded with coops for his small flock of ayam cemani.

The chickens that Firdaus nurtures are owned by devout Muslims, Jamal and Tri Wahyuni, who are husband and wife. They say beliefs about the chicken’s supernatural powers are bogus. But they’ll happily sell to believers.

These old-school ayam cemani farmers are oblivious to the bird’s newfound Western buzz. Here, they explain why the chicken is so cherished in Java and debunk stubborn rumors about its price and blood.

HOW EXPENSIVE IS THIS CHICKEN?

Not nearly as pricey as the clickbait posts imply.

Online media outlets widely set the ayam cemani’s price tag at $2,000 or more. But in Indonesia, an adult rooster sells for just $35 to $70.

Even boutique retailer GreenFire Farms now sells them for $199 in the US. The farm appears to have initially charged $2,500 when it first offered ayam cemani two years ago — but that lofty price reflected the limited supply in America at that time.

But here’s a caveat: Some buyers in Indonesia will pay thousands for an ayam cemani if they believe its blood is as black as crude oil.

IS THE CHICKEN’S BLOOD REALLY BLACK?

“Black blood from ayam cemani chickens is a myth,” Jamal says. And according to GreenFire Farms, the chicken’s “blood color is always red. Hemoglobin is red, and all blood contains hemoglobin.”

In fact, blood is practically the only part of an ayam cemani that isn’t unusual. Slice open the chicken, and you’ll find midnight-black guts and muscles — but the blood will always run ruby red.

WHY DO PEOPLE WANT THIS CHICKEN’S BLOOD?

“It has healing qualities,” Firdaus says. It can reverse a run of bad luck, he says, or cure a wide range of physical maladies — even if it’s a pedestrian shade of red.

“You don’t need to rub it all over you face or arms,” he says. Just put it in a bowl, present it with other offerings and murmur the right incantations. This process is usually guided by an animist guru.

This is all spooky nonsense, says Tri, a 33-year-old mother in a turquoise hijab. Standing by the chicken coop, shaded by a corrugated tin roof, she eyes her own birds warily.

“There is nothing in the Quran about magic chickens,” Tri says. She adds that the chickens often give local kids the creeps.

WHY IS THE CHICKEN SO UNIFORMLY BLACK?

According to one study, more than 25 avian breeds with fibromelanosis are known “and almost all of them originate from Southeastern Asia.”

The most common is called the “Silkie,” a chicken with monochromatic feathers that resemble kitten fur. It’s far less rare than the ayam cemani and more often consumed, particularly in China and Vietnam.

WHAT DO BUYERS DO WITH THESE CHICKENS?

At Tri’s farm, she says, they usually cut the ayam cemani open, drain its blood into a bag and throw its resplendently feathered body in the dirt.

This is somewhat confounding to Firdaus, who adores the birds. He handles them gingerly and gives them gourmet feed: rice flecked with bits of corn and fish. (Basic chickens get plain white rice scraps.)

“You don’t want to stress them out. They’re quite delicate,” he says. “We have to come to them in a peaceful manner so they feel no panic.”

Not as otherworldly as it looks.

When buyers leave behind an ayam cemani carcass, Tri will scoop it from the mud. She’ll boil and pluck away its feathers, each one the color of shimmering onyx.

Then she’ll toss it in a wok, fry its jet-black meat in oil and serve it over a bed of rice.

“It looks weird,” Tri says. “But it tastes just like regular chicken.”