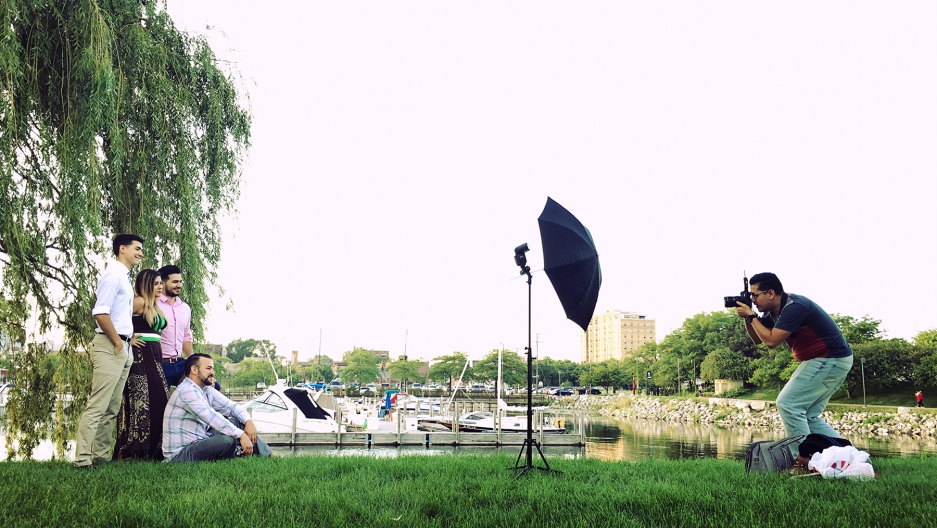 Benjamin Uribe comes to Detroit every year to shoot weddings, quinceañeras and engagement portraits. He’s from San Ignacio, Jalisco and is a piece of home for many immigrant families in the city. Here, the Hernandez family have their photo taken.

Bianca Morones is wild with excitement. After her recent marriage and new baby, she’s thrilled to have Benjamin Uribe take her family’s portrait. The occasion called for a new dress and a stylist came to her home to do her make-up.

The photographer, also known as Bengi, is a famed photographer from San Ignacio, Jalisco, who, Morones says, “only comes to Detroit once a year.”

Morones wanted Uribe to take photos at her big Mexican wedding a year ago, but couldn’t make it happen.

“My fiancé said that we would have to pay for his flight if we wanted him as wedding photographer.  We couldn’t add another wedding expense, so I didn’t contact him.”

It may seem extravagant to import a photographer from Mexico when there are so many in Detroit, but Morones wanted that feeling of Jalisco to jump out of the images.

“He had that Mexican feel to all his photos,” she says. His use of churches as backdrops combined with Catholic traditions and color adds to the Mexican mystique the diaspora longs for. 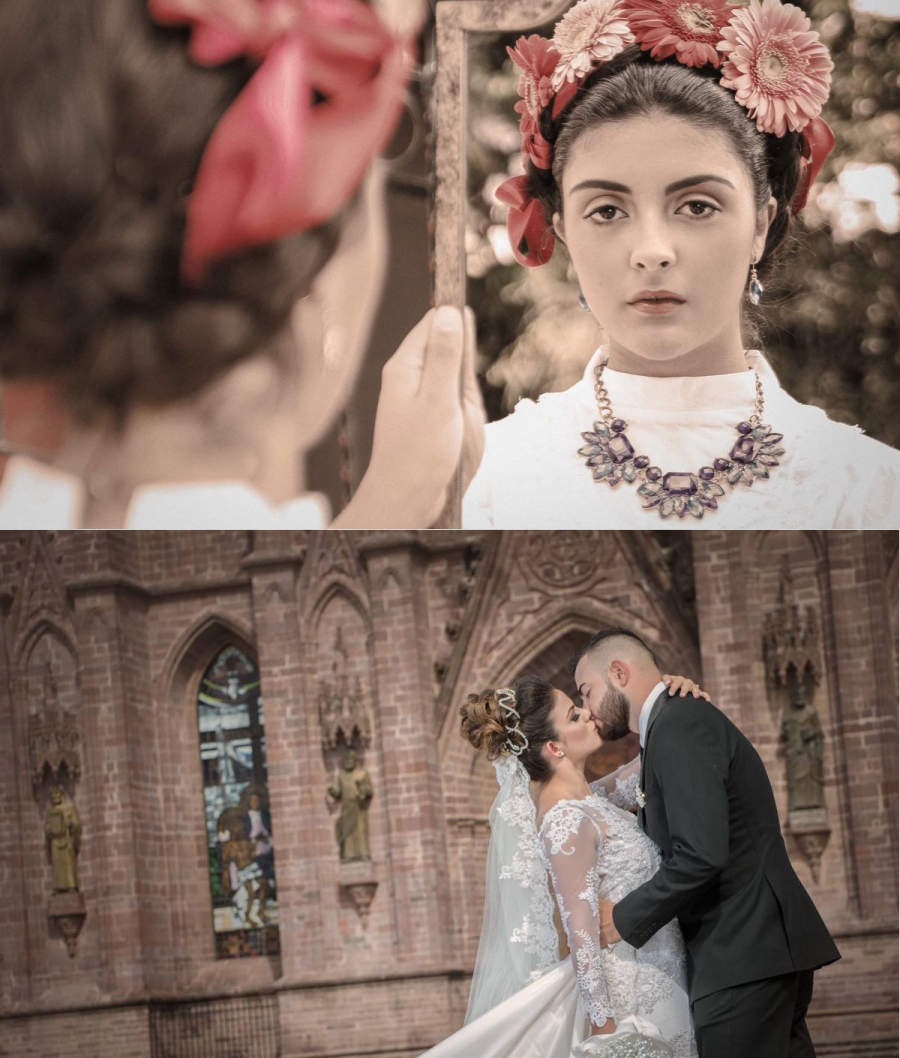 Photographer Benjamin Uribe takes photos that look like they could be in Jalisco — even if he’s shooting in Detroit.

Paying to fly a photographer in from Mexico isn’t uncommon. In fact, Mexican immigrant communities across the US often import someone — a priest to bless a new home or a photographer to take portraits — from their hometowns to mark important occasions.

“This phenomena is called topophilia,” says Xóchitl Bada, a professor in Latin American and Latino studies at the University of Illinois at Chicago. Topophilia literally means “love of place.”

“Having a photographer from their hometown brings an understanding of their culture. He understands how photos are taken in their towns, he knows how weddings, quinces and family events are lived,” says Bada. “If they can’t be in Mexico, they will import someone who can recreate it, as faithfully as possible.”

Most of Detroit’s Mexican immigrant community hails from the town of San Ignacio or the broader region of Jalisco. Better economic opportunities, more jobs and the promise of a better life pulled people from Jalisco to Detroit in the years after World War II and they've been steadily trickling in ever since.

The families opened dozens of restaurants, tiendas, dress shops and more. Their community offers many comforts from home, yet once a year Uribe makes a trip to Detroit to shoot weddings, quinceañeras and engagement portraits.

It’s several days into Uribe’s Detroit visit. He’s managing a packed schedule of catching up with friends and taking photos. He sends me a WhatsApp message saying he’s on his way to a location where he’s shooting the Hernandez family from southwest Detroit.

I arrive just before sunset on the Detroit riverfront, the location chosen by the Hernandez family. As I catch up with Uribe, he is already clicking away on the busy promenade.

The family of five is all dressed up for the photoshoot. The mom and daughter dress with a hint of Kardashian, overly glam yet somehow perfect for pictures.  The dad and three sons are dressed youthful and preppy. Pink shirts and shoes with no socks. 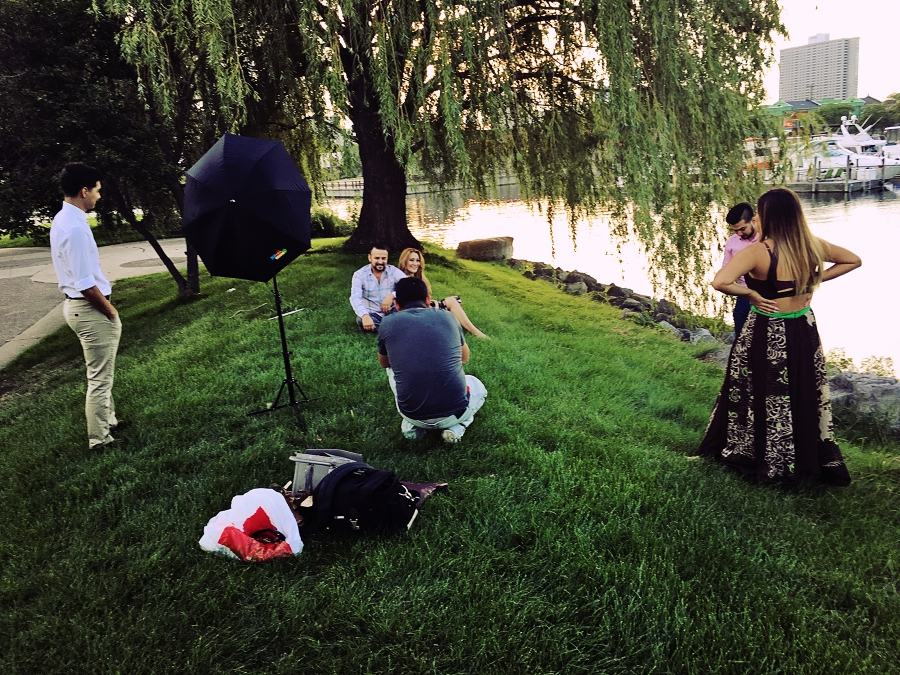 “Put your arm around your husband, it looks stiff just hanging there,” photographer Benjamin Uribe shouts to the Hernandez family. “And smile, a really big fake smile.” Everyone laughs and Uribe snaps away, obviously happy to catch the moment.

“I love that he speaks Spanish,” say Nydia Hernandez, the family matriarch. “Somehow he just knows us and I feel more comfortable. I went to a wedding in Mexico in the spring and had been after him to take our family's portraits ever since.”

“The photographer is more than just someone taking pictures,” Bada says. “He imports nostalgia. His mere presence ignites the smell of cornfields and things such as an avocado harvest that is engrained in their mind.”

The relationship between Detroit and San Ignacio is maintained by visits, but mostly through technology.

“We’re miles and miles away from Mexico but stay connected to our family and friends,” Hernandez says. “We know who is moving to the US, who has passed away and even know the latest gossip.”

What used to be a weekly or monthly phone call is now a daily Skype chat, Facebook or a WhatsApp post.

“The association the photographer brings is something that will transport you to a very sentimental place and bring you one step closer to your home, childhood, your parents, your grandparents, even to the accent of how people from that region speak,” Bada says.

For Uribe, the trips are opportunities to travel and photograph life events of a close-knit, extended community.

“I’d never come to Detroit until three years ago,” he says. “I usually book a big event like a wedding and then book more casual sessions, like say portraits of couples, around it.”

His photography gets busier every year, in line with the Detroit economy that’s slowly improving. Uribe remembers three years ago “all everyone seemed to talk about was the economic crisis. In San Ignacio we follow closely what’s happening in the USA. It impacts our daily lives, how we shop, and remittances.”

On this trip he notes that his clients seem more optimistic and that the Mexican community in Detroit is feeling the vibrancy of a new downtown and endless new development.

“I noted a genuine excitement about the way the Mexican community feels about Detroit,” he says.

Mexicans in Detroit care greatly for their adopted country, as much as San Ignacio and Mexico.

“Topophilia, to be sure, is not an either/or proposition," saya Bada. “It shows that it’s possible to love Detroit and its riverfront as much as the small towns where many Mexican immigrants were born.”