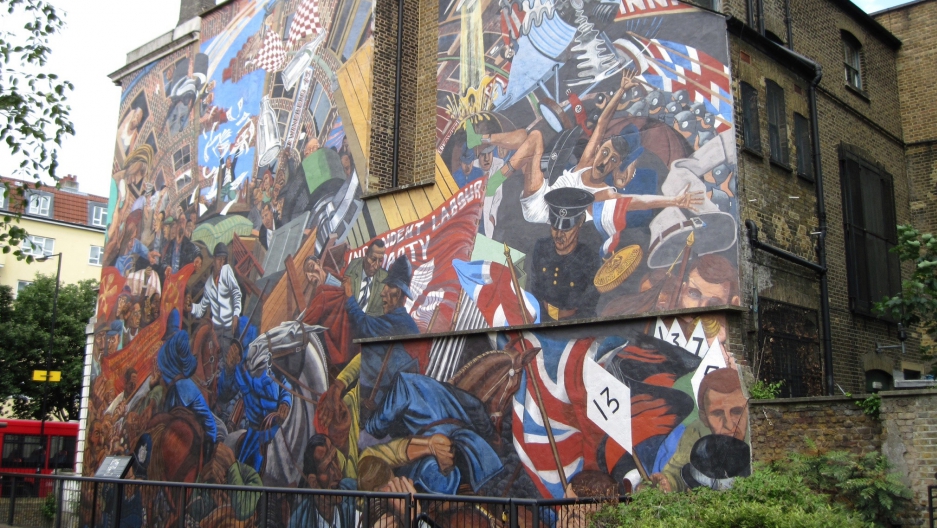 Eighty years ago, the East End of London saw one of the biggest riots in the city's history. It's known as the "Battle of Cable Street."

Tens of thousands of Londoners clashed with police after right-wing extremists attempted to march through the heart of the city's main Jewish neighborhood.

Many in the UK remember it as the day that fascism was defeated in Britain. But the truth is a lot more complicated.

In Britain, Oswald Mosley and his British Union of Fascists, the BUF, were riding a wave of anti-Semitism.

So when Mosley scheduled a mass march down Cable Street, the center of London's Jewish community, the locals decided to stop him. One participant, Morris Beckman, wrote that Jewish Londoners were "sick and ashamed of keeping their heads down."

Beattie Orwell was in that crowd, and still lives nearby: “I'm 99 years old and still going strong.”

“You see I'm Jewish so I belonged to the anti-Fascist group,” Orwell says. “I was only 19 years old. I couldn't dance so I went to all political meetings.”

"I was a party leader, a Communist, and still am,” he explains. “I was a runner. I knock at people's houses to get people to come into the struggle. The atmosphere was great."

What was great was that London's Jewish community for the first time saw many of their neighbors coming to their defense.

Bernard Kops was 10 years old. He told the BBC that his mother had taught him "there were only two types of people in the world: Jews and Jew-haters."

He says after Cable Street, "my mother and father really had to change their minds... and accept that others did come to help us out."

"And you could hear in this conglomeration of people, the chants, '1-2-3-4-5, we want Mosley, dead or alive,’” says Bill Fishman, another participant. “And all across there were these banners flying, and I remember them as though it was yesterday. I pushed my way through these banners. People were there, I can see them now, young and old, but mainly local people, consisting of Irish and Jewish working class. They'd come there to stop the Fascist invasion of our patch."

"There was a huge threat from the BUF and Oswald Mosley,” says Professor Clive Bloom, who has written extensively on riots in London, “and here we have people almost apparently at least spontaneously rising up, defending their area. They weren't getting justice from Parliament, from the government, from the police, so they took justice into their own hands. And in this case they won."

Some 10,000 police had been mobilized to keep order, and their first duty was to clear the streets for the Fascist marchers.

They stormed the people's barricades. Bill Fishman says everyone in the neighborhood had a role in the fighting.

"Kids were throwing marbles at the horses and they were collapsing on the floor,” he says. “There were women throwing filth and dirt and emptying garbage onto the police."

Everyone remembers those chamberpots being dumped from second story windows.

The police were stalled. They advised Mosley to call off the march and go home. And the Fascists turned and marched away.

But they did not go into the oblivion that London folk memory insists they did. The event has been mythologized by the hard left in Britain, who hold it up as a successful model of direct street action. But the truth is more complicated.

Mosley's propaganda exploited the publicity surrounding the Cable Street riot. The Fascists were usually denied publicity by the media, under pressure from the government. Mosley's people spun the violence to portray themselves as victims.

In fact, Fascist membership and anti-Semitic attacks surged in the aftermath of the riot, even among the working class of the East End. Just a week later, a violent anti-Jewish riot took place in those same streets — an event known as the Mile End pogrom.

"Mosley personally never turned up again directly in the East End,” says Bloom, “but his followers did. So no they weren't defeated, but they were taught a lesson."

Most historians now agree that the Battle of Cable Street did not defeat fascism and anti-Semitism in Britain, and in fact gave them a short term boost.

They say what really defeated the Fascists in Britain was their failure at the ballot box — they never became more than a fringe group. As one citizen wrote to his local paper after seeing a Fascist rally: "I came to the conclusion that Mosley was a political maniac, and that all decent English people must combine to kill his movement."

One journalist whose family witnessed the Battle of Cable Street and the Mile End pogrom is Oliver Kamm. In 2006 he wrote: "Mosley was a sinister and repugnant figure, all right, but his bombastic absurdity along with the vicious sectarianism of [his] extremist politics" never really resonated with most British people.

Whatever the historians think, locals like Beattie Orwell remain proud of the stand they took that day, 80 years ago.

"They shouted 'they shall not pass,' and they never passed,” she says. “That's why I was proud."