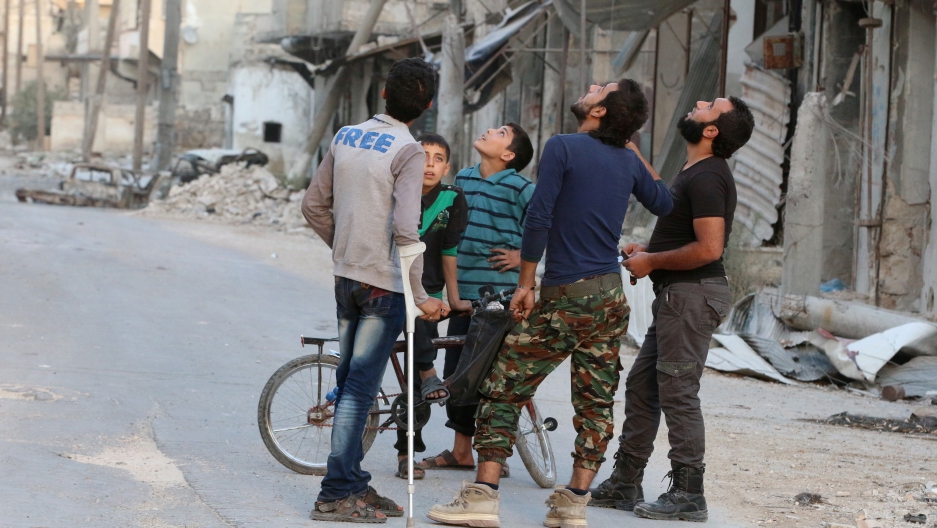 Residents scan the skies fearing an airstrike in the rebel-held al-Myassar neighborhood of Aleppo, Syria.

"Every hour, every half-hour I get up," he says. "Sometimes I can't get back to sleep because of the sounds of shelling, rockets. But I have to make sure that my wife is OK, that my daughter is OK."

The University of Aleppo English teacher can't shake his terror, even when his eyes are shut.

"Dreams now are problems for us. Rockets, bombs, the siege, Iraqi militia, Assad troops, they are trying to arrest us, kill us. These things come into our dreams," he says.

Al Hamdo lives in rebel-held eastern Aleppo with his wife and 7-month-old daughter. He still tries to go to work each day to teach. He ventures out even though most of the city's shops are now shuttered. On the shelves of the stores that remain open, he says he can only find products like cleaning supplies.

"When I go outside, I'm not sure that I'm going to see my wife and my daughter any more. It's so dangerous. But what can we do? We can't just stay at home and wait for death to come," he says. "We always try to forget the war, forget the killing, but just five minutes and directly we go back to the situation."

Tens of thousands of Aleppo's residents have been killed in the more than five-year-long war and large parts of the city have been reduced to rubble. Half of Aleppo's pre-war population, about a million people, have fled.

Al Hamdo says every trip outside of home he fears might be his last. His wife is especially tense when he departs.

"Always, she says, 'Please keep safe.' I told her, 'I can't. If the bomb is close to you, you die. If it's just farther, you live.' She says 'OK, just walk behind the walls when you hear the planes, just go into some buildings.' But she knows that I will not have time," he explains.

Syria's government has pledged to scale back air strikes and shelling in Aleppo, but Al Hamdo isn't optimistic. Still, he clings to the original ideals of the Arab Spring uprising.

"My father and mother told me always, 'Keep silent, my son, the walls have ears.' I should always be afraid. But I don't want that for my daughter and the next generation," he says. "We don't want them to feel as slaves."

The United Nations estimates some 275,000 people are trapped in eastern Aleppo. Al Hamdo says he expects many of the city's residents may perish. But he says he isn't interested in trying to find a way to escape the city, at least not yet.