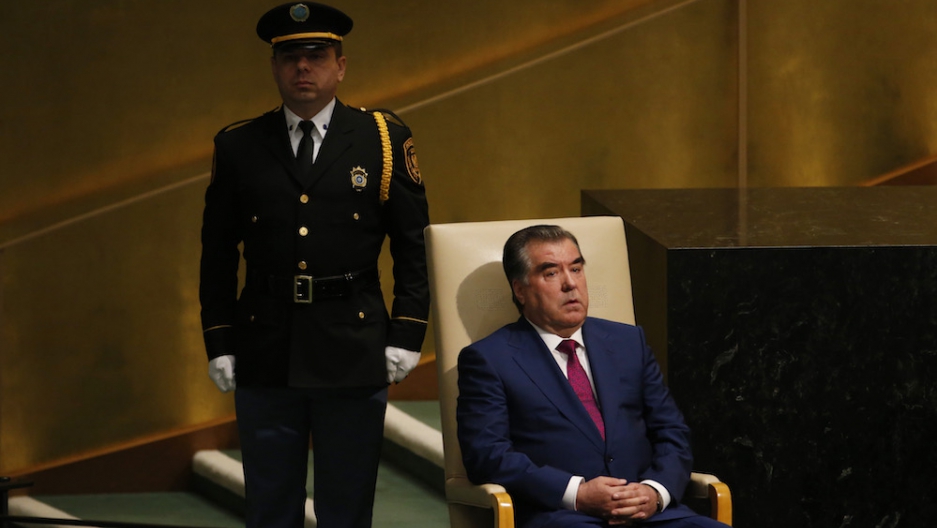 President Emomali Rahmon of Tajikistan is just one of Central Asia's leaders who won't have to worry about term or age limits.

Call it planning ahead: Turkmenistan, an isolated state in the desert of Central Asia, changed its constitution recently to scrap the maximum age limit for the country’s highest office.

The presidency already had no term limits. That means President Gurbanguly Berdimuhamedov, a 59-year-old former dentist, can effectively run for office as many times as he’d like without stressing out about turning 70.

Nearby Tajikistan had a similar idea earlier this year. Now, Tajik President Emomali Rahmon won’t have to worry about term limits after 94 percent of voters approved a wide-ranging referendum last May. That vote also lowered the minimum age requirement for office to 30 — quite convenient, given Rahmon’s 29-year-old son.

Not that there’s much political competition in either country. Home to some of the most authoritarian and personality-driven regimes in the world, Central Asia — once the Soviet Union’s political domain — is a place where elections are largely farcical and dissent is often brutally crushed.

In Turkmenistan, an energy-rich country, the state uses generous subsidies to buy the population’s obedience while subjecting it to a bizarre personality cult around Berdimuhamedov. In Tajikistan, the opposition has been systematically squeezed out as the country “increasingly resembles a one-party state,” according to US democracy watchdog Freedom House.

For the leaders of those countries, staying in office for life is just part of the deal. Their repressive policies at home keep the public silent, while their dabbling with democratic trappings — constitutions, elections, referendums — are meant to feign legitimacy, according to Central Asia researcher Luca Anceschi.

“It’s part of the narrative that these are transitional states, transiting from the Soviet Union into something else, obfuscating the fact that what we’ve really seen in the past 25 years is a descent into extreme authoritarianism,” says Anceschi, a lecturer in Central Asian studies at the University of Glasgow.

Even in death, the Central Asian autocrat is seemingly always around. At least that’s the case in Uzbekistan, where longtime, 78-year-old dictator Islam Karimov died last month. There, according to independent news outlet EurasiaNet, a “wave of myth-making” is currently underway aimed at glorifying the former leader.

Read our feature on #Uzbekistan after #Karimov. The fight for power is on: https://t.co/FZbpTq0bYT via @OCCRP pic.twitter.com/Cg7Rd2Hot7

But keeping a closed, highly personalized regime running also means worrying about eventual succession. “It’s virtually the only moment when everything is up for grabs,” Anceschi says.

Karimov’s death in Uzbekistan, for example, raised concern that a power struggle would destabilize the country, which also shares a border with Afghanistan. More than a few days went by before parliament approved an acting president, former Prime Minister Shavkat Mirziyoyev. He appears set to inherit Karimov’s seat with little trouble.

Kazakhstan, which has been ruled by 76-year-old Nursultan Nazarbayev since it gained independence in 1991, is up next. Central Asia experts point to the recent shuffling of several government officials into positions of influence as a sign that he’s starting to think about who might replace him.

Regardless of who ends up ruling in Kazakhstan — or in Turkmenistan or Tajikistan — chances are slim it would significantly change the region's stifling political landscape.