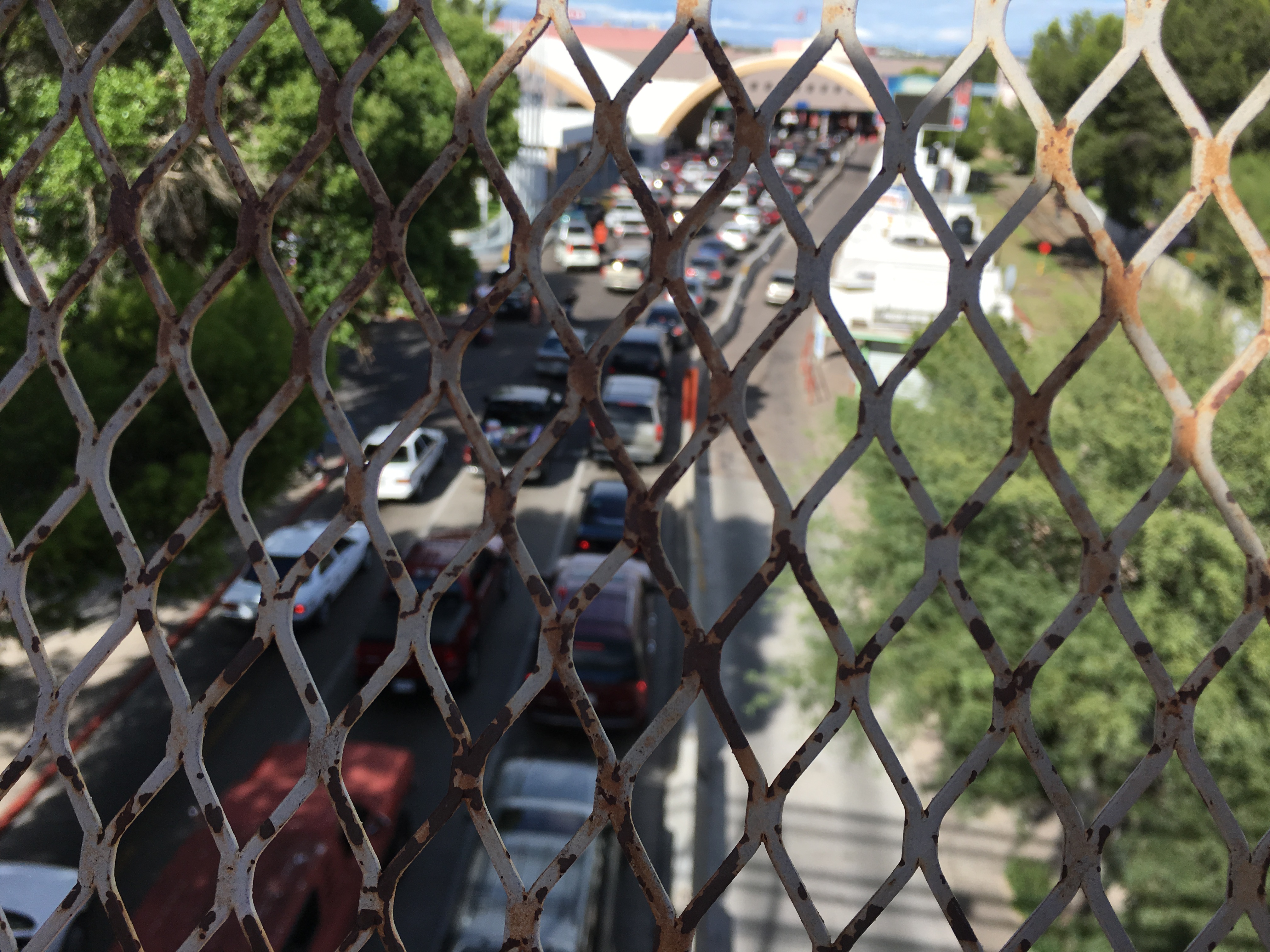 The view from an overhead pedestrian bridge in Nogales, Mexico, as traffic streams into the legal port of entry to Nogales, Arizona.

At the Tucson Border Patrol compound, there’s a sign out front that says they’re hiring. The parking lot is full and cars are crammed onto extra lawn space. The number of agents in this sector has more than doubled since 2000, to 4,200 agents covering 262 miles.

Activists say that’s the outcome of a US policy that has also resulted in deaths of migrants.

“Militarizing the border at the more common crossing places and intentionally pushing the flow of migration into the more isolated, desolate areas was an intentional strategy,” says Kat Rodriguez of the Colibrí Center for Human Rights, a nonprofit housed inside the Pima County Medical Examiner’s office in Tucson.

The Colibrí Center was created to work with families searching for missing loved ones. The staff collaborate with the forensic scientists working to identify the remains of people who've died during the harsh, treacherous crossing from Mexico to the US.

Last month the bodies of 21 people were recovered from the desert. Rodriguez, like many people in southern Arizona, is very aware the upcoming presidential election has the potential to drastically change the border policy. And border agent Daniel Hernandez says that’s how it should be.

He says that’s what he tells people when they try to talk to him about politics.

“We tell them, 'If you don't like the law then change it,'” Hernandez says. “We enforce the laws, but we're not the ones that create them."

More from the podcast

This story is part of an upcoming episode of Otherhood that will examine the situation along the border in southern Arizona. Subscribe to hear more.
Otherhood on iTunes

Hernandez’s parents are Mexican immigrants, and like many first- and second-generation Americans, he feels grateful to be a citizen, especially when he deals so frequently with people who don’t have the same fortune.

“I’m proud of my country and I serve my country, but I do recognize other people's struggles perhaps in other countries,” Hernandez says. “But at the same time, things are the way they are. I try to do the best in my community. I try not to think too too far out. It's a great country and everybody wants to come here but not everybody can, unfortunately. But that's the way things are. And I'm just grateful that I'm an American.”

Also: This rancher in Arizona doesn’t necessarily want a wall — but he does want more done along the border

Another agent in the Tucson office, Vicente Paco, was born in Mexico but inherited American citizenship through his father, a Californian who fought for the US in the Korean War. Like many families, Paco’s has moved back and forth over the border for generations.

“You know, to those who are over there and say we got lucky that we were brought over here, I don’t know. ... I can only speak of what happened,” Paco says. “There are opportunities in other places — it's just different and maybe maybe not as rewarding as there are in the United States. That's why you know this is the the the country where everybody wants to be and looks up to. And I will make sure that my kids understand that.” 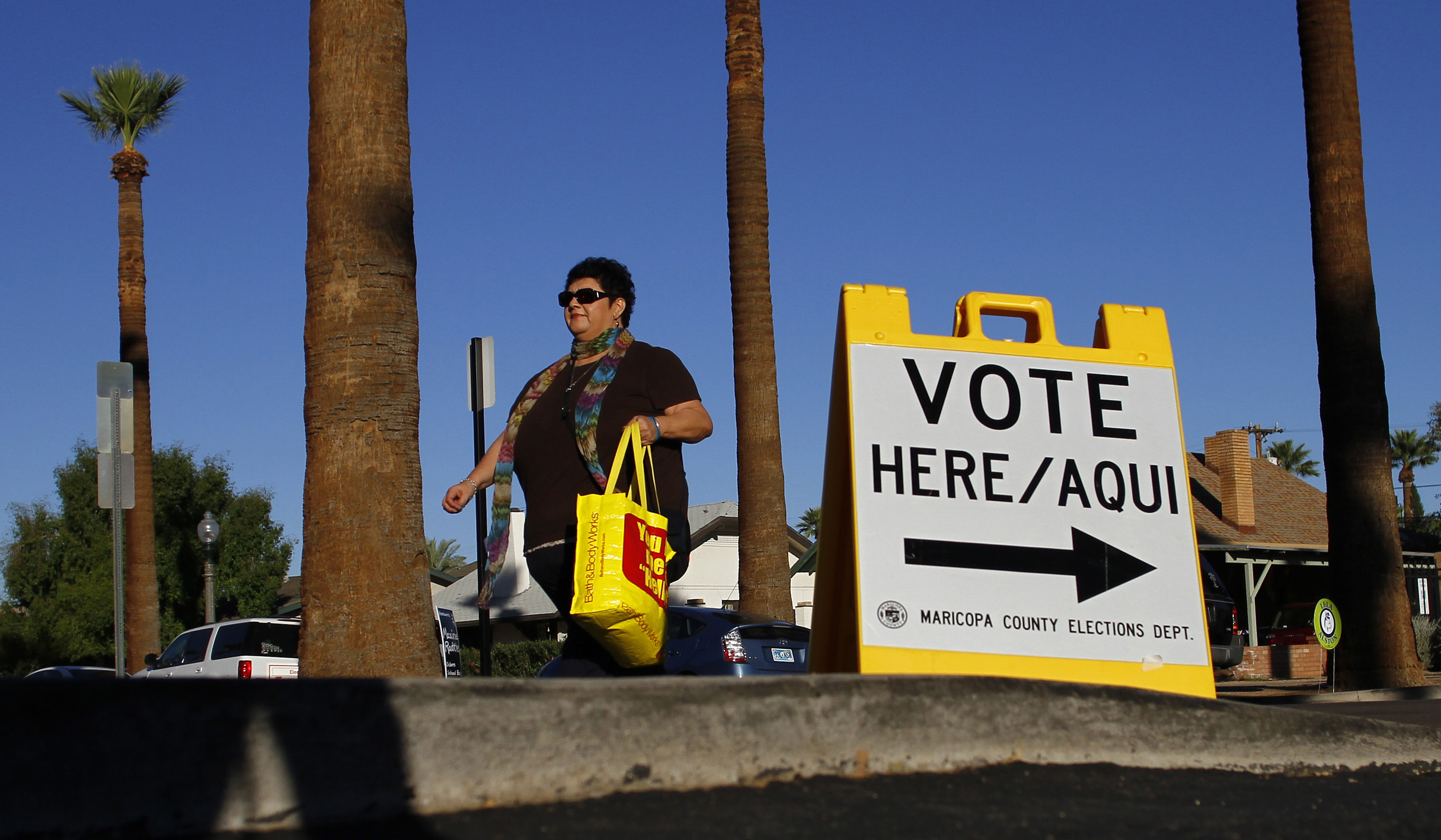 Paco has to walk a fine line. Some people in his own community just don’t like that he’s a border guard.

“I have family members or friends that I grew up with in the border town where I was raised. And I I tell them, you know, it's like it's another job. I swore to uphold the law and whatever the law is, you know, I'm going to enforce it,” he says. “I will do the job that I’m being paid to do by the American public.”

Part of that job is visiting local high schools to talk to students who cartels try to recruit to help smuggle drugs or people north. And it's the Hispanic youth who are the most susceptible, he says.

And when asked how he speaks to them without making them feel profiled, Hernandez says, “Well, the thing is, I'm one of those kids.”

Hernandez grew up in an Arizona border town, where he saw people who worked with the cartels get killed.

“I need more than two hands to count how many friends in high school were killed. I, through a different turn of events, would have maybe ended up on the wrong path. But I had good parents and I understood the risks involved,” he says. “So — is it a profiling? I don't believe so.”

It can be tough when public sentiment turns against border guards, like when the media runs stories about deaths of migrants trying to cross the desert from Mexico to the US.

Paco and Hernandez say it frustrates and saddens them when people risk their lives and break the law. Hernandez says all border agents can do when that happens is focus on the job, which often is to save the people who they find trying to cross.

Also: Fear of immigration raids? This Honduran woman says she would cross the border again.

“Sometimes we were seen as this entity that might be a little stern and harsh to some people, but we're not,” he says. “We're focused on humanitarian efforts because it's the right thing to do.”

But Rodriguez of the Colibrí Center says the fact the border patrol has to spend time and money saving people shows US policy isn’t working. People trying to reach the US aren’t deterred by the harsh journey across the desert.

So much so that it’s almost like the desert swallows up the bodies of those who die. Sometimes there are just small pieces of people left, like a fragment of a skull, that Rodriguez has to then send to families.

“We have to sit there on the phone and beg families, like, 'Don't open the box when it comes home to you.' That is probably the thing that makes me the most ashamed,” she says. “We straddle this place of the living and the dead because we're looking at a skull on one screen and a picture of this guy at his wedding on another. And you just can't reconcile that that person is not here any more.”

Rodriguez says she has a constant feeling that she’s trying to make up for something her government is doing, and it's not enough.

But border agents Paco and Hernandez say power over American border policy rests with those who’ve always had it: the American people.