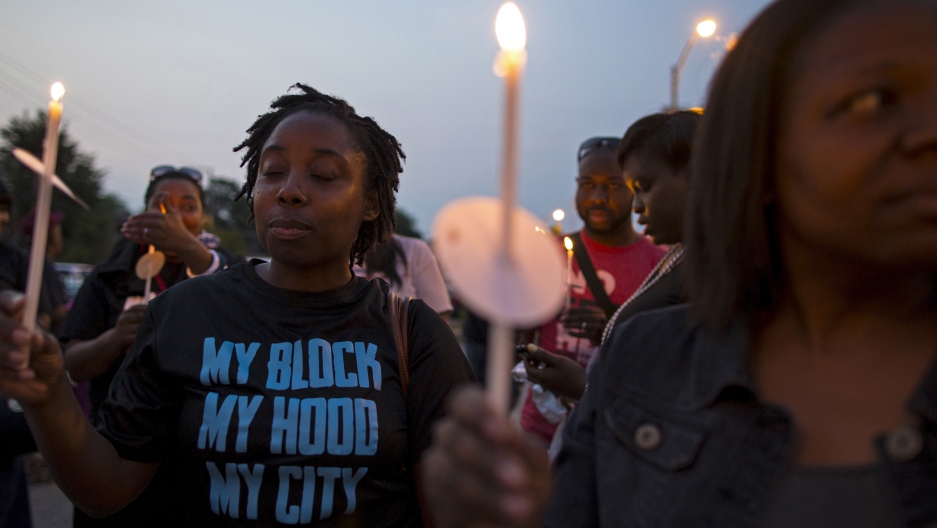 Residents of Chicago's Englewood neighborhood gather for a candlelight vigil against gun violence.

Every day, on average, seven children and teens are shot dead in the US.

That's the simple, tragic statistic that is the premise for Gary Younge's new book "Another Day in the Death of America."

The author picked a day at random: November 23, 2013. Ten American children and teens died in gunfire on that date. Younge set out to chronicle each of their stories.

That's how he learned about 16-year-old Edwin Rajo, a boisterous, almost silly kid in Houston's Lee High School. It's an under-resourced institution where Latino and African American gangs hold sway. Edwin's best friend Camilla was a gang member who bought a gun after her brother was shot. One evening, Camilla and Edwin began fooling around with the weapon.

"She takes the clip out and assumes that it's empty, holds it to his chest and pulls the trigger, not realizing there's one in the chamber," Younge says. "And she said to me, 'I didn't know anything about guns. I only knew that you shot guns, that's all. I thought that if the clip was out, that was it.' And so there's this moment where time cannot be turned back, and Edwin says, 'Dude, you shot me.' And she says, 'I'm sorry, dude.' And then Edwin's eyes roll back and Edwin's breathing his last breath."

Edwin's mother Marlyn was born in Honduras. She hid in the driver's cab of an 18-wheeler with eight other people to make her way to the US. Despite losing Edwin, her eldest son, she doesn't regret crossing the border.

"Her feeling was this could happen anywhere," Younge says. "She didn't blame America for it. And then when I interviewed her she was heavily pregnant. And she had a boy, and she called him Edwin."

No one has been punished for the elder Edwin Rajo's death.

Younge calls it paradoxical but says the lack of punishment, in this case, has led to more forgiveness. He notes, "Camilla went to Edwin's funeral. Her Facebook cover photo shows her sitting next to Edwin's grave all in black and surrounded by flowers and balloons, smoking what looks like a joint. 'His sister and brother are cool,'" Camilla tells the author. "'But every time I'm with them I know what happened. I feel bad because they don't have a brother no more. The only person I'm not cool with is his mom.'"

Social media is full of tributes to those youth who perished on that November day.

"Particularly Facebook and Twitter, for some of these kids, they're like online graveyards ... for teenagers surrounded by death in a way that would not be familiar to me beyond a war zone," Younge notes.

After spending two years chronicling the deaths, the author says he had two major realizations. The first was the recognition that the parents of every black child profiled had "factored in" the possibility that their child might be shot dead.

"Samuel Brightmon's mother in Dallas said, 'I didn't think it would be him, I thought it would be his brother,'" Younge recounts. "A father in Newark says, 'You wouldn't be doing your job properly if you didn't think that your son could be shot dead as a black father.'"

Finally, Younge says, the families of the 10 young victims aren't quick to blame guns for the loss of their children.

"I conclude that for some people in these areas, imagining a world without guns would be like if your child was run over, and you tried to imagine a world without traffic," he says. "At least with traffic, if you put up a stop sign or you wanted to put up a speed bump, no one would say it's unconstitutional."