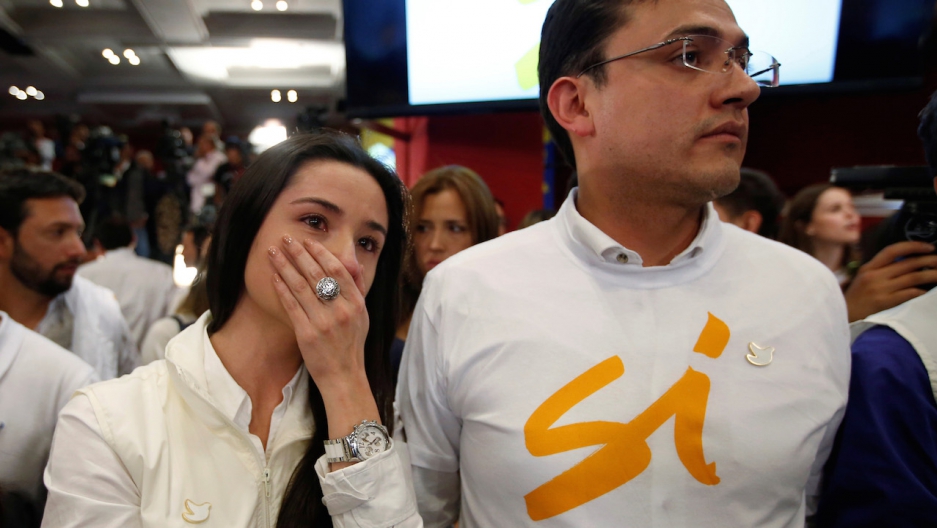 A supporter of the "Si" vote cries after Colombia narrowly voted "No" in a referendum on a peace deal between the government and the FARC rebels, at Bolivar Square in the capital, Bogota.

Colombian American reporter Luis Gallo voted in favor of the peace deal that was narrowly rejected in a Sunday referendum.

Speaking to PRI’s The World from Bogota, he didn't mince words. “I am a bit devastated to be honest with you,” he said of the decision. The peace agreement between the Revolutionary Armed Forces of Colombia (FARC) and the government took four years to negotiate, and would have officially ended 52 years of conflict.

“I was 100 percent sure I wanted a new chapter in Colombian history,” Gallo said of his vote supporting the accord. “I was ready to come to terms with the FARC for killing my father, and me forgiving them. In a sense, I made peace with it.”

But clearly many other Colombians hadn't made peace with the deal. Gallo's own family was divided over how to vote. When we first spoke to him last week, his mother and most of his aunts and uncles were considering voting "no," while he and his cousins planned to vote "yes."

Gallo believed in the settlement even though his own father had fallen victim to the FARC. His father was prominent in the national police in the 1980s, and in the early 1990s while he was working for an oil company, he happened to be captured by FARC rebels. He was identified, "tried" and then "executed." Luis Gallo was just 6 years old at the time.

There was a strong "no" campaign heading into the weekend referendum, but the historic deal was expected to pass by a wide margin.

Instead, only 37 percent of eligible voters showed up to cast ballots. The "no" camp won by a razor-thin margin with 50.21 percent of the vote.

The Colombian government and FARC rebels were scrambling Monday to save the deal. The government's chief peace negotiator offered his resignation, while the rebels said the referendum result left them "much more committed" to peace.

But the outcome left no clear way forward to end a half-century conflict that has claimed an estimated 260,000 lives.

“Everybody is disoriented,” Gallo said. “As the results were coming in, I was here with my family — some who voted ‘yes’ and some who voted ‘no.’ Everybody was just looking at each other in shock. We didn’t know what it actually meant.”

“It was that type of feeling, like, oh my God, what have we done?”

Immediate tensions eased Sunday night after President Juan Manuel Santos announced that a ceasefire with the FARC was still in effect. "I will continue to seek peace to the last day of my term," he said.