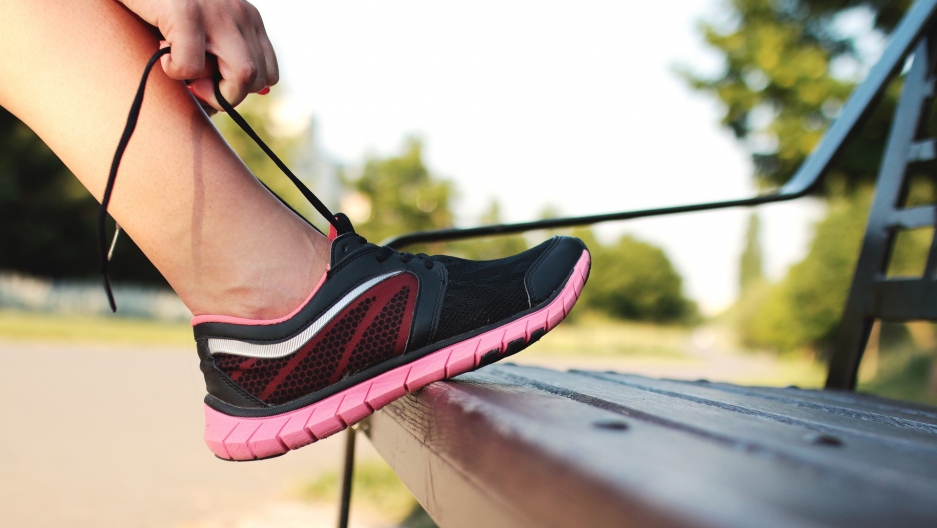 Working out isn’t everyone’s idea of a good time. But would you run a little faster if a pack of zombies were breathing down your neck on your morning jog? (Figuratively.)

An app called “Zombies, Run!” can help. And other app developers and device makers are also making bets on the best way to “gamify” your fitness routine. Fitbit’s bracelet buzzes with encouragement when you reach your step goal. Apps like Runkeeper and Strava let you log your miles, see how you stack up against your friends, and even compete against total strangers.

But do we really need a brush with un-death to get us into our running shoes?

Perhaps not, but the story — and other game elements — can keep things exciting when we do lace up. Margaret Wallace, CEO of the game development company Playmatics, calls “Zombies, Run!” a “milestone” application of narrative to fitness.

“It encourages me and keeps me active and not necessarily focused on how hard my run is,” Wallace says. “It's attempting to immerse me in a story. A lot of us ... are very tuned into what it means to be chased by zombies.”

Meanwhile, Wallace notes other runaway hits in gamified fitness may not have even been designed as such.

“It's remarkable the extent to which Pokémon Go created such a movement,” Wallace says. “I mean literally a movement of people, and I don’t know if that was an intended feature. That's what we call in gaming an ‘emergent feature’ — something that we may not have necessarily anticipated when we made a game, but something that came out of it naturally, because it's how the community likes to use it.”

But someone who’s simply interested in taking a walk around the block to hunt Pokémon, for instance, may not be motivated by an app that pits strangers together in a race against the clock. As the gamified fitness industry booms, Wallace says more apps and devices are finding ways to accommodate different types of players.

“Something that Fitbit has done that I think is really smart, is they've rolled out Adventures, which are these solo, non-competitive experiences where you can walk and experience what it might be to be on a trail in Yosemite,” Wallace says. “But they also have Challenges, which can incorporate up to 10 of your friends. And so if I'm more of that competitive type of player, I have that option.”

With companies rushing to create even more tailored, engaging activity trackers, some consumers are concerned about what’s happening to their personal and location data. Wallace cautions that the standards for how data are handled are evolving with the field.

“To really get down into how each company handles the data, you would really have to look at their terms and services, and maybe even follow up with customer service,” Wallace notes. And for users who take the same jog every Friday evening and post their times to Facebook, for example, “there are certainly privacy implications,” she says.

While some people may not feel comfortable sharing details of their workouts across social media, Wallace says other people do — and can gain from doing so.

“For a lot of us, we may not feel comfortable with sharing ‘Hey, today I only did 5,000 of my 10,000 steps. I blew it. I didn't make my goal,’” Wallace says. “But I think that there are ways, again — the Fitbit challenges allow you to customize. I want these 10 of my friends, or these five of my friends to work with me together on this goal. And I think that has more benefits than negatives in the long run.”

And whether we choose to spice up our workouts with a simulated hike in Yosemite or not, we’re probably already encountering gamification elsewhere in our daily lives. Wallace, whose background is in video game development, sees gamification design elements in everything from new hiring processes at big companies, to how some of our car insurance rates are calculated.

“We're seeing financial institutions use this,” Wallace says. “We're seeing HR departments use it for looking for skilled employees in different areas. We are seeing it built into hardware, so certain automobiles will have different game-like elements in their dashboard to show you how fuel friendly ... you're being with your driving. Insurance companies are starting to utilize this with their apps to show whether a driver has been compliant and is eligible for less expensive insurance. It's really taking over in terms of a design approach in a lot of areas.”