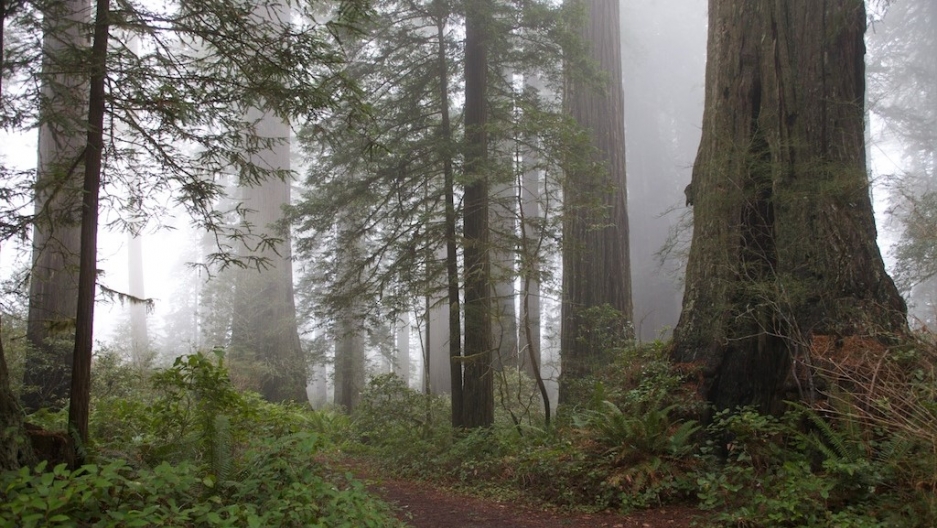 Fog among the redwoods in the Lady Bird Johnson Grove of California’s Redwood National Forest.

California’s towering redwood trees are iconic symbols of its coastline — and so is the low, rolling fog that often blankets Route 1. And as it turns out, the two are linked in more than just imagery: The fog plays an important role in keeping the redwoods hydrated and healthy. It’s also giving us clues about how the trees might respond to more drastic climate changes.

For one, the fog helps blanket the redwoods in moisture. Todd Dawson, a professor of integrative biology at the University of California, Berkeley, says that when the air in California’s Central Valley heats up, it pulls in fog banks from the ocean.

“They come during the summer months where we don't have any rainfall here in California during our Mediterranean climate,” Dawson says. “And not only do they bring water when they come in off the ocean, they also bring other nutrients that are kind of dissolved in the fog.”

According to Dawson, redwoods can absorb fog through their roots, but also directly through their leaves. And the fog is particularly good as a source of nitrogen, which acts as a fertilizer. The nutrient mix brought in by summer fog is so unique that Dawson’s team has been able to identify in tree ring samples when a tree was fed by fog or rain.

“It was one of the coolest things,” Dawson says. “When we got some tree cores out of these trees, and we analyzed actually different parts of the single year’s worth of growth, we could see in the cellulose that’s being made by that tree a signature of either winter rainfall at one part of the year, or summer fog during the other time of the year.”

The findings mean that scientists have a trove of tree ring “signatures” detailing the relationship between drought, rain and fog, stretching back millennia. (The oldest coastal redwood tree is more than 2,500 years old, according to Dawson.)

But observations from even the past few decades of climate change are leading to new hypotheses about how redwoods respond to drought. In California’s fifth dry year, the coastal redwoods are still growing — and at a faster-than-usual rate. But Dawson says their growth may actually be linked to a decades-long tapering in the amount of fog rolling in over the California coast.

“One of the hypotheses that's out there that needs to be further tested is that as the fog has actually declined over the last 60, 70 years, the light has actually increased,” Dawson says. “And it may be that these trees are growing more because there is actually more light for them to grow on because that's what photosynthesis actually requires.”

Dawson notes that in the southern part of California, where there’s less rain, less fog, and it’s already hotter overall, the redwoods aren’t growing any faster than usual. And up in the Sierra Nevada mountains, the giant sequoias, cousins to the redwood, are feeling the drought most of all.

“That's largely because not only has it come with warmer temperatures, but it's come with a lower snowpack,” Dawson says. “And that snowpack is really very important to the giant sequoia. And when they don't have it, they don't get the groundwater recharged. You contrast that to the coastal redwoods, and they have still been getting that summer fog, and so they don't seem to be as affected by this current drought as the trees that are growing up in the mountains.”

Coastal or not, the redwoods’ plight in California’s current drought has Dawson scrambling to envision their future. He’s seen climate change models suggesting that California will continue to get warmer, and rainfall patterns will change — particularly the proportions of moisture arriving in rain versus snow.

“Are they going to be able to keep growing?” Dawson wonders. “Will their ranges shrink? How will seedling recruitment and forest structure change as we march into a climate change future?”