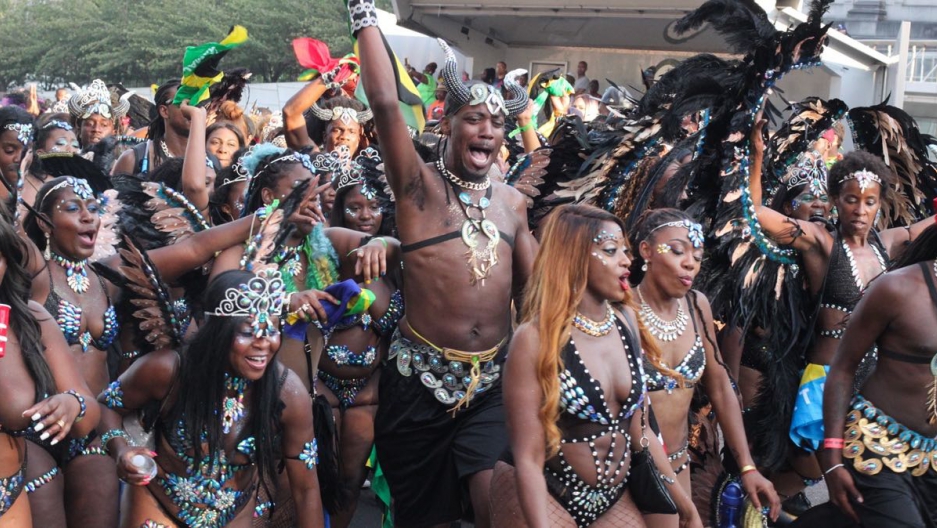 Carnival's festivities include the West Indian American Day parade, a colorful spectacle with plenty of history.

"Just for a few hours, nothing matters,” says Aisha Carr, director of Sesame Flyers, a prominent mas band in Brooklyn, New York. “When you hear that music, and you’re in your costume, you don't care how it fits — you’re carefree.”

But long before the dazzling, carefree festivities begin, planners and participants spend many months preparing. It can be taxing, both monetarily and emotionally.

Steel pan groups, for example, are struggling more than ever to find rehearsal space to accommodate their mas bands of 50 to 100 players. For months, steel pan groups rehearse every night in preparation for their big Carnival moment: Panorama, the annual steel-band competition that takes place the Saturday before Labor Day.

“Back in the day it was easy to just grab a piece of open property, and set your band up and nobody bothered you," says Tameeka Garcia-Harris, manager of Steel-X-Plosion, a Brooklyn-based steel band. “Things are changing, gentrification is going on in Brooklyn, and it's becoming more and more difficult to find property and places to practice. And the pricing ... $7,000 a month for a piece of land. So it’s just been a difficult year.”

Steel pan groups also struggle with police increasingly enforcing noise ordinances that limit their rehearsal times in residential areas, plus laws that prevent groups from selling food or alcohol without a license. In the past, their sales helped cover expenses.

“It averages about $15,000 to bring out a Panorama [group],” says Garcia-Harris. “And the prize money, if you win, is only 20 grand, so you’re not really coming out in the positive, right?”

But the love of steel pan keeps Garcia-Harris and the entire New York steel pan community going, despite the challenges.

“Every year I say I’m not going to do it, and it becomes like this bittersweet relationship, but I end up doing it. They call it the ‘pan-jumbie’ or the ‘pan bug.' ... As the summer starts to come in, and the spring flowers start to rise, you go ... 'I think the band’s coming out again next year.’ You know, but ... You have to love it.”

At 5 a.m. on Labor Day, as the sun is just coming up, the streets of Central Brooklyn are full of hundreds of thousands of revelers who have been partying all night long. It is a wild, magical moment, unlike any other morning in New York City: groups of youth who are in costumes called "jab jab" roam the streets dressed as devils with chains and whips, while older people shimmy in frilly masquerade costumes of the colonial era.

The revelers, covered in paint, tar and powder, drink rum and dance to the music of raucous acoustic bands: Haitian "rara" groups and brass bands on foot, and hot rhythm bands and steel pan pulled by small trucks.

This is J’Ouvert, the unruly, predawn bacchanal that marks the unofficial opening of Carnival in Brooklyn, with a history that goes back to the origins of Caribbean Carnival itself. The word J’Ouvert comes from two French words, "Jour Ouvert," meaning daybreak in Creole, but this celebration actually begins around midnight of the Sunday before Labor Day and continues well into the morning. It has roots in a harvest festival called Canboulay (from the French Cannes Brulées) in 18th-century Trinidad, which commemorated the backbreaking harvests slaves went through when a cane field caught fire. After emancipation in 1838, former slaves and indentured servants merged Canboulay with the European masquerade traditions of the Pre-Lenten Carnival. Their alternative Carnival was a defiant celebration of freedom with crowds of Afro-Creole people drumming, singing "kaiso" — which evolved into calypso — and dancing in the streets.

When the British tried to ban Canboulay in the 1880s, Port of Spain erupted in riots, forcing the police to retreat. However, the government did manage to ban drumming at Canboulay. The result? The invention of steel pan drums from oil barrels.

“I love J’Ouvert! J’Ouvert is crazy!” says Garcia-Harris, “You got the rhythm, you got the iron, it’s not as stringent, you don't have to worry about all these rigid rules, it’s just anything goes. And that’s the closest to Trinidad pan you’re going to get, right now, is J’Ouvert morning. The powder, the mud, just everything. ... You have to experience it.”

However, J’Ouvert has been under intense political pressure in recent years, stemming from violence that occurred along the parade route. In 2015, a man named Carey Gabay, a lawyer who had worked for New York Governor Andrew Cuomo, was caught in the crossfire of a gang-related shooting on Bedford Avenue, and he later died. Another man was also stabbed to death that night. So, the police department doubled their numbers at J’Ouvert in 2016, put up 200 light towers along the route and mounted posters around the neighborhood in the preceding days, with the blunt message: “Don’t shoot anyone, don’t stab anyone.” Despite the overwhelming police presence, Tiarah Poyau, 22, and Tyreke Borel, 17, were shot to death along the parade route.

Since then, much of the press has been overwhelmingly negative, painting the entire J’Ouvert experience as violent, and some local politicians have called for J’Ouvert to be canceled. “Really the concept of canceling it or continuing it is really a complex matter,” says Laurie Cumbo, a city council member. “Because you have an event that has gone unsanctioned for over two decades without permission. How do you cancel an unsanctioned event where over 250,000 people are attendance?”

New York Mayor Bill de Blasio recently ruled out canceling J’Ouvert, saying, “We have to find out a way to make it safer.” In Cumbo's view, the violence around J’Ouvert is part of a larger problem, and the Caribbean community should not be faulted.

“The media gives the impression that Brooklyn is a violence-free, gun-free borough that enjoys a utopia of sorts in the summer. Then all of a sudden, the Caribbean community gets together, and there is a violent incident that happens every year. When in reality, there's an incident of gun violence happens every weekend, whether there is a pre-Labor Day activity or there is not a pre-Labor Day activity. We have a gun epidemic in the city of New York. This is a very serious situation with gun violence in our community," councilwoman Cumbo says.

For her, the significance of Carnival goes far beyond simply having a good time: “For our communities, which are people of African descent, we have gone through over five centuries of colonization, a transatlantic slave trade, and a decimation of our entire culture. There are so many social ills that still ravage our community, that has to be also be thought of and taken into account when we are thinking about opportunities for celebration.”

Despite the many challenges facing the Caribbean community in New York, have no doubt that Carnival in Brooklyn will continue and grow in years to come as outsiders join in the parade and J’Ouvert and steel pan groups lobby the city for status as cultural institutions.

“We’re meeting with a lot of politicians, so we can try to brighten this back up to how it used to be,” says Garcia-Harris, the manager of Steel-X-Plosion. “We’re hoping we can work on these space issues. Maybe they can put us in Prospect Park somewhere, have the bands rehearsing in different areas of the park. As a pan community, we’re working on where we can move this, to get it somewhere where we can all have a good time.”

This story is based on an episode of Afropop Closeups, a new podcast from Afropop Worldwide, a PRI-distributed radio program that has shared stories and music from Africa and across the African diaspora for the past 27 years. In Afropop Closeups, producers are giving voice to musicians, scholars and people across the world who are responding to extreme situations including violence, war and cultural oppression. Listen on Soundcloud, or on the Afropop Worldwide podcast feed.