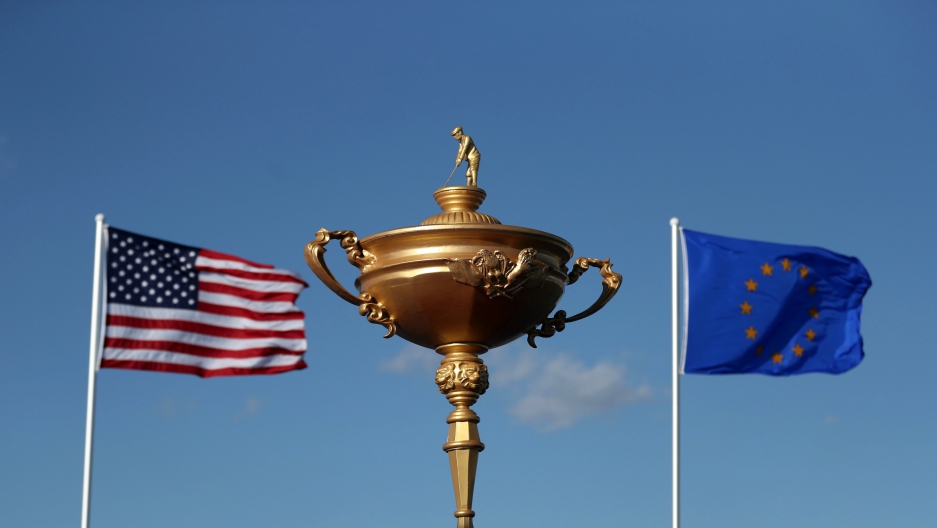 A giant version of the Ryder Cup trophy is flanked by Team USA and Team Europe flags at Hazeltine National Golf Club.

I'm not a big fan of golf, but I couldn't be more excited to go to the Ryder Cup in Minneapolis, Minnesota, with my dad this weekend.

Golf played a big part of my childhood. On Sundays, we'd often go over to my grandparents' house for dinner. After our meal was done, I'd lay on the floor while my dad and my grandpa watched golf on TV. All kinds of golf. Hours of golf.

For the most part, I entertained myself, rolling around on the carpet while the game played on. The Phoenix Open, the Nestle Invitational, the Buick Classic. Fred Couples, Davis Love III, Greg Norman. Tournaments and players that whirled past me amid a sea of green grass.

But one tournament, in particular, stands out in my memory — the Ryder Cup. I grew up in a suburb of Kansas City, and in 1993, my hometown's native son, Tom Watson, led the US Ryder Cup team to a victory over Team Europe in perhaps the only golf event that could be called really good TV. Best ball competitions, match play — it was entirely different from any other golf tournament, and I thought it was great.

So, when I found out (almost two years ago) the Ryder Cup was coming to my town, I eagerly set out to get tickets with my dad. Last year, we entered the requisite lottery, and my dad won. We were able to get tickets for the day of our choosing — and that day is Friday.

The Ryder Cup is unlike typical golf tournaments. It happens only every other year, and it alternates between the US and Europe. It's Team USA versus Team Europe, with players' individual performance contributing to the team's score.

Actual match play starts Friday and runs through Sunday. Some 250,000 people are expected to turn out for the various events this week, including tens of thousands of golf enthusiasts from overseas. My dad is coming into town from St. Louis, Missouri, just for the occasion.

Of course, with this being 2016, terrorism is a major concern for organizers.

“This is one of the three biggest sporting events in the world, and it’s my duty to make sure everyone there and everyone in the community is safe,” Chaska Police Chief Scott Knight told the St. Paul Pioneer Press. “It’s the Olympics, soccer World Cup and the Ryder Cup. They’re almost equal in terms of how many people they reach around the world.”

It's not unheard of. The Ryder Cup used to be played in odd-numbered years, but in 2001, just weeks after 9/11, Team USA asked for the event to be postponed for a year, out of concern for team safety.

This year the game will go on, but with some strict rules. No cars, bikes or pedestrians will be allowed anywhere near the golf course. That includes residents of several neighborhoods around the golf course; they won't be able to venture out unless they're in a vehicle with a special permit.

No dog walking or strolling around the vicinity, so police can easily swoop in on pedestrians/would-be terrorists.

So, my dad and I are jumping on the bus. It's a bit of a haul, but we're still pumped. The event tees off at 7:30 a.m. on Friday, and the two of us will be glued to the action — just like we were in 1993 when Tom Watson brought Team USA a historic victory.

We'll be wearing the red, white and blue.