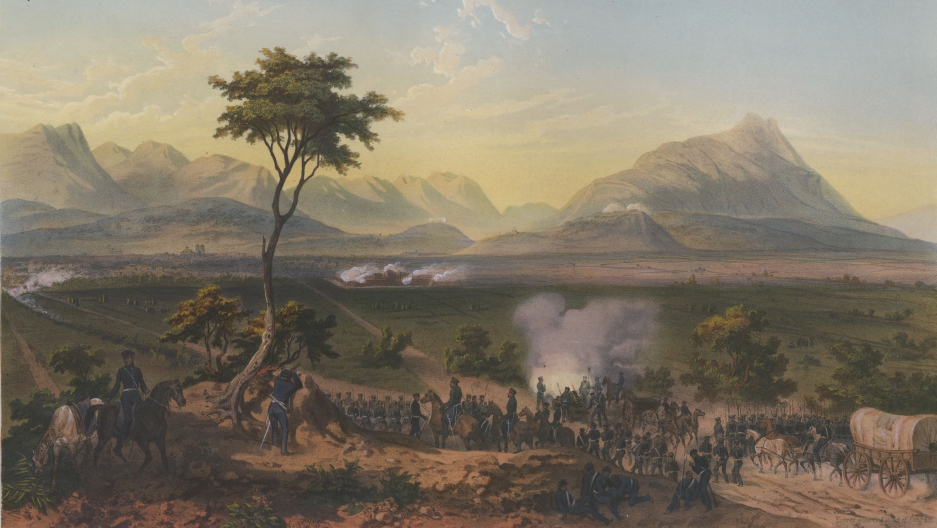 Pictured are US troops marching on Monterrey in this painting by Adolphe Jean-Baptiste Bayot after a drawing from Carl Nebel.

It’s sadly an all-too-familiar sight: the remains of fallen US soldiers arriving back in the United States. The difference for these men is that it’s been 170 years since they lost their lives.

The remains of several US soldiers killed in the Mexican-American War were received Wednesday at Dover Air Force Base in Delaware with the usual military honors. They were able to come home from Mexico thanks to years of diplomatic negotiations and detective work by scientists and historians at Middle Tennessee State University in Murfreesboro, Tennessee.

It's not clear exactly how many remains were repatriated, but the number is believed to be between 11 and 13. At least some of those men are thought to have hailed from Tennessee — the Volunteer State.

Thirty-five Tennesseans died in the battle of Monterrey in late September 1846. Monterrey was a brutal three-day slugfest fought in the early months of the Mexican-American War. It was one of the bloodiest battles of the war for Americans, with 531 men reported killed, wounded or missing. Mexico suffered 367 casualties.

Some of the toughest fighting during the battle was for control of an old tannery that had been fortified by Mexican troops trying to hold off the US invaders. US regular troops, together with volunteers from Mississippi and Tennessee, ended up winning control of the tannery — but at a heavy cost.

The dead were buried nearby. And there they lay until a building project uncovered some of their remains in 1996. More have been found since.

Coins and buttons quickly showed the remains included Americans. But Mexico held up the repatriation of the bodies, anxious to ensure that remains of Mexican soldiers weren't accidentally taken away, too.

The Tennesseans were all volunteers. Just a few weeks before the battle, they'd been laboring on their farms and in workshops in central Tennessee. After the War Department called on the states for help, thousands volunteered and were quickly shipped down to New Orleans and across the Gulf to join the Army on the Rio Grande.

The scientists at MTSU hope the remains will shed light on the lives of ordinary men in the 1840s. Bones can reveal a lot about the type of life a person enjoyed or endured: the rigors of life, their diet and overall health. They can also reveal the wounds they suffered, and how they were treated.

In that sense, we can know a lot about these soldiers. But we may never know their identities.

The lead MTSU scientist on the case, Hugh Berryman, says the chances of matching the remains with the names of the fallen are very remote. But his colleague Derek Frisby is trying to collect as much documentation as possible about the battle to help identify the soldiers involved. He’s appealing to the public for help, asking that anyone with relevant diaries or letters or other documents from the time, to contact him at derek.frisby@mtsu.edu.

Once the MTSU scientists have completed their research, the remains will be reinterred with full military honors.