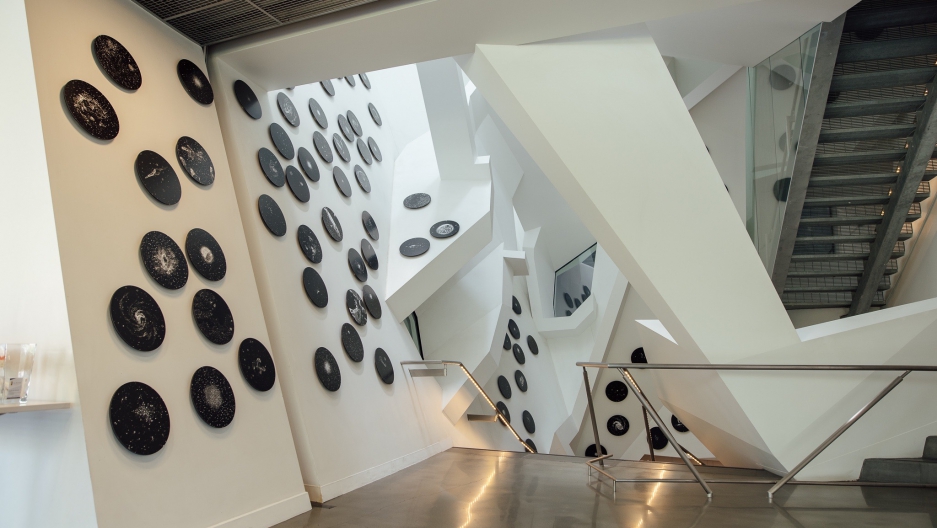 "Deep Sky Companion" at the Cahill Center for Astronomy and Astrophysics.

For her latest exhibition, called “Deep Sky Companion,” artist Lia Halloran was inspired not by the accomplishments, but by the frustrations, of a celebrated astronomer.

Charles Messier was an 18th-century Frenchman who became known in his lifetime for meticulously recording a catalog of 110 celestial features found in the night sky. The thing is, he considered those features distractions from his main pursuit: comets.

“In those days, the way [astronomers] got really famous was if you discovered a comet — you would get it named after you. And England and France were competing over whose astronomers could find the most comets,” says E. Sterl Phinney, a professor of theoretical astrophysics at the California Institute of Technology (Caltech), where Halloran’s exhibit is on display. Messier thought finding a comet would help him secure a respectable job in astronomy, Phinney says.

In 1758, Messier was working under the tutelage of a French Navy astronomer, trying to locate a comet that had been predicted to return to Earth’s sky, when he came upon a bright patch of light in the constellation Taurus. Messier noticed that the patch wasn’t moving, as comets do, but he recorded it in his notebook anyway, seemingly frustrated that it wasn’t what he was looking for. 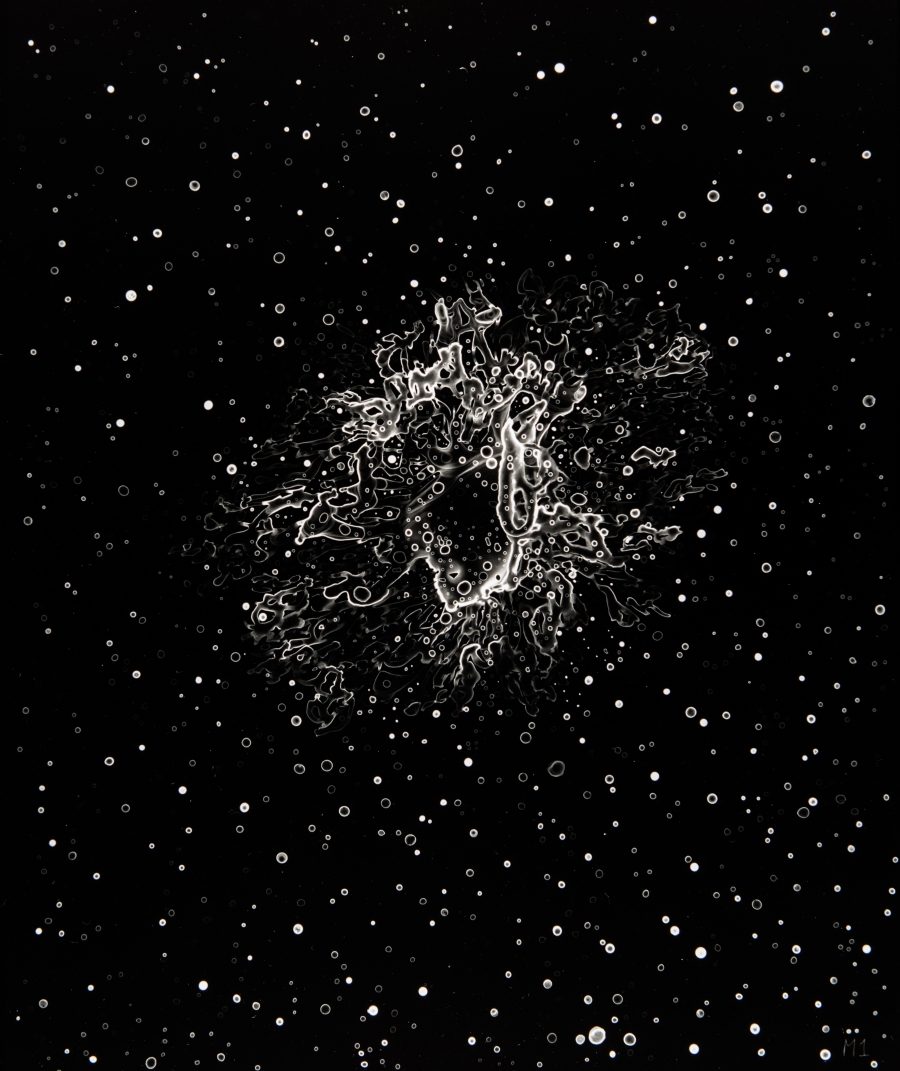 As he continued to search the sky over time, Messier encountered more and more cosmic interruptions, cataloging them, for all intents and purposes, as “objects to avoid while looking for comets.” The list grew to include a number of nebulae, galaxies, supernovas, and other astronomical formations—some that had been previously discovered by others, and some that Messier was the first to officially record. 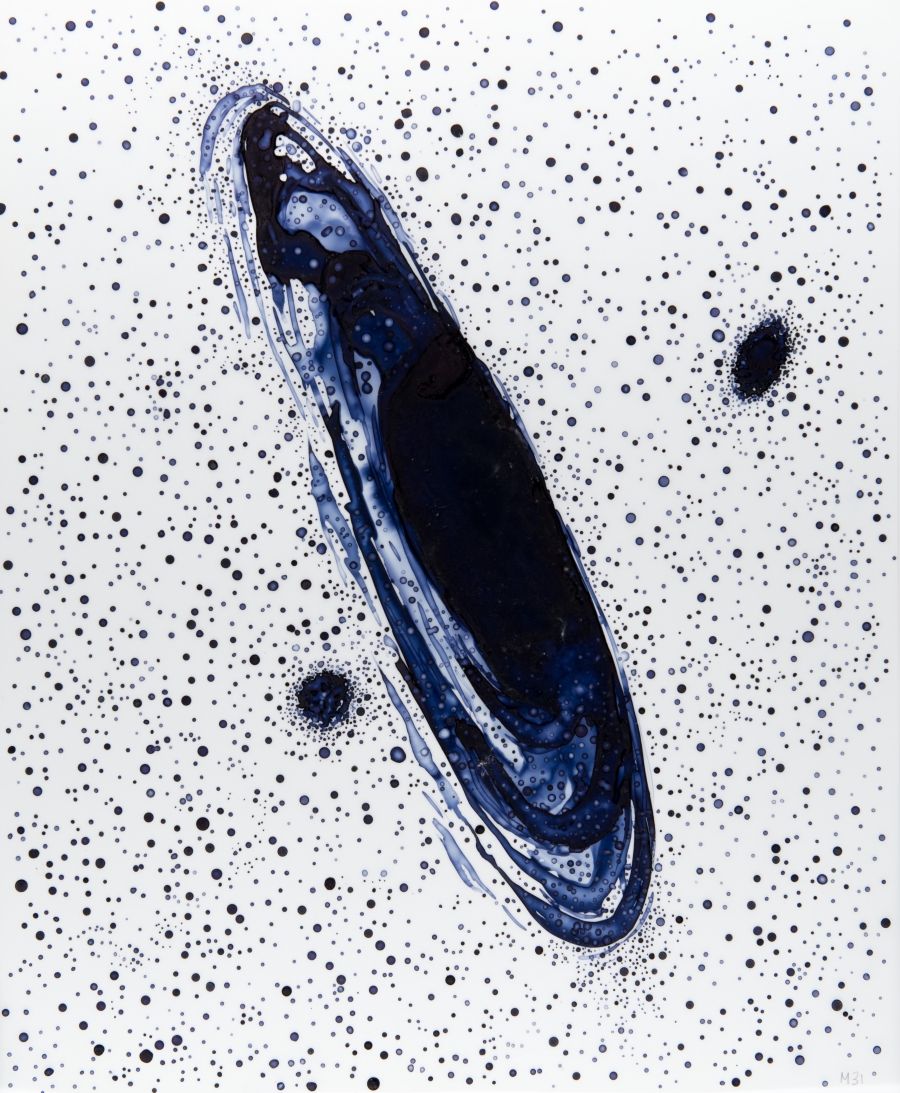 For Messier, cataloguing these features was simply a timesaving technique in the greater search for comets, according to Phinney.

“If you had a catalog of fuzzy things in the sky that you’d already checked didn’t move, you could avoid wasting time re-observing fuzzy things that were already known not to be moving comets,” he says.

By 1781, Messier had completed a final record of coordinates, descriptions and some drawings for 103 non-comets that was later published in the annual astronomical publication Connaissance des Temps. His catalog eventually became known as “Messier’s objects.” (Seven more objects were added posthumously when they were discovered in his notebooks, bringing the total to 110.)

Scholars recognized Messier’s work for being reliable — even if others had discovered a celestial object, for example, Messier would double-check the coordinates when including it in his own lists.

While the catalog didn’t explain much about the objects beyond their location and layman’s descriptions, it remains an important touchstone for many astronomers even today, says Phinney. “Messier was the first guy to make a good catalog of the stuff people could discover with a telescope,” he says.

And his catalog included a number of bright astronomical objects that are still widely studied. That first patch of light Messier recorded is the Crab Nebula, also known as M1 (for Messier 1). Messier also recorded the Eagle Nebula (M16) and the Andromeda Galaxy (M31). 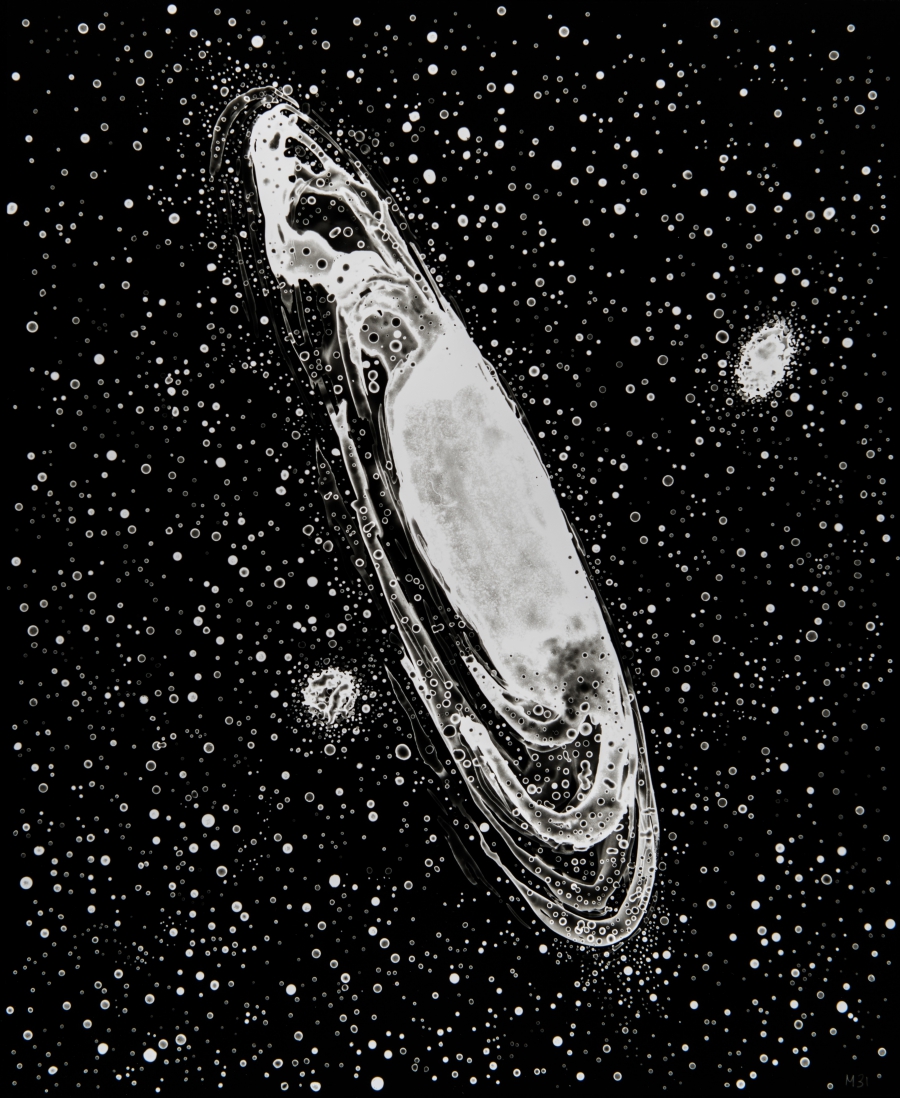 Lia Halloran, who is also an art professor at Chapman University, wanted to evoke the spirit of diligent observation that Messier’s catalog represents. For “Deep Sky Companion,” showing through December 18 at Caltech’s Cahill Center for Astronomy and Astrophysics, she made a series of paintings and prints based on Messier’s 110 objects.

As part of her research, Halloran compared Messier’s drawings and descriptions to modern photographs of the objects from NASA and other sources. Halloran painted each object using blue ink on semi-transparent, drafting film with a plastic feel to it.

She took the paintings into a dark room and imprinted them onto photosensitive paper, which she exposed to light to create photograph-like prints. The final prints, which are black and white, are essentially mirror images of the paintings, though sometimes certain features are more prominent.

Halloran sees her artistic process as “a nice mediator of the history and lineage of the rise of astronomy.” Before photography was invented, she explains, astronomers like Messier first relied on hand-drawn records of their observations. They later turned to glass plates coated with a light-sensitive emulsion to “print” the images they saw in their telescopes.

For the exhibition at Caltech, Halloran’s prints were cut into circles to represent the view seen through a telescope, and they’re arranged in a way that invites the eye to wander. The Cahill Center’s walls and ceilings are slanted and abstractly arranged, and Halloran took advantage of the striking architecture by placing some prints in obscured areas so that visitors might peek at a particular galaxy from afar, in the way that a person searching the night sky through a telescope might glimpse a star formation.

In fact, Phinney, who works in the Cahill Center, has used a telescope to take a closer look at some of the prints installed in hard-to-reach spots in the building. He says that, given his familiarity with the Messier objects, it’s fun to see them portrayed in a way that invites further contemplation. He’s noticed his colleagues and visitors alike regularly stopping to peruse the art, too.

Messier, by the way, did eventually get credit for discovering 21 comets. He even earned a medal from Napoleon and the nickname “the ferret of comets” from King Louis XV. Ironically, these days, Messier is most famous for those 110 objects he tried to avoid.