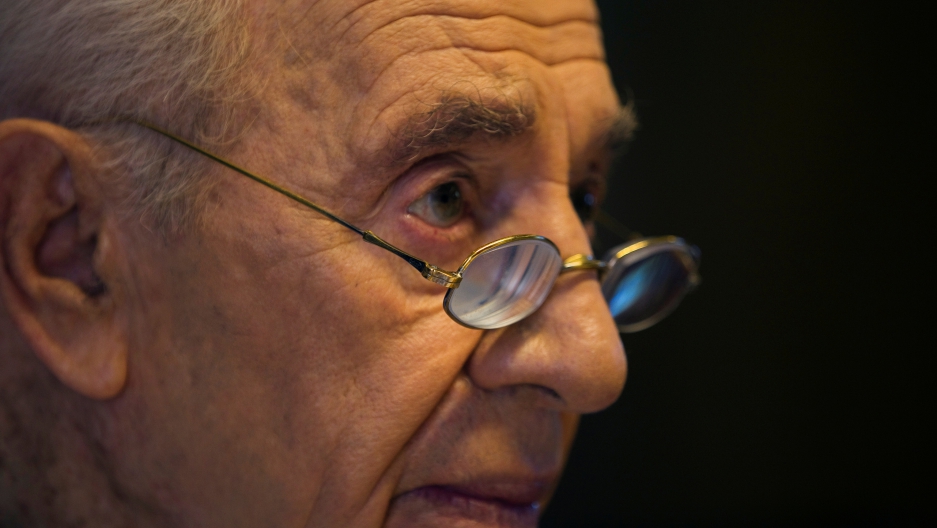 Israel's President Shimon Peres goes over his speech for the swearing-in ceremony of the new president, in his bureau at the presidential residence in Jerusalem, on his last day in office, July 24, 2014.

Israeli ex-president and Nobel Peace Prize winner Shimon Peres died on Wednesday, some two weeks after suffering a major stroke, triggering an outpouring of grief for the historic figure and beloved statesman.

Peres, who was 93, held nearly every major office in the country, serving twice as prime minister and also as president, a mostly ceremonial role, from 2007 to 2014.

He won the 1994 Nobel Peace Prize jointly with prime minister Yitzhak Rabin and Palestinian leader Yasser Arafat for his role in negotiating the Oslo accords, which envisioned an independent Palestinian state.

Peres died about 3 a.m., said Rafi Walden, who was Peres's personal doctor and also his son-in-law.

His family held a press conference later in the morning, praising Peres' tireless work ethic and what they called his devotion to peace.

"He had no interest other than serving the people of Israel," said his son Chemi, his eyes moist as he read a letter on behalf of the family at the hospital in Ramat Gan, a suburb of Tel Aviv.

US President Barack Obama immediately hailed Peres as a friend who "never gave up on the possibility of peace."

"There are few people who we share this world with who change the course of human history, not just through their role in human events, but because they expand our moral imagination and force us to expect more of ourselves," Obama said in a statement.

"My friend Shimon was one of those people."

Obama was among world leaders such as Britain's Prince Charles and French President Francois Hollande planning to attend Peres's funeral at Jerusalem's Mount Herzl on Friday.

Peres did not have a reputation in Israel as a tough negotiator. But he was an extremely shrewd and strategic negotiator, according to former US diplomat Dennis Ross. “He was someone I would describe not as a checkers player in negotiations, but a chess player. He was always thinking three or four steps ahead.”

“He also felt he needed to try to create a win-win situation,” adds Ross. An outcome couldn’t only be good for Israel, it had to be good for the Palestinians as well.

Ross worked with Peres on the Oslo Accords.

Peres was relentlessly optimistic, even as peace with the Palestinians seemed to be moving further away. His optimism extended into his whole approach to life.

Ross recounted how just a year ago, during a private lunch, Peres was focussed on new research into brain function and excited about the future and how this new knowledge could be applied.

“So here was a 92 year old man — focused entirely on the future, excited by this prospect of these breakthroughs, and feeling and thinking about all the things that could be done with it.”

“This man who was 92 was so very youthful in terms of his outlook and his excitement about new horizons. He never tired of looking at those new horizons. And in some ways, it was really his emblem.”

The mantle of hope

Peres has been “part of the fabric of the country” since its founding, says journalist Dina Kraft. She mentions how a comedy skit on the Israeli equivalent of Saturday Night Live, presented an imaginary future celebrating the 100th anniversary of the country, and of course Peres was still going and still in office.

“But I think he’s going to be most missed for being able to talk about peace without it sounding hokey,” says Kraft. “For being able to talk about peace and still have some sense that it might actually happen, and there could be a different future, even when things feel bleak. And now there’s no one really to pick up that torch and pick up that mantle, and I think Israelis are feeling a little bit lost without him today.”

Former US president Bill Clinton, who helped usher in the Oslo peace accords, said: "The Middle East has lost a fervent advocate for peace and reconciliation.

"I'll never forget how happy he was 23 years ago when he signed the Oslo accords on the White House lawn, heralding a more hopeful era in Israeli-Palestinian relations."

However, a spokesman for Hamas, the Palestinian Islamist movement that runs the Gaza Strip, welcomed his death and called him a "criminal."

The Palestinian Authority, based in the West Bank and dominated by president Mahmud Abbas's Fatah, had not commented.

While Peres has been lauded abroad and in Israel as a peacemaker, many Palestinians view him very differently, citing his involvement in successive Arab-Israeli wars and the occupation of Palestinian territory.

He was also prime minister in 1996 when more than 100 civilians were killed while sheltering at a UN peacekeepers' base in the Lebanese village of Qana, fired upon by Israel.

Peres had been in the hospital since September 13, when he was admitted after feeling unwell and suffered a stroke with internal bleeding.

There were signs of improvement last week, and on September 18 Peres's office said doctors planned to gradually reduce his sedation and respiratory support to judge his response.

But on Tuesday a source said his condition had taken a downturn and he was "fighting for his life." Family members arrived at the hospital.

In January, Peres was hospitalized twice because of heart trouble.

Peres had sought to maintain an active schedule despite his age.

When leaving the hospital in January, Peres said he was keen to get back to work.

"I'm so happy to return to work, that was the whole purpose of this operation," he said.

In March, he met British supermodel Naomi Campbell at his Peres Center for Peace during an event linked to International Women's Day. On the same day, he met visiting US Vice President Joe Biden.

Born in Poland in 1923, Peres emigrated to what was then the British mandate of Palestine when he was 11.

He joined the Zionist struggle and met David Ben-Gurion, who would become his mentor and Israel's first prime minister.

Beyond his accomplishments in the public eye, he was also seen as a driving force in the development in the 1950s of Israel's undeclared nuclear program.

The country is considered the Middle East's sole nuclear-armed nation, but Israel has never publicly acknowledged it.

Netanyahu made reference to Peres' work on the nuclear program on Wednesday.

"As a champion of Israel's defense, he strengthened its capacities in many ways, some of them still unacknowledged to this day," he said.

Despite his reputation as a statesman, he never managed to outright win a national election. Many in Israel opposed to the Oslo accords also blamed him for what they saw as their failure.

But in later life, especially during his time as president, he came to be widely embraced in Israel, while world leaders and celebrities sought him out, marvelling at his energy and intelligence.

He once confided that the secret to his longevity was daily exercise, eating little and drinking one or two glasses of good wine.