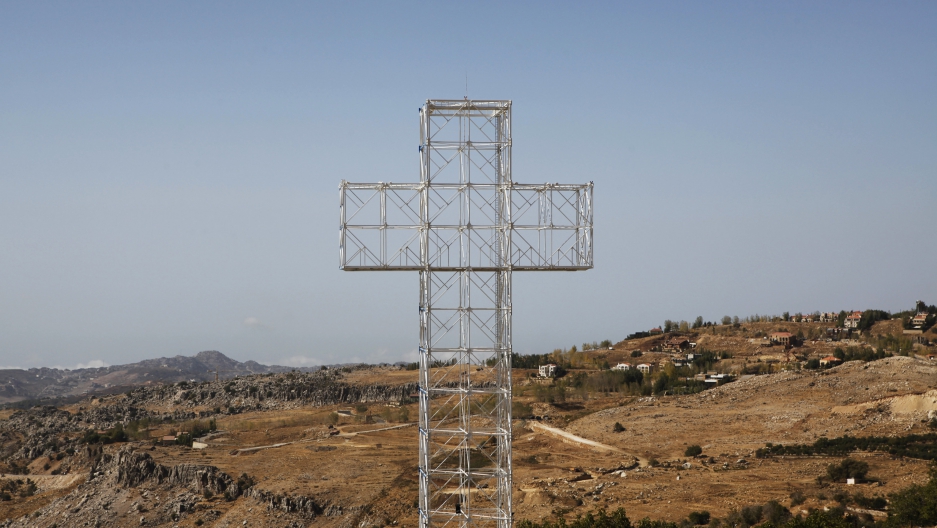 A giant cross stands on top of the Mount Qanat Bakish in Lebanon, in a photo from Oct. 1, 2010.

In a small yard by the side of the road in the Bekaa Valley, eastern Lebanon, Kim and David are watching over their students.

The couple moved from Texas five months ago to set up a school for Syrian refugee children. They called it the House of Love.

“We have nothing left in the States now. We sold everything,” says Kim. “We have a 10 x 12 [foot] storage unit with our family pictures and my favorite chair. That’s it.”

The couple, who asked for their last names not to be used, built the school from scratch, using money they fundraised in the US before coming. They staffed it with volunteers from around the world. All of them are motivated by a desire to help Syrian children living in desperate conditions. But there’s something else driving them, too.

“Actually it was God’s idea,” Kim says. She and her husband, middle-aged with eight grown children, had worked at their church in Texas and describe themselves as nondenominational Christians. During a previous visit to Lebanon to help refugees, they heard the call, as they put it, to return permanently.

“You know what, all kids all over the world just wanna be loved. They just want attention and they want to know they are worth something. That’s what we do here at House of Love,” she says.

A number of large, established Christian charities work with refugees in Lebanon, but not many people like Kim and David, who say they are here as independent missionaries, no big institution attached. It’s risky work, and raises a list of ethical questions.

Their school consists of two container buildings a few feet apart, with a school yard in the middle. It even has a sports court adjacent. Work was recently finished on a fence surrounding the property — a team had come from the US to build it after raising the money themselves.

Most of the kids who attend the school live in informal camps that dot the landscape in the Bekaa.

The Lebanese government and aid agencies have been overwhelmed by more than a million Syrians crossing the border to escape that country’s almost 6-year-old war. Many of the refugees here live in crippling poverty. 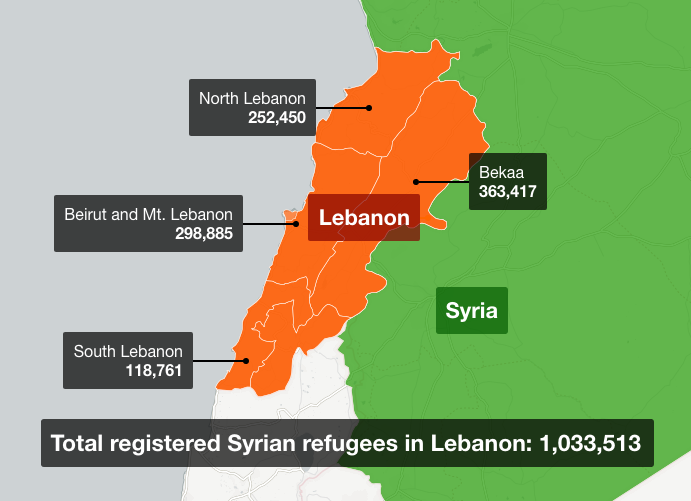 Registered Syrian refugees in Lebanon as of June 30, 2016. Source: UNHCR

The kids are mostly Sunni Muslims from across Syria. In the morning they receive English and Arabic lessons, then in the afternoon they learn about Jesus and the Bible. On the afternoon of our recent visit, the children were singing along to a music video called “Jesus Is My Sugar,” which showed adoring children gathered around Jesus while singing those words.

Missionary work like this is controversial in Lebanon. The country has a sizeable and influential Christian population of its own, but relations between Christians and Muslims here have a complicated past, to say the least. (See the 1975-1990 civil war, fought largely along sectarian lines. Relations are continuing to be rebuilt 26 years after the war ended.)

“People who might have good intentions, but don’t necessarily speak the language, don’t know where to go or what not to say or do, they might inadvertently cause more problems than good.”

Kim and David, who are learning Arabic, say they are aware of the potential issues with their work and are very upfront with the parents of the kids they’re teaching.

“The families around us that bring their kids here, they know that we are Christians from the States and they are OK with that. We let them know, ‘look, it’s in our nature, it’s gonna be in the way we teach morals and values. And are you OK with that?’ Of course! And if they are not, then they don’t come. This is neutral ground,” Kim says.

Still, this kind of work can be dangerous. Back in 2002, American missionary Bonnie Penner was fatally shot in the southern city of Sidon. Less than a year later, a Jordanian convert to Christianity was killed in a bomb attack on a European missionary’s home in the Lebanese city of Tripoli.

Extremists aside, many in the Muslim community don’t look kindly on any activity that could be perceived as Christian evangelizing.

David and Kim insist this is not what they are here to do.

“I know some that come here, that this is their main agenda, and they want to evangelize to see them converted from Islam. We’re not here to convert anyone,” says Kim.

“Our main agenda is not to see that they become a follower of Christ, but if they ever question us, we certainly share with them.”

More than 250,000 Syrian children registered with the United Nations as refugees in Lebanon are not in school. The true number is likely higher because many are not registered.

The House of Love caters to around 40 students who might otherwise not receive any education at all. The team of volunteers, which includes a Syrian former principal from Damascus, visit the camps and explain they are Christians and have a school nearby.

Not everyone is eager. The couple says they haven’t had a lot of trouble with locals, although David acknowledges they had to relocate the school when they first arrived due to “tensions.”

“We were very close to the [refugee] camp, there was a camp literally right behind us, and there was a lot of jealousy, sort of,” he says.

The couple doesn’t have to look far to see how things can get complicated for those wanting to convert, even if that is not what they are trying to do.

Christopher, a volunteer at the House of Love, is a Kurd from Iraqi Kurdistan, the semi-autonomous region of northern Iraq. He says he was a “good Muslim.” He prayed five times a day and went to mosque. When the Islamic State swept into northern Iraq, Christopher joined the Kurdish peshmerga security forces with his friend Elias, who was a Christian.

When Elias was killed, Christopher remembered what he had said about the Bible and decided to buy one.

“I stayed about two months at home not going out, just staying at home. And then I thought about what he told me about God, and I decided to buy a Bible and I felt like something is happening inside me,” he says.

His family found out, and did not approve.

“My father, at first he burned a bible. I bought a new one and then after one week he checked my stuff and found another one, so that’s why he tried to kill me. Because it’s like shame or to bring back honor or something.”

When asked if he worried whether the children at the House of Love would get in trouble with their family like he did, Christopher replies: “Yes of course, but that’s why we just talk through the story and watch movies about Jesus. We don’t tell them what to do. They are going to decide, not us.”

Many people, including Lindner, the historian, argue that supporting local organizations is the best way to help refugees.

“There are a number of organizations on the ground that have been here for a long time, that know the communities, that would love to receive funding, that would love to receive prayers. This would be providing jobs for individuals from the region,” she told The World by phone. “And if you were interested in maintaining Christianity in the Middle East, provide jobs for Christians in the Middle East, don’t displace them.”

Kim and David said they thought about working with a local organization, but it just didn’t feel right — they didn’t feel peace.

Today, they insist they are here for the long run, despite the danger.

“You have to understand that as a Christ follower, I don’t fear death. I know where I’m going, so it changes my worldview,” Kim says.

“Did I sign up to be a follower of Christ to be safe or to be happy? I signed up to follow Christ because of what he did for me. It’s in my heart to give back to him, and what he wants is to love on these people.”