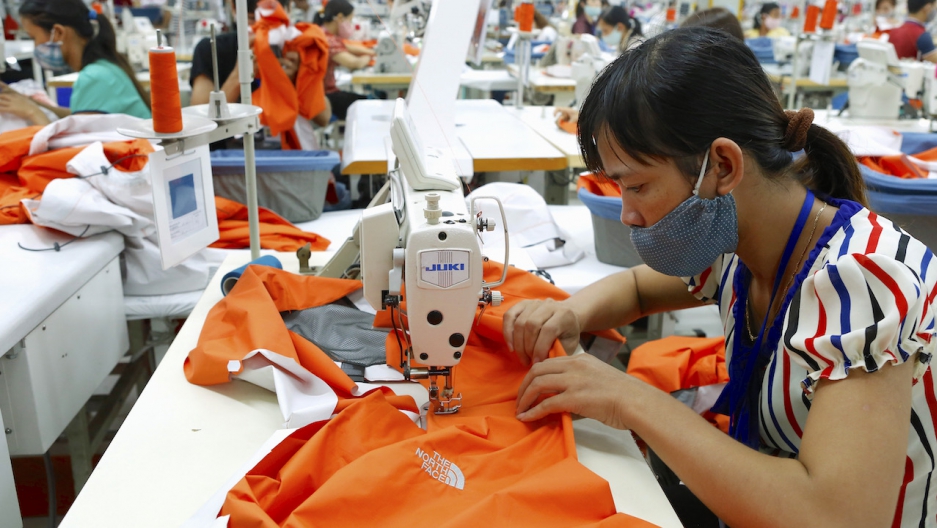 Laborers work in the Singlun Star garment factory outside Hanoi on Aug. 19, 2014. As Chinese manufacturing gets more expensive, some foreign companies are switching to cheaper Asian suppliers.

In his eyes, Beijing and amoral US conglomerates are entangled in a plot to vacuum up American jobs and sprinkle them across China. “Look at what China is doing to our country in terms of making our products,” Trump said at Monday’s presidential debate with Hillary Clinton.

“They’re using our country as a piggy bank to rebuild China,” Trump said. “We have to stop our jobs from being stolen from us.”

This might play well in American towns bled dry by the manufacturing exodus. But to many Chinese factory owners, it will sound bizarre and out of date.

Like America before it, China is now reeling from its own exodus of low-skill factory jobs. Just as America’s economy evolved beyond child labor and true starvation wages, China’s labor force is no longer defined by its destitute peasantry.

Yes, a Shenzhen factory worker’s life is still bleak by US standards. Factories in Ohio or North Carolina don’t house employees in dorms filled with creaky bunkbeds as they do in China’s industrial hubs. But Chinese factory workers do expect more cash than they once did.

Ten years ago, the average manufacturer in China got away with paying $1 per hour. Today, the minimum wage in various parts of China is double or triple that amount.

That’s way too high for many US-headquartered global conglomerates — and they’ll abandon Guangdong just as fast as they will Michigan.

These days, the pursuit of ever-poorer countries is driving US corporations to look outside of China. Many haven’t gone too far, however, as there are plenty of nations with feeble labor laws right in China’s backyard.

This phenomenon is best observed in the garment sector, the so-called “first rung” that societies cling to when climbing beyond a farming economy.

China still stitches plenty of American hoodies and jeans. In fact, nearly 40 percent of US clothing imports come from China. But a growing number of American brands — including Gap Inc., Nike and even the Donald J. Trump Collection — are made in impoverished countries nearby.

These are a few of the nations that, in Trump’s parlance, have “stolen” jobs from China:

There’s Bangladesh, where stitching clothes for wealthier nations (namely the US) has become a pillar of the economy. Its garment workers endure famously deplorable conditions for $17 per week.

There’s also Cambodia, where clothing makers earning 50 cents per hour are frequently berated and scammed, according to Human Rights Watch. In districts that churn out jeans and sneakers for American malls, factory workers have protested over pay — only to get violently subdued by Cambodian government forces.

And there’s Vietnam, perhaps the biggest winner from China’s rising wages. It’s now the second-largest source of imported US clothing.

Vietnam is favored by Nike, a corporation proclaiming a passion for helping young women of color. Still, according to an expose by journalist Maria Hengeveld, female Vietnamese workers who stitch its products are often “belittled and underpaid.”

When Trump portrays American corporations as merciless offshorers, he’s on to something. US clothing conglomerates have no misgivings about building factories in corrupt dictatorships. That keeps labor costs low enough for US malls to fill shelves with $25 hoodies.

But Trump’s targeting of China is a bit dated. As one China-focused consultant explained to the New York Times, presidential candidates who bemoan jobs fleeing to China are “screaming about yesterday’s problems.”

Meanwhile, in Beijing, officials are sizing up America’s political character. An op-ed published in the Global Times, a Communist Party mouthpiece, says these anti-China screeds reveal an “inclination toward populism or nativism.”

Americans are drawn to this rhetoric, the op-ed says, because they’re stricken with “dissatisfaction, uneasiness, anger and fear.”