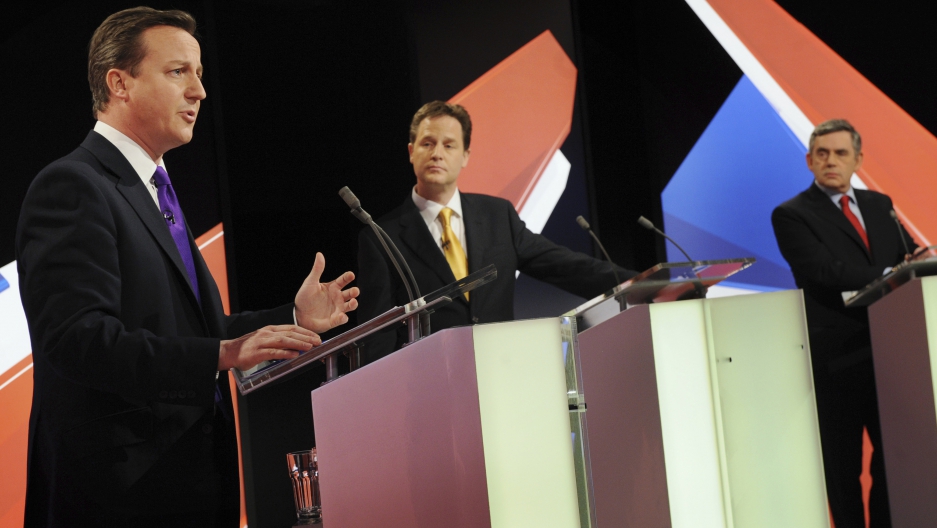 In the US, televised debates can change the direction of a campaign.

That’s been the case since the first-ever presidential debate in US history, between John F. Kennedy and Richard Nixon, exactly 56 years to the day before Hillary Clinton and Donald Trump squared off in New York Monday night.

But in Britain, political debates have a different history. In fact, the first televised debate between party leaders in Britain was only in 2010.

That's not to say 2010 was the first time a debate was proposed.

Just a few years later when Wilson was prime minister, his conservative challenger, Sir Edward Heath, asked for a debate. This time, Wilson was the one turning down the offer.

“You have an early pattern where the incumbent doesn’t want it, because after all, why give more room for the other guy to look any good?” says Moss, who has covered general elections in both the US and the UK.

“A woman called Margaret Thatcher was the challenger then, and she said no," he says. "[Because] having debates was not the British thing.”

Years later in 2010, the leaders of the Labour, Conservative and Liberal Democratic parties finally all agreed to a televised debate.

Moss says one reason it’s likely more difficult to organize a debate in the UK is because organizers need to wrangle three main parties instead of two. The country's most recent debate — the Brexit debate — only had two clear sides.

Moss says it’s impossible to say whether that debate changed the outcome of the vote, but it did change the way the British public views debates.

“I think it’s going to be very difficult for [politicians] ever to say ‘We don’t want to have TV debates any more because they’ve become such a feature of British voting,'” he says.

Moss says there’s a tradition of debate in Britain that predates anyone's political careers. In school, many children are trained in rhetoric. Moss himself was even a member of the debate team.

“You kind of look ridiculous because you’re 12 years old wearing a shirt, tie and jacket," he says. "You’re standing there pontificating like you’re at the despatch box in Parliament, and you’ve been doing this for 60 years. You use phrases like ‘Well, allow me to address the honorable lady over there.’"

It’s funny, he says, but it’s also an important aspect of British education, especially for privileged families like David Cameron's or Boris Johnson's.

And despite the difficulties facing debate organizers in the UK, debates may even be the reason these people went into politics in the first place, he says.