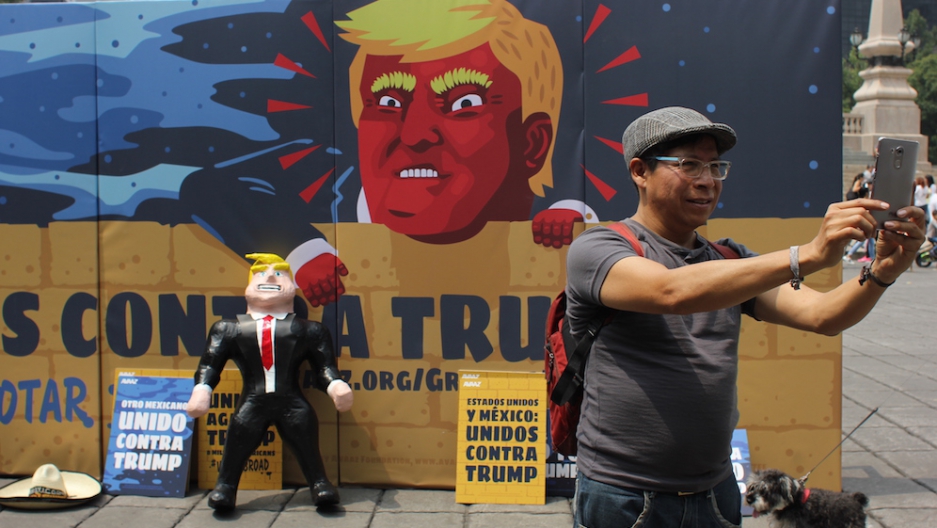 Piñatas and billboards against Donald Trump were one of Mexico City's latest efforts to get out the vote in the United States.

The US presidential debate made for a lively drinking game Monday night — in Mexico.

At a barbecue restaurant in Mexico City, patrons gathered to see Trump and Hillary Clinton go at it. And every time “Mexico” was uttered, they drank. (Trump mentioned the country six times, at least.)

A day earlier, Mexicans were out beating a Trump piñata.

On Avenida Reforma, Mexico City’s big and gorgeous boulevard, they arrived to blow off steam on the blond-topped papier mache doll. They held their middle fingers up toward a large, red cartoon of Trump on a billboard.

The online activist group Avaaz set up this Trump-bashing monument to harness electoral force in a country that has taken its share of punches from the Republican candidate. No, most Mexicans can’t vote in the US election. But more than a million US citizens visiting or residing in Mexico can — and so can Mexicans’ relatives and friends north of the border.

“In elections past, most of these people haven’t voted,” Joseph Huff-Hannon, the senior global campaigner for Avaaz, says of US expats and dual citizens in Mexico. “We want to make sure Donald Trump is defeated and defeated soundly, and we think that this previously untapped bloc of voters could be incredibly key in making sure that happens.”

About 8 million US citizens live outside the country, roughly the population of Virginia. But only about 15 percent of them vote, compared to 70 percent of Virginians. This is the “untapped bloc” Huff-Hannon is talking about.

Mexico is the biggest destination: An estimated 1 million US citizens live here, many for retirement. More than 20 million US tourists visited Mexico in 2013. 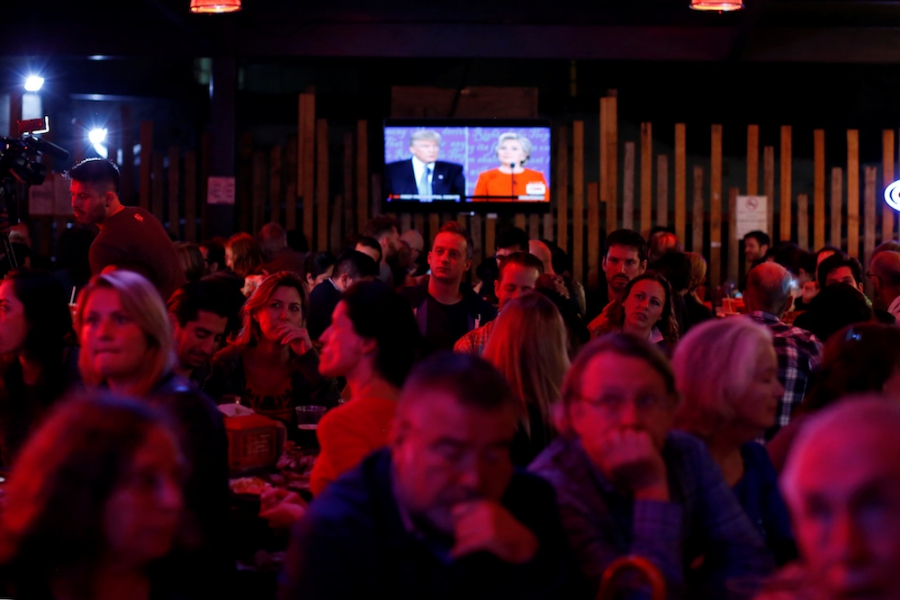 People including US Democrats living in Mexico watch the first presidential debate in a restaurant in Mexico City on Sept. 26.

Avaaz even hired a mariachi band to help draw a crowd on Avenida Reforma. Mexicans posed in front of the Trump cartoon with signs in Spanish saying “Another Mexican United Against Trump” and “US & Mexico United Against Trump.” The piñata got strangled over and over.

A representative of the Republican Party in Mexico did not respond to an interview request.

The activist group has carried out similar campaigns in Berlin and London, where hundreds of thousands of US citizens live.

But with the largest population of US citizens (your correspondent included), Mexico is the most obvious place to recruit voters abroad.

This voting bloc has a special kind of disdain for Trump. He kicked off his campaign 15 months ago calling Mexicans criminals and rapists, and assuring he would build a wall to keep them out of the US.

In August, the candidate visited Mexico, where he called President Enrique Peña Nieto a friend. Then he flew to Arizona, where he got right back to saying he was going to build a wall and make Mexico pay for it.

“Mexicans are really frightened of Trump as a candidate, as a possible president,” says Claudia Rios, a dual citizen who just registered to vote. “So I think all the Mexicans that have an option to do something about it, as I do, as my sister does, we’re trying to do something.”

Read more: Mexicans are determined to have the last laugh on Donald Trump

But Rios echoes a common sentiment in Mexico about the US elections: ambivalence toward the Democratic candidate.

Polls now show the candidates neck and neck. And even Mexicans without US citizenship are hoping to spoil Trump’s chances of winning in November.

“I think we are a force, the Latinos, especially Mexicans in the US,” says Juan Ricardo Robles, a Mexican citizen who came to take a photo with the Trump billboard. “Maybe we can echo this message to vote and make sure Trump doesn’t become president.”

He and his Colombian wife walked away, racking their brains for friends or family who are US citizens.

Avaaz is hardly alone in motivating Latinos against Trump. An online campaign based in Mexico is telling Latinos all over South and Central America “Diles que voten,” meaning tell your relatives in the US to vote. The campaign doesn’t tell them whom to vote for, but the organizers’ preference is pretty obvious.

It was said much more clearly by Vicente Fernandez, a legendary Mexican mariachi singer.

“Hillary we’re with you. You can count on our vote,” he sings in Spanish, decked out in an ornate sombrero and suit. “You’ll be our voice in the presidency.”

Even though Avaaz reaches more than a million people on Facebook, it’s hard to know if these voters abroad will have an impact. Americans living overseas are a notoriously enigmatic group. A Migration Policy Institute report from 2013 trying to estimate the total was called “Counting the Uncountable.” Measuring the number of US votes from abroad is even harder. There’s no country-by-country count of incoming votes.

Still, Mexicans know they can influence the election. Across from the Avaaz event, a group calling themselves the Binational Coalition Against Donald Trump handed out fliers.

“It’s hard just to see the way he feels about Mexicans, about Mexico, about Muslims,” says Alondra Muriente, a US citizen born in Puerto Rico who now splits time between Mexico City and Chicago. “He’s a hater and we don’t need that. This world is already a mess and we need love, we need peace, we need compassion.”

“Yes yes yes!” yells Lenore Cohen, out of nowhere. “I agree with everything you said.” The retired New Yorker has lived in Mexico for 29 years. She and Muriente begin chatting about how sad it is that few Americans vote from abroad. Muriente’s New York-born mother has never voted.