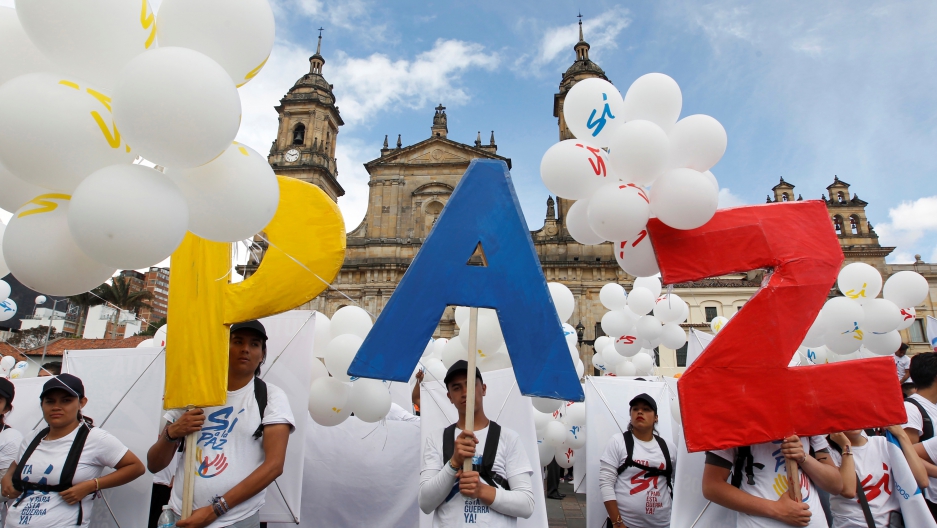 Colombians gather in Bogota’s Bolivar Square, to mark the signing of a historic peace deal with the FARC rebels.

Colombia is on the threshold of a new era: a peaceful one.

For 52 years, there's been violence between the government and rebels who see themselves as defenders of the poor.

The main rebel group, the Revolutionary Armed Forces of Colombia, the FARC, formally signed a peace deal with the government Monday in a solemn ceremony in the coastal city of Cartagena.

But there's a hitch. Colombians have to approve the deal in a referendum this weekend. And there is a powerful "no" campaign.

The vote is dividing families.

Reporter Luis Gallo is a US citizen who was born in Colombia, and he says it’s dividing his own family.

Like so many Colombians and Colombian Americans, Gallo has a personal stake in this story. His own father was killed by the FARC.

Then FARC attacked. Gallo’s father was captured. He was recognized.

“They knew my father because of his previous operations in the region, with the military,” Gallo says. His father was tried in the jungle by a rebel court and sentenced to death.

Gallo was just 6 when he lost his father. He’s planning to vote in favor of the peace deal.

“I don’t want any more lives to go like this,” he says.

But his family does not all agree. His mother and most of his aunts and uncles are considering voting "no," while he and his cousins plan to vote "yes."

Gallo’s mother does not like the rebels getting what she calls "amnesty." Under the agreement, those on both sides who confess their crimes fully will be obliged to do community service, but nothing worse. She is also critical of the rebels being granted a political role in Colombia.

They debate around the dinner table, and Gallo says that’s a great thing.

“I don’t love my mother any less, because I disagree with her,” he says. “She did lose her husband.”

“But we do have a dialogue,” Gallo says, “and I think it’s interesting what’s happening because all these dialogues are starting on this small scale, within the family. And then it’s transferring to a larger public sphere. You know, we’re practicing democracy, we’re practicing a way of sharing our ideas without resorting to guns and violence.”